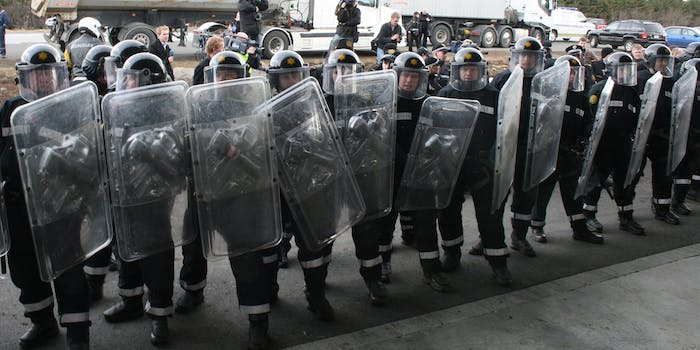 Arizona took a tough loss in the NCAA men’s basketball tournament Saturday night, which to Wildcat fans is apparently the kind of trauma that makes you want to overthrow your government.

A series of remarkable pictures, YouTube videos, and Vines depict students in Tucson clashing with local police, even though reports indicate neither the students nor cops had anything to do with Arizona’s one-point overtime loss to Wisconsin. One Vine captured a man confronting police while he’s shot in the chest by what the police say were “pepper balls.”

One YouTuber caught the same incident on video, though he seemed more concerned with recording a possible “gone wild” moment than the insurrection.

Arizona Daily Star photographer Kelly Presnell caught one fan staring down riot cops like they were a tank in Tiananmen square.

A lone man confronts a line of Tucson Police as #ArizonaWildcats fans get out of hand. http://t.co/34p26udRVj pic.twitter.com/ZS1ArgDSVh

The crowd dispersed after police set off pepper canisers. Incredibly, according to local news reports, the incident resulted in no major injuries and no major property damage. Police arrested more than a dozen people.

Cops shot some stuff, tear gas type thing. Crowd moved all he way back toward CVS. Cops in front of bens

My throat has never burned this much in my life.