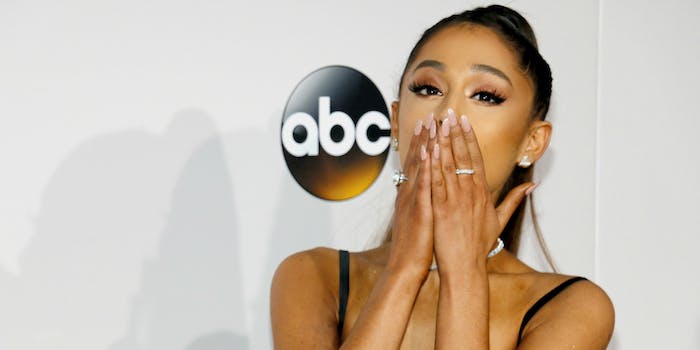 Ariana Grande, Kim Kardashian, and the war on ‘unlikable women’

What do you have to do to be the most-hated male celebrity of the past year?

According to the Hollywood Reporter, nearly 50 women have to come forward to accuse you of sexual assault over the course of your five decades in show business. In the process of the long, painful trial against you in the court of Internet public opinion, so many women will accuse you of drugging and raping them that they can’t all fit on the cover of New York magazine. The case against you is so grim that even your staunchest defenders have turned against you—even Whoopi Goldberg, who is still batting for Mel Gibson and Roman Polanski.

But to be the most-hated woman of the moment, all you have to do is be kind of a brat. Former Nickelodeon star and “Love Me Harder” singer Ariana Grande came in second in THR’s biannual Q Score ranking, which ranks famous people by their popularity—or in Grande’s case, their unpopularity. Following an incident where Grande licked a donut and claimed to hate America, her negative Q Score has increased by 26 points, almost as much as Cosby’s 43-point climb.

Other stars who have seen their stock fall in the past year are Adrian Peterson and Robin Thicke; the latter never recovered from the critique that his hit single “Blurred Lines” promotes rape culture, while the former was accused of child abuse.

Following an incident where Grande licked a donut and claimed to hate America, her negative Q Score has increased by 26 points, almost as much at Cosby’s 43-point climb.

Both of these are valid reasons to dislike someone, but for some reason, they don’t make you more hateable than Grande or Kim Kardashian. While Grande and Cosby have seen the biggest drops in likability over the past year, Kardashian was the most-hated celebrity overall. She had an astonishingly high negative Q score of 71.

Other than being irritatingly ubiquitous or hating America, what exactly are their crimes? Has Kim Kardashian ever been accused of plagiarism—like Robin Thicke? Has Ariana Grande ever been accused of being a fraud by an Ivy League university—like Dr. Oz, whose negative Q Score increased just 16 points in the past year? Has Kardashian ever publicly threatened her partner—like Shia LaBeouf, who didn’t even make the list? Ray Rice was caught on tape attacking his wife and was suspended from the NFL for it, and his actual illegal behavior didn’t merit a mention either.

The playing field here is so uneven that it’s absurd, as women are docked so much more severely for laughably trivial things. This is the case whether you’re a singer, a reality TV star, or literally any person who dares lives in public while owning a vagina. In a 2013 Star magazine poll, Gwyneth Paltrow ranked atop America’s list of the most-hated celebrities, a survey in which two-thirds of the entries were women.

As I wrote for the Huffington Post at the time, what’s remarkable about the survey is how transparently it shows the gender differences in accountability for men and women. Kristen Stewart, LeAnn Rimes, Ashton Kutcher, and Sandra Bullock’s ex Jesse James all found themselves on Star’s list after high-profile cheating scandals, yet Stewart (at #2) and Rimes (#12) ranked much higher than Kutcher (#13) or James (#19).

Other than being irritatingly ubiquitous or hating America, what exactly are their crimes?

Chris Brown—who publicly beat Rihanna, his former girlfriend—almost got left off, all the way down at #20. A year later, Brown climbed all the way up to number two on the Star list, but he was still bested by Kim Kardashian, who shared the top spot with her husband, rapper Kanye West. And across the list, a familiar pattern emerged: 14 of the 21 entries were women, whose descriptions were peppered with adjectives like “difficult,” “intolerable,” and “bratty.”

Across the Internet, it’s actually hard to find a case where a man ranks in first all by himself. On BuzzLamp’s most-hated list, Kris Jenner and Kardashian come out on top, and hating them more than criminals, abusers, or alleged rapists isn’t even all that culturally specific: They also are the “winners” of South Africa’s Channel 24’s unlikability survey as well.

It’s telling that last week’s viral headlines were dominated by a Florida news anchor walking off set to take a “brave” stand against covering the Kardashians—while men bravely get a pass. While “Blurred Lines” was called “the most controversial song of the decade,” radio stations across the country actually played it more; it was one of the biggest hits in Billboard history. Bieber recently had a top 10 single with little fuss, and in the past year, Chris Brown has had two Top 40 hits.

But a week after Grande’s donut-licking incident, her single “One Last Time” disappeared from the Hot 100 entirely. It was yanked quicker than you can say Dixie Chicks.

While the cycle of the Internet is “here today, forgotten tomorrow,” this irrational hatred sticks—for women. A year after LeAnn Rimes’ infidelity landed her a mention on that star list, she rose even higher the following year—all the way up to number five—even though the public apparently forgot about Ashton Kutcher and Jesse James.

It’s telling that last week’s viral headlines were dominated by a Florida news anchor walking off set to take a “brave” stand against covering the Kardashians—while men bravely get a pass.

When I was having lunch with a friend last week, we ran into an acquaintance who still can’t stand Anne Hathaway, following a series of awards speeches she gave for her performance in Les Miserables in 2013. At the time, BuzzFeed maturely summed up her the criticisms of Hathaway as “her face” and “she looks stupid.” But the public has yet to forgive and forget: Even as late as last week, the Daily Beast was waxing about “the persecution of Anne Hathaway.”

It’s telling that during that time, Hathaway all but vanished—aside from a supporting role in Interstellar. This October’s The Intern will be her first lead role in a studio movie in four years.

To a passive observer, all of this hatred directed at women like Grande and Kardashian might seem ridiculous; its effects are anything but. Hathaway’s disappearance wasn’t an accident: This hatred not only punishes those who don’t fit whatever impossible standards we’ve set for women today, it encourages women to stay silent—or just go away. After all, for every man who gets a round of applause for calling women he doesn’t like “fat pigs,” there’s a thousand people cheering him on.