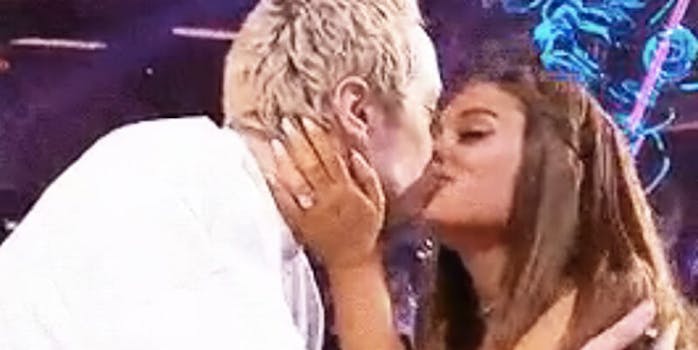 Get a room, you two.

Ah, the great Ariana Grande and Pete Davidson romance. Shortly after going public as a couple, the unlikely duo announced their quickie engagement to more than a few raised eyebrows—but it’s hard to argue that the pair doesn’t have chemistry. Heck, an entire new meme was even conceived to describe the inexplicably overwhelming attraction Grande has for her boo.

Which brings us to Monday night’s MTV Video Music Awards. Grande performed her latest single “God Is a Woman” on stage at the event at Radio City Music Hall, where she was also nominated for five awards. Davidson was naturally there by her side to root his lady on, and when Grande was announced as the winner for the best pop music video for “No Tears Left to Cry,” the two locked lips in a kiss for the ages.

The moment was quickly turned into a GIF and spread around Twitter as people made jokes and simultaneously seethed with envy over the magnetic attraction between the two.

this gif saved my life https://t.co/Tze4cMwJ5J

This man truly has her soul https://t.co/VH0MJ8jfqH

please stay away from me if your dick is this powerful https://t.co/k13nMRTU1X

A lot of people also had the same joke, because … well, come on.

this babe is dickmatized https://t.co/e3GCyJx4q5

I’m tryna be this in love or at least this dickmatized https://t.co/j7UKfCgH5F

The pair may have rushed into this whole engagement thing pretty quickly—which usually does not bode well for a lasting relationship. However, before they started dating both were in long-term relationships—Grande with rapper Mac Miller and Davidson with Larry David’s daughter Cazzie Davis.

Whether or not they can keep this level of infatuation going remains to be seen, but in the meantime it’s safe to say most of us are extremely here for it.