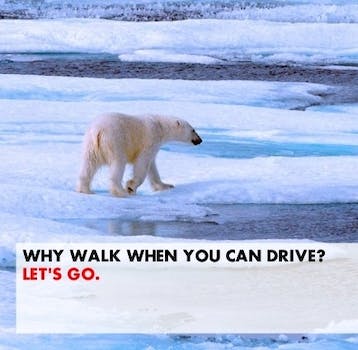 A hoax campaign against Shell Oil is heating up again—thanks to a Twitter account that claims to be handling Shell's damage control.

The defiant nature of the human spirit means people will do exactly what you tell them not to. A Twitter account purportedly belonging to oil firm Shell encouraged tweeters not to share links to a website spoofing the company. It’s had the opposite effect.

The website, Arctic Ready, was created by Greenpeace last month to attack Shell. It picked up a ton of attention last month over apparent user-generated ads that were actually campaigning against Shell drilling for oil at the poles.

Several weeks later, people are still tweeting about the site and the ads, spurring a new account, @ShellIsPrepared into action.

@ShellIsPrepared tweets at people sharing links to the Arctic Ready Let’s Go! site, encouraging users to stop posting about the spoof ads. On the surface, it’s reasonable to assume Shell would not want people to visit the site, but the links reek of desperation. @ShellIsPrepared has tweeted hundreds of times since being created Tuesday, with apparent threats of legal action directed at those who fail to comply with demands. There are some hints that the account does not actually belong to Shell, though.

In response to @timdee_ questioning asking why Shell simply did not redirect the Arctic Ready site’s pages elsewhere, the person behind the account wrote: “Too late now. The damage has been done. Next time we’ll have a disaster response plan prepared ahead of time.” That certainly seems like a dig at BP’s failure to handle the 2010 Gulf of Mexico spill.

Twitter also lets you view from which client (Twitter’s smartphone apps, HootSuite, TweetDeck, etc.) a tweet was sent. @ShellIsPrepared’s tweets appear to have been sent by the “Shell Disaster Response Team.” It does not appear such a thing exists.

It’s not entirely clear if @ShellisPrepared is a parody, but all signs point towards that being the case. Either way, it does not seem the account will cap the well of Arctic Ready tweets any time soon.