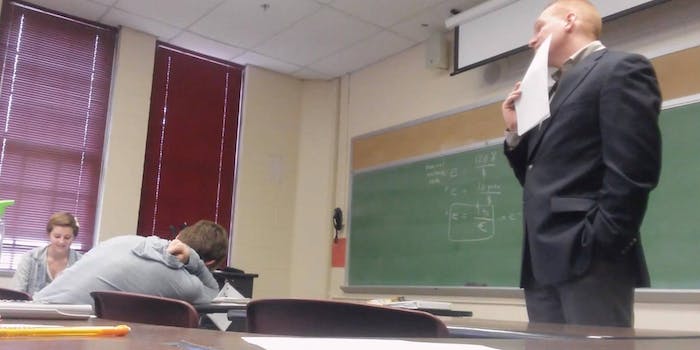 A professor’s class policy mandates that every incoming call has to be broadcast on speakerphone.

An Aquinas College professor’s class policy mandates that every incoming call has to be played on speakerphone. On April 1, his students came up with a brilliant way to use that to their advantage.

A woman gets a call from a friend pretending to be a Pregnancy Resource Center representative. Her tests came back positive, the caller says, and since the baby’s father is no longer in the picture, she has a few options available.

“That’s OK,” his student tells him. “I’ve been expecting this, and I already know what I’m going to name the baby. …”

Prof’s reaction is priceless. He seems like a great guy, too. He’s embarrassed, but instead of storming out of the room, he says, “I will treasure that! Bonus points!”

What makes the clip even better is that it doesn’t appear to be any kind of corporate branding stunt. It’s back-to-basics April Fools’ Day hilarity: a bunch of kids with no ulterior motives other than the desire to make their teacher look like an idiot.