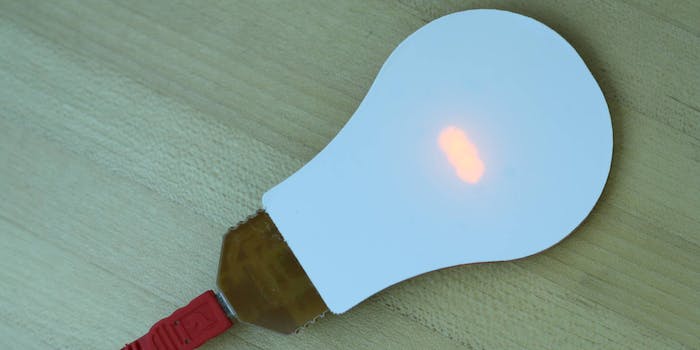 Photo via David Mellis/Flickr (CC BY 2.0)

Like most holidays, April Fools’ Day has been ruined by brands.

The champion of this competition, our benevolent overlord Google, opened the day with a self-driving bicycle, delivery by parachute, and a “mic drop” feature in Gmail. One of the reasons Google’s self-aware humor works so well online is the complete and utter weirdness of what the company actually can do. If you went back to 2004 and told someone a search engine would one day have a picture of their house (and everyone else’s), they’d assume you were joking. If, in 2009, you told someone the Obama administration would have to seriously consider the regulation of self-driving cars before he left office,  they also might check their calendar for April 1.

But such is our reality—made so absurd by the pacing of technological development even the blatantly ludicrous has become questionably possible. After all, does delivery by parachute seem any more believable than delivery by drone? Does a “mic drop” feature really stretch the imagination in a world where Yo was a thing? Some of the most serious minds of our time are pondering our possible death by superintelligent android—who’s to say what’s possible and what isn’t?

One of the reasons for this is the acceleration of the pace of technology, primarily propelled by that-thing-you’ve-heard-of-but-only-kinda-understand, Moore’s Law. By this law, the processing power of microchips doubles every two years, exponentially pushing the limit of what is possible with technology. This makes it really hard for anyone, but especially a layman, to predict what can and what will be on the market in just a few years. Hence the ongoing battle between techno-optimists and those who say we’re doomed to a jobless, mundane future ruled by machines of never-loving grace.

Backed by this is the exceedingly and often terrifying nature of our national politics. Not just the political rise of an egomaniac so absurd The Simpsons predicted his presidency twice, but the fact that the Willy Wonka of a crazy racist factory is surging in popularity just as we’re saying goodbye to our nation’s first black president. Enhanced by the fact that we could be welcoming our first female president to succeed him, and watching the news does start to feel like watching a Mike Judge comedy.

This does (or should) put an emphasis on journalists and news consumers alike to proceed into the future with caution. The absurd promises of corporations and politicians are made less absurd with each passing day, ensuring people’s ability to believe things that might seem ridiculous to most. Without the verification of a responsible news media, people are left to the whims of brands and bad pundits. And as the Internet worsens our political polarization by pointing us in the direction of only the information we’re comfortable with, It’s especially important to have some safeguard filter between reality and the bullshit.

Without the verification of a responsible news media, people are left to the whims of brands and bad pundits.

The biggest piece of evidence for this need is the display of people who struggle to tell the difference between the witty imagination of brands and satirists and our own, special-kind-of-screwed-up reality. Literally Unbelievable is a website which captures people reacting to articles from The Onion as real life, no matter how absurd (“Chicago Police Department To Monitor All Interactions With Public Using New Bullet Cams”). Jimmy Kimmel has delighted himself and others (but mostly himself) hy fooling news anchors with fake, planted viral videos.

But this is the point of good satire—it should illuminate the silliness of our current world by sounding almost, but not quite, just like it. April Fool’s Day and The Onion should mimic reality just like a parody or impression is better the closer it resembles its target. For brands, the jokes unleashed on the Internet today are meant to bring to light things they want you to believe are real—Google is so awesome, we can do anything! Look at this robot bicycle! Haha, just kidding! That’d be just like us though (and also we know everything about you and all your loved ones and are filthy rich for it).

Whenever a brand attempts to be your buddy or share a chuckle with you, they’re trying to convince you of something. They are, by definition, forces of persuasion and, like all persuasion, need to bend reality just slightly around their own desires in order to get you to do what they want. When they play a prank or “unveil” some impossibly strange product to get attention, that company is hoping you’ll believe it for just long enough to associate a dopamine rush with their logo. This is, after all, what all advertising is.

April Fool’s Day is just the only day they’re honest about it.