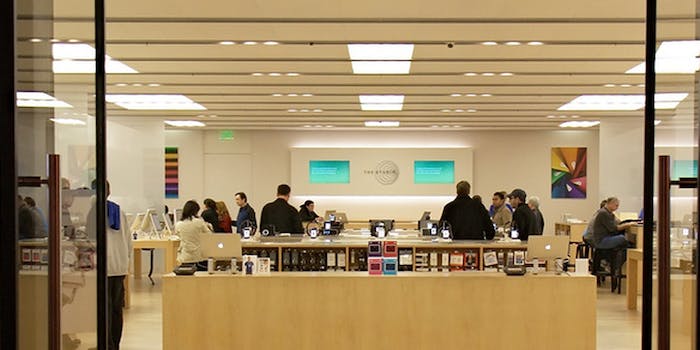 The billionaire is perfectly poised to drive market trends via the social media service.

Billionaire activist investor Carl Icahn is well-known in financial circles for gaining an outsize influence on corporations, often by acquiring a controlling stake and getting his own hands dirty. So: what to think about the news that he has a large position in Apple Inc. and believes its stock is undervalued in the mid-$400 range, as he stated yesterday on Twitter?

We currently have a large position in APPLE. We believe the company to be extremely undervalued. Spoke to Tim Cook today. More to come.

Had a nice conversation with Tim Cook today. Discussed my opinion that a larger buyback should be done now. We plan to speak again shortly.

The markets had a fairly good idea what it meant, anyway, and drove Apple’s usually flat share price up 5%, to nearly $490. Today it crossed the $500 threshold, reaching a high of $504.25, and has been hovering around that level all afternoon.

That spike effect has raised the question of whether Twitter may become a go-to platform for market manipulation—after all, this is the sort of information often reported by the Wall Street Journal and similar publications, not blasted directly to professional and wannabe traders alike. Icahn has only posted 12 times so far on the social media service and already has 55,000 followers, including rapper Lil B.

Even as Apple enjoyed a boost (still nowhere near its 52-week high of $705.07, however), Twitter users familiar with Icahn’s reputation as a merciless corporate raider with some huge flops on his résumé alongside the daring successes, responded to his tweets with a mixture of skepticism, pessimism, and flat-out sarcasm. 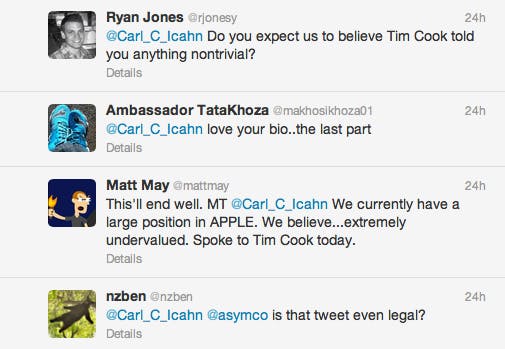 The tweet about Icahn’s bio referred to his aphoristic comment that “Some people get rich studying artificial intelligence. Me, I make money studying natural stupidity.” The implication, again, is that with a few deft keystrokes, Icahn can send people stampeding to artificially drive up the cost of shares he already owns, expanding his already formidable wealth.

The question is, how eager are you to help him?