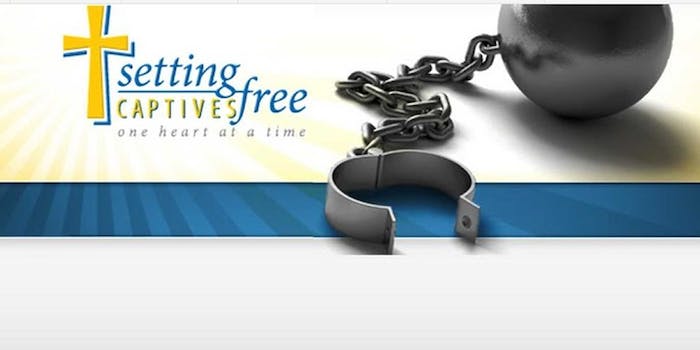 "Curing" homosexuality? There's an offensive, unscientific app for that.

Are you gay but want to “be cured?” There’s an app for that.

Setting Captives Free, a non-denominational ministry led by Mike Cleveland that helps individuals “find freedom from habitual sins and learn to grow in grace.” They’re able to do this via their online courses, which offer 60-day cures for gambling, drug addiction, and, yes, homosexuality. These courses are also available in the form of a phone app, which were made available earlier this week on iTunes and on Google Play.

“Despite what you may have heard elsewhere, you do not have a ‘homosexual gene,’ nor were you born this way with no hope of freedom,” the app’s description for the iTunes store read.

“You can be set free from the bondage of homosexuality through the power of Jesus Christ and the cross!”

Unsurprisingly, the existence of such an app has not gone over well in the gay community. On Wednesday, AllOut.org launched a petition demanding that both Apple and Google pull it from their stores.

“Practices that try to change people’s sexual orientation have been denounced by the American Psychiatric Association, Pan-American Health Organization and many governments,” the petition, which has as of this writing collected 65,153 signatures, reads.

“Make sure your stores aren’t promoting this kind of dangerous hate.”

Apple heard the tens of thousands of signatures and took down the app within the first 24 hours of the AllOut campaign. Google has yet to take action.

In the interim, many have taken to the app’s review page to either lambast it or ridicule it (it currently has a 1.5 star rating, with 321 total reviews).

“This is the best app ever!” mocked user Gary Ryan.

“Here I was, all totally gay and stuff. Then I installed the app, and God came out of my Galaxy Nexus, flew right into my penis, and my gay was gone! I ran right out the door and banged three real live chicks in the first hour! It was awesome!”