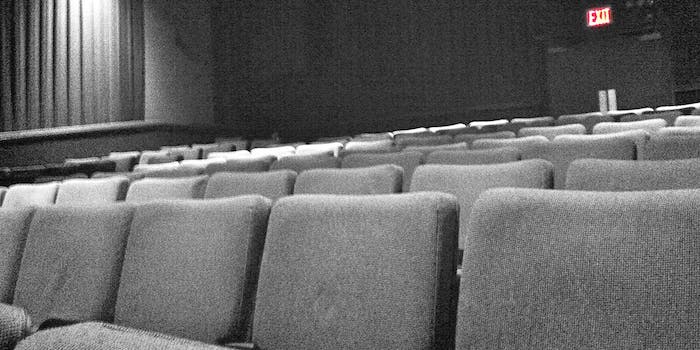 He was carrying a backpack at the time of the shooting.

Police have killed a shooter at a movie theater in Antioch, Tennessee.

The suspect reportedly died after a shootout with several officers at the Carmike Hickory 8 theater in Antioch, according to the Metro Nashville Police Department.

At least two people were injured during the attack, reports WKRN.

At least 2 people were injured when the suspected gunman entered the theater and began attacking patrons: http://t.co/8uCBn4ElDu

Three people are reportedly being treated for exposure to pepper spray.

The shooter, whose identity has not yet been released, was armed with a gun and a hatchet, according to Metro police spokesperson Don Aaron. One moviegoer may have been injured by the hatchet, he said, but that has not yet been confirmed. Two backpacks were left behind by the shooter; a bomb disposal team is currently investigating.

Officials at the nearby Vanderbilt Hospital told local news station WSMV-TV at 2:28pm CT that they were not expecting any gunshot victims.

Suspect was inside a showing of Mad Max when the melee broke out. Responding officers fatally shot him inside the theater. @Tennessean

A police dispatcher confirmed that the shooting was reported at 1:13 pm CT.

According to witnesses, police and assailant exchanged gunfire at Antioch Movie Theater

At least three emergency crews have been reported in the area, including a police SWAT team. And police have cordoned off the nearby Ford Ice Center and Global Mall.

Update: 3:03pm CT, Aug. 5: The gunman’s name has not been released, but the police have shared a few details.

#Nashville Police: Suspect was wearing a surgical mask. He is 51-year-old local man. (Name not given)

Update: 7:50pm CT, Aug. 5: The shooter has reportedly been identified.

The situation is currently developing.

Photo via Sarah Ackerman/Flickr (CC BY 2.0) | Remix by Jason Reed