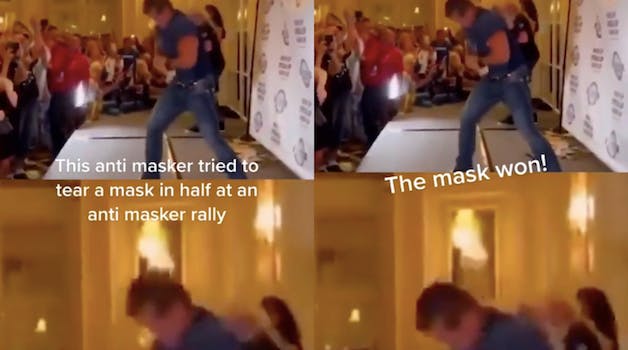 ‘The mask won’: Anti-masker tries and fails to rip mask in half in viral TikTok

As he struggles, the crowd goes silent and just stares at him.

A TikTok video making its way around the platform shows an anti-masker trying—but ultimately failing—to rip up a face mask. The short clip shows him struggling as people watch and cheer.

According to the text overlay on the video, which was posted to the platform by MediasTouch on Sunday, the embarrassing moment happened at an anti-mask rally.

It’s unclear where or when the rally took place, but in the video, a man can be seen on stage hyping up a crowd as he holds up a mask. As the crowd roots for him, the man attempts to tear the mask up, but he is unable to. He continues to try, and as he clearly has trouble ripping it up, the crowd goes quiet and everyone just stares at him.

The video currently has over 107,000 views and over 20,000 likes. While it’s unclear what the political affiliation of the man, or other rally attendees, is, the comments section is filled with people saying the clip perfectly exemplifiesTrump supporters. “Trumpies in a nutshell,” one person commented, “All muscle no brains.” Another person wrote in the comments, “More proof that masks work.”

There are also comments poking fun at how he may not have been able to rip the mask but may have “ripped his pants” and “definitely popped a blood vessel.”