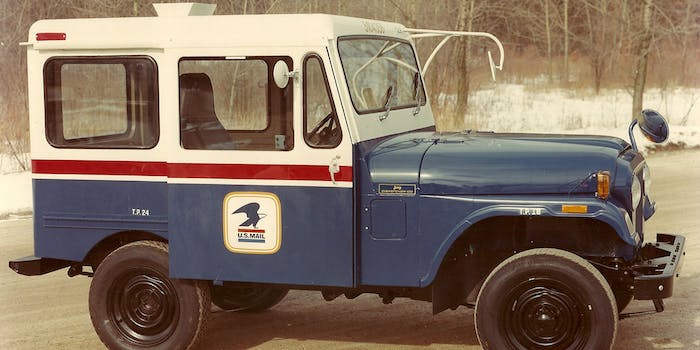 The secret anti-gay history of the U.S. postal service

The recent addition of Harvey Milk to USPS stamps was a sign of change in more ways than one.

There were many signs of change at the recent ceremony in the Old Executive Office building to roll out the new forever stamp honoring Harvey Milk. Anne Kronenberg, who served as Milk’s campaign manager when he ran for the San Francisco Board of Supervisors in the 1970s, remembered that their campaign was so underfunded that they didn’t even have money for postage stamps.

Milk was one of the first openly gay elected officials in the U.S., but this week there were dozens of openly gay mayors, state representatives, several members of Congress, and U.S. Senator Tammy Baldwin in attendance. The sitting president is an unprecedented gay rights supporter who has delivered on many of his promises to the community.

But as I watched I thought of another, overlooked sign of change.

Here was the U.S. Postal Service honoring a gay movement leader, when 50 years ago this agency’s predecessor, the U.S. Post Office, was actively working to suppress that movement. Though largely forgotten today, through most of the 20th Century, the Post Office employed thousands of postal inspectors to enforce the Comstock Act, which prohibited sending material deemed “obscene” through the U.S. mail.

Even as the Supreme Court liberalized definitions of obscenity, the Post Office fought back with periodic public campaigns against the dangers of “smut” allegedly invading American homes. Gay commercial and social networks were some of the agency’s prime targets.

In 1953, the Post Office declared ONE magazine, the first widely distributed gay news and features outlet, unmailable. The editors of ONE fought back, taking their case all the way to the Supreme Court, which ruled in 1958 that mere discussions of homosexuality did not constitute obscenity, paving the way for today’s LGBT print media.

The Post Office also sought to suppress the even more popular physique magazines, which connected gay men throughout the nation by offering the first widely available homoerotic imagery. Bob Mizer, the publisher of Physique Pictorial, was one of many who went to prison for marketing coy pictures of men in posing straps to gay men.

The Post Office’s relentless campaign intensified in the 1960s, when Postmaster Arthur Summerfield announced an intensive investigation by postal inspectors had uncovered “one of the most vicious, filthy, and widespread” pornography rings. They had uncovered a 750-member pen pal club of gay men who subscribed to a muscle magazine available on every newsstand in America.

Of the 50 members indicted, two attempted suicide. Caught up in the dragnet, teachers in Illinois, Maine and Michigan were suspended. Gay men cancelled subscriptions and self-censored their correspondence.

As part of their surveillance efforts, postal inspectors infiltrated mailing lists under assumed “test names” and then worked with local police to conduct sting operations on unsuspecting subscribers. In other cases, they made “educational visits” to subscribers or their employers. Postal inspectors threatened a Yale undergraduate who received photographs in plain brown envelopes from the “Athletic Model Guild” with criminal indictment if he did not confess to his parents and seek counseling.

The words and photos that postal inspectors objected to would hardly raise an eyebrow today. They were no more racy or revealing then those of similar heterosexual correspondence or imagery.

But like many public officials of the day, they felt that open discussions of homosexual activity or displays of male frontal nudity “promoted homosexuality” in American society and thus merited suppression. And in way they were right—these early commercial and publishing efforts allowed the LGBT community to find itself and connect for the first time on a national scale.

Although the Post Office lost most of its obscenity cases in the courts, it continued to bring lawsuits that bankrupted many burgeoning gay magazines and mail-order businesses. It spent millions of tax payer dollars investigating and prosecuting alleged offenders of it’s own particular notion of “obscenity.” It’s extra-legal tactics of harassment and intimidation cost innumerable jobs. It kept people in the closet.

How far we have come that an agency formerly engaged in a campaign to suppress the gay movement now honors one of its leaders with a stamp. As we celebrate Harvey Milk, let us also remember the unsung victims of the Post Office’s long-fought war on obscenity.

David K. Johnson is the author of The Lavender Scare: The Cold War Persecution of Gays and Lesbians, teaches at the University of South Florida. This article was originally featured on the Huffington Post and was reposted with permission.