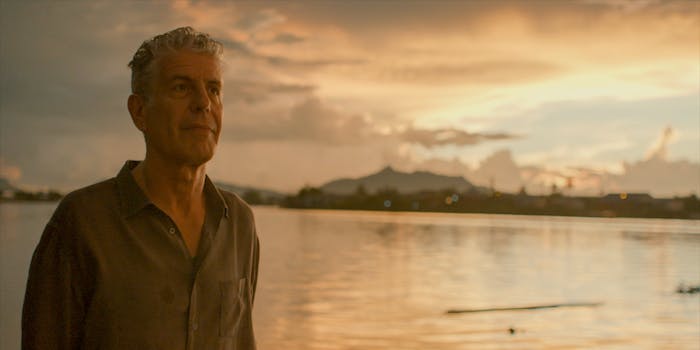 'This tells you all you need to know about the ethics of the people behind this project.'

Documentary filmmaker Morgan Neville and others who worked on Roadrunner: A Film About Anthony Bourdain, which opens in theaters on Friday, are being criticized for using artificial intelligence to recreate the late host and author’s voice.

The decision left many critics openly challenging the ethics of Neville’s film about the late Parts Unknown and No Reservations star, especially given that the information wasn’t in some initial reviews. Bourdain died by suicide in June 2018.

Speaking with GQ recently, Neville admitted to using artificial intelligence to recreate Bourdain’s voice by feeding 10 hours of it into a computer. “I checked, you know, with his widow and his literary executor, just to make sure people were cool with that. And they were like, ‘Tony would have been cool with that.’ I wasn’t putting words into his mouth. I was just trying to make them come alive,” he said.

However, Ottavia Busia, Bourdain’s ex-wife, tweeted for the first time in years to suggest this was not the case, stating, “I certainly was NOT the one who said Tony would have been cool with that.

The discovery is discussed, at some length: “There is a moment at the end of the film’s second act when the artist David Choe, a friend of Bourdain’s, is reading aloud an e-mail Bourdain had sent him: ‘Dude, this is a crazy thing to ask, but I’m curious’ Choe begins reading, and then the voice fades into Bourdain’s own: ‘. . . and my life is sort of shit now. You are successful, and I am successful, and I’m wondering: Are you happy?’ I asked Neville how on earth he’d found an audio recording of Bourdain reading his own e-mail.”

“Throughout the film, Neville and his team used stitched-together clips of Bourdain’s narration pulled from TV, radio, podcasts, and audiobooks. ‘But there were three quotes there I wanted his voice for that there were no recordings of,’ Neville explained. So he got in touch with a software company, gave it about a dozen hours of recordings, and, he said, ‘I created an A.I. model of his voice.’ In a world of computer simulations and deepfakes, a dead man’s voice speaking his own words of despair is hardly the most dystopian application of the technology. But the seamlessness of the effect is eerie. ‘If you watch the film, other than that line you mentioned, you probably don’t know what the other lines are that were spoken by the A.I., and you’re not going to know,’ Neville said. ‘We can have a documentary-ethics panel about it later.'”

Criticism came in hard and heavy, with many remarking on the ethics of how the filmmakers went about the tactic. Washington Post reporter Dave Weigel tweeted a highlighted interview excerpt and remarked, “Thanks, I hate it.”

Weigel also wrote, “It can be awkward when docs get an actor to ‘perform’ somebody’s quotes – the Hunter S. Thompson doc had Johnny Depp read his columns, for example. But this? This sucks!”

Journalist Lindsay Beyerstein questioned whether there should’ve been a viewer disclosure for the documentary, saying, “There’s no real problem with using AI in the place of a soundalike actor in a non-fiction film, as long as the creators are upfront about what they’re doing.”

Reviewer Sean Burns revealed he was unaware of the use of A.I. when he penned his review on the documentary. “I feel like this tells you all you need to know about the ethics of the people behind this project,” he said.

The Daily Dot has reached out to Morgan Neville.