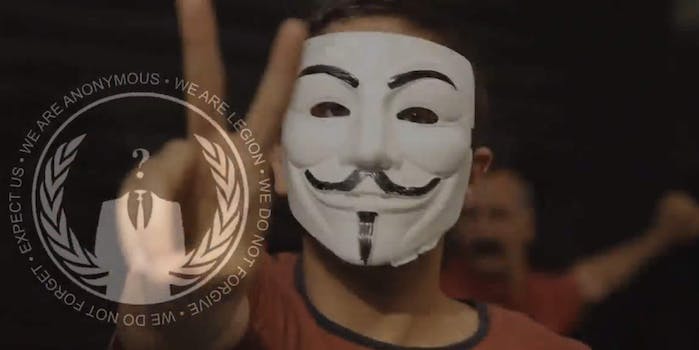 While Turkish citizens protest on the ground in Istanbul, Anonymous has begun hitting government websites.

Following intense protests in Istanbul, the hacktivist group Anonymous has thrown its hat into the ring.

The protests were directed at the preservation of Taksim Gezi Park, which is slated to be overwritten by a shopping mall, and, more generally, the perceived arrogance the ruling Justice and Development Party (AKP) has begun to show in claiming land for large infrastructure projects, such as a new bridge over the Bosporus.

The protests were met with excessive force by Turkish police and security services, with the widespread use of tear gas and water cannons, and the arrest of approximately 1,700 people.

As the demonstration entered its fourth day, Anon crashed the websites of Turkey’s president, Abdullah Gül, the AKP, the Istanbul Directorate of Security and the Istanbul Governor’s Office, all of which seem to have been restored—though, ironically, the security directorate’s site is still slow.

Other targets included the municipal government sites for the cities of Izmir and Mersin, as well as the Gebze Institute of Technology.

Anonymous also provided numbers for a free virtual private network (VPN) to skirt the alleged tightening of Internet access in the country during the protests. Turkish news sites are seeing attacks by pro-government hackers, according to Anonymous. While there has been no confirmation of that, the comments of the Turkish prime minister, Recep Tayyip Erdogan, have been disdainful of social media, as RT reports.

“There is now a menace which is called Twitter,” Erdogan said in an interview for Haberturk Sunday evening. “The best examples of lies can be found there. To me, social media is the worst menace to society.”