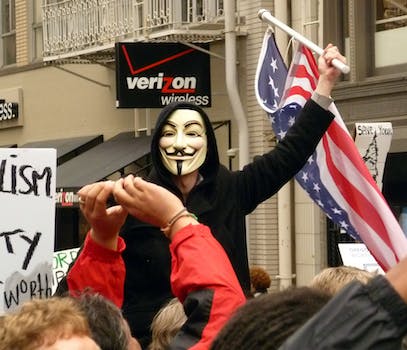 Anonymous threatens to take down State of the Union stream

Anonymous, displeased with President Obama's pending executive order on cybersecurity, is threatening to block all streaming versions of the State of the Union address.

If any live web stream of President Barack Obama’s State of the Union address happens to go dark Tuesday night, the hacker group Anonymous may be behind it.

The group has promised to “banish” Obama’s speech from the Internet because of an executive order he’s expected to sign Wednesday. Designed to address cybersecurity, the order may include provisions from the Cyber Intelligence Sharing and Protection Act (CISPA), the controversial bill that privacy advocates warn will give the government broad powers to snoop on your online presence.

CISPA passed the House in April 2012 but never made it to the Senate; its sponsors plan to reintroduce it for a second House vote Wednesday afternoon.

“Anonymous has reached a verdict of no confidence in this executive order and the plans to reintroduce the CISPA bill to Congress on the same day,” Anonymous wrote in a statement. “So as not to infringe upon the President’s free speech, subsequent broadcasts will be allowed to pass unhindered. This action is being taken to underline a fact that appears to be sorely unrecognized by the Obama Administration—that the Internet is a sovereign territory, and does not fall under the jurisdiction of any nation state.”

It is unclear what exactly will be included in Obama’s executive order, but according to a previously leaked draft, it would actually have provisions to mitigate some privacy advocates’ biggest concerns with CISPA. The White House has even threatened to veto that bill, specifically citing privacy concerns, if it ever passes both houses of Congress. He hasn’t reaffirmed that threat in recent months, though.

Anonymous has been building hype around its attach using the Twitter hashtag #opSOTU, which has been mentioned more than 2,000 times over the past 10 hours. While most of the tweets have just linked to news stories on the impending attack, a few others expressed doubt over its scope.

Obama’s State of the Union address will begin at 9pm ET.