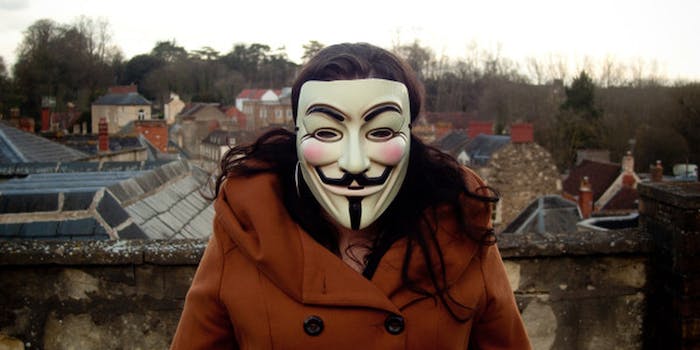 Hackers left taunting messages on the Alpha Unmanned Systems website over the weekend.

In the future, hackers will battle with governments for control over drone armies. For now, thankfully, they just deface websites and wreak coding havoc.

The website of the Spanish corporation was first defaced on Friday, May 25, and remained compromised until Monday, May 28 when the site went completely off-line.

One Anonymous subset calling themselves “Pirate Girlz,” who left a signature GIF on the site (and is taking pseudo-responsibility for the attack on Twitter), called Alpha Unmanned Systems “just another covert corporation funded by the CIA” in the defaced text. An image of Nyan Cat and a text-to-speech Anonymous style video were also utilized in the defacement.

The hackers claimed the company’s “manual remote control of the UAVs” as well as the “video transmission” for the aerial vehicles both lacked “proper encryption,”  implying the hackers could access the drones through the website. The hackers also said they changed the website’s “admin panel” because it  “was not safe,” wiped files from the server, and taunted the company with claims they “may or may not” have installed a trojan virus.

The group finished with a threat to steal the company’s drones sometime “soon.”

An unnamed Alpha Unmanned Systems representative told Spanish news outlet ABC.es this morning the attack “does not threaten the safety of the aircraft.”

The motive behind the weekend cyber defacement and attack echoed various Anonymous agenda, such as the freeing of Bradley Manning and the end to the controversial European Union-funded urban cyber surveillance project known as INDECT.

The INDECT project website describes its efforts as a “research project, allowing involved European scientists to develop new, advanced and innovative algorithms and methods aiming at combating terrorism and other criminal activities.”

But in a video which the group embedded on the hacked site, an Anonymous spokesman claims the project, which The Telegraph has called “Orwellian,” opens the door for insidious privacy violations.

“The application of INDECT aims to analyze conspicuous behavior to prevent crimes, in virtual life as well as in real life, before they actually happen” the spokesman says in the video. “Not only does this sound crazy, it is cutting deeply into our basic right to privacy, because those cameras will be able to replicate scanned personal biometrical features with existing digital files about persons in databases such as social networks.”

It’s not clear what direct connection Alpha Unmanned Systems has with INDECT. The hackers also called for the closing down of Guantanamo Bay, assistance to the people of Syria, and better treatment of Occupy Wall Street protesters.