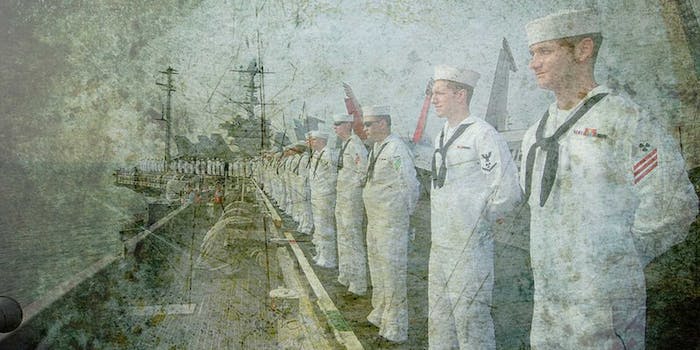 But it's mostly photos of sailors smiing and goofing around with wrist ties.

OpGTMO, Anonymous’s campaign to get the world riled up about the U.S. holding suspected terrorists at Guantanamo Bay without hope of a trial, has launched.

But its big leak? A couple photos of guards, smiling, taken from a Facebook page. Admittedly, a few are playing with wrist ties, but this is hardly the incriminating behavior OpGTMO set out to expose to the world.

That’s not to say the operation isn’t a success. Shortly after it launched Friday at noon eastern, the hashtag #GTMO17 became the top trending topic worldwide. But AnonyOps, which also promoted a huge, successful list of #GTMO17 tweets to copy and paste, also made a big promise.

Those photos, it turns out, were from the since-deleted Facebook group Naval Station Guantanamo Bay, Cuba. They show a handful of smiling sailors—Gitmo is Navy-run—who have a clear running joke of taking pictures of each other as they “arrest” each other with plastic ties. Presumably, they’re the same type used on prisoners.

In another photo, sailors pose with Brian Billick, the former football coach who in 2001 led the Baltimore Ravens to a Super Bowl victory.

In response to one twitterer who wondered whether the photos exposed service members’ identities, the official AnonyOps Twitter account responded “If so, they’ve done this. They posted them to Facebook.”

As of this writing, #OpGTMO is still Twitter’s top topic worldwide and has been tweeted by nearly a thousand users. The photos of the sailors have been tweeted 52 times