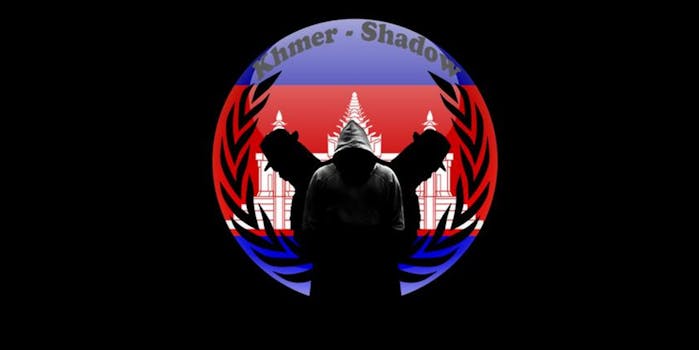 The Anonymous operation to bring freedom to Cambodia

Remember Cambodia? That's what Anonymous wants you to do right now.

Remember Cambodia? That’s what Anonymous wants you to do right now, as it ramps up efforts under the flag of #OpCambodiaFreedom. I spoke via private webdocs to the Twitter account leading awareness of the operation to get a sense of what’s going on in this time of crisis in Cambodia.

#OpCambodiaFreedom #electionsKH #Cambodia do have Dictator like North Korea too, why everyone ignore Cambodia? https://t.co/Q3yz50tkKX

“The unrest [is] caused by the government and the way it manage[s] the country,” AnonymousCambodia told me. “They rule like the old day when they are head of the Communist-Cambodian state. The people rise up now because they have seen enough and the impact of government ruling is too much to stay silent.”

Officially a constitutional monarchy, Cambodia is in actuality ruled by Prime Minister Hun Sen, leader of a successful 1997 coup, who has sworn to remain in power until he is 74, no matter what the election results say. He’s got a couple of decades to go. Despite a growing economy, an estimated one third of Cambodian children suffer from malnutrition, and only 25 percent of the population has electricity.

Hun’s troops have clashed with anti-government protesters since the lead-up to the 2013 elections, and recently the demonstrations and concordant government retaliations have escalated. Cambodia’s clothing industry—tied to Levis, H&M, and Gap, among others—is one of its most lucrative, in no small part because of low wages, and workers have taken to the streets in the tens of thousands to protest and demand a doubling of the minimum wage to $160 per month. The government had offered a small increase instead. In return, on Jan. 3 Hun’s army fired on the demonstrators using live ammunition, sending many to hospital and killing at least four protesters.

As a spokesman for Solidarity Center told the Phnom Penh Post: “In that economic zone, things have been getting out of hand. Whatever the case, this is complete disproportionate use of force, illegal and completely outrageous on behalf of the government.”

The recent events led Anonymous to speak out.

The next day #OpCambodiaFreedom peaked on Twitter. The tweets included retweets of journalists onsite, graphic images of the protesters and police, and links to growing media coverage. More and more groups and individuals rallied around the hashtag and began to echo Anonymous Cambodia‘s call for an investigation by the Hague. A new Change.org petition sprang up asking for U.N. intervention and now boasts almost 20,000 signatures.

They are still trying to figure out how to evict this blind old woman who cannot walk from Freedom Park. pic.twitter.com/a3NufEiJ0K

In response to the demonstrations, the government banned public assembly and hauled in opposition leaders for questioning, as well as imprisoning many of the protesters. Authorities locked down the area in which the clashes had occurred and forcibly evicted the remaining protesters and residents. Government reaction continues to draw the attention of international journalists.

I just tried to chat up a daughter of the Cambodian power cabal. If I “disappear” it would have been worth it – wow

The Anonymous operation had actually been active, if isolated, for months. It took headlines on the BBC to draw world attention to its actions.

Back in October participants had re-uploaded the operation announcement video to Vimeo.

The transcript reads, in part:

Government of the once great Kingdom of Cambodia, you have decided to disregard our requests to assist the people of this country, and have persisted in running a one-way system … to benefit yourselves.

You have created a system which ensures the poor remain poor, and the wealthy remain wealthy. The system has failed us.

To the Kingdom of Cambodia government, you have made an enemy of Anonymous, you have angered us considerably and we now pose a significant threat to you. Your worst enemy is now your own people.

That video’s views peaked on Jan. 3, as news of the bloody clashes spread across Europe and Asia. On Jan. 5, the video and transcript were uploaded to the influential international Anonymous site Cyberguerrilla, driving more awareness across Anonymous circles. An American-accented version of the Brit-inflected video was created and uploaded Jan. 1, and it already boasts more views than the original.

A flamboyant hack of a government website and unforgettable defacement quickly followed.

The satirical image was tailor-made for social media, and it had a significant role in the rise of the #OpCambodiaFreedom hashtag.

Anonymous Cambodia also boasted that it had temporarily sidelined the website of the government-controlled national television company and published a list of websites to be targeted. At the time of publishing all the sites listed are offline except one, which has been emptied of everything but the words “go away.” Several other government sites were also defaced, while a government railway site currently features an oversized iframe embedding the contents of the Anonymous Cambodia Tumblr (though there is a flaw in the code preventing the images from displaying).

Anonymous continues to urge supporters to tweet and fax buyers for major garment retailers and designers, hoping to convince them to pressure the government to comply with worker demands.

“We need the world to bring dictator Hun Sen to ICC Court. This is the only wish that Cambodian people want to accomplish now,” Anonymous Cambodia told me. “And ultimately the Cambodian people deserve freedom.”