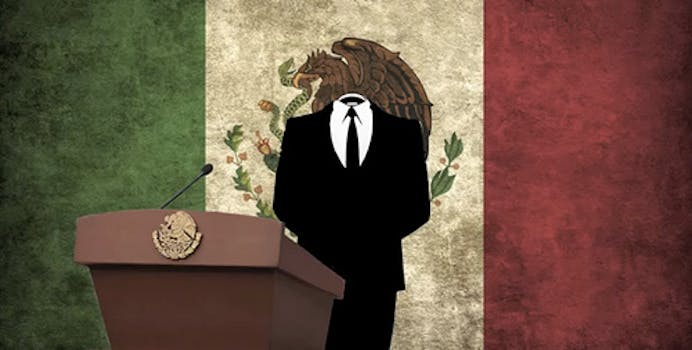 Security experts and hackers agree, if Anonymous goes through with its planned #OpCartel attack on a violent Mexican drug cartel on Saturday, it would be an unprecedented move by the group.

When hacker Gregory Evans was serving a 24-month sentence in West Coast prison camps, he befriended men with ties to Mexican drug traffickers. Evans helped them place free phone calls and even spent 11 months of his sentence in solitary confinement after he was caught hacking the prison phone system.

Eight years after his release, Evans is a law-abiding cybersecurity consultant who helps companies avoid being attacked by hackers like the one he once was. Like a lot of former cons-gone-good, Evans maintains contacts on both sides of the law, so he wasn’t entirely surprised when his phone rang Tuesday night.

“What the hell is an Anonymous?” asked the caller, who Evans says has ties to Mexico’s violent drug cartels.

“Right now the cartels see these Anonymous guys as a joke,” Evans told the Daily Dot, adding that he declined his former acquaintance’s offer to discuss the group of hackers at length. “I still say it’s all a bunch of B.S., and tomorrow will tell the story.”

If Anonymous goes through with its planned #OpCartel attack on a violent Mexican drug cartel on Saturday, it would be an unprecedented move by the group, according to hackers, security experts, and long-time Anonymous observers.

“That would be very out of character,” said Sean Greene, a digital forensics expert with Arizona-based Evidence Solutions Inc., who has been studying the  group of hackers and activists for three years. “They have never really been the kind of activist group to expose people like that. Wiki[leaks] exposes people, but that hasn’t been Anonymous’ thing”

Experts and observers are split over which side has the upper hand. Evans is skeptical of Anonymous’ claims that it will be able to link public officials to the cartels, and if any names are released, he believes they will simply be names of people who are officials in the areas of Mexico where Los Zetas is most predominant.

“If they release anything tomorrow, it’s stuff you or I could just as easily have found on Google. These guys really just started talking about this a week ago,” he said. “Are you telling me that in a week they have figured out what the DEA, the FBI, the CIA, and Interpol haven’t? The cartels don’t send emails or leave voicemails to the officials they have on the payroll. You need people on the ground; you need undercover agents; you need photos; you need all sorts of information you simply can’t get online to prove someone is working with the cartels.”

Greene, on the other hand, did not doubt that Anonymous had the capability to carry out its promised attack, but said with very few exceptions the group prefers denial of service attacks. No one, Greene said, will be able to tell with 100 percent certainty what Anonymous is and is not capable of doing until tomorrow.

“We only know part of the story,” Greene said. “With Anonymous, unless you spend pretty much every moment in the chat rooms, monitoring them, you never really know for sure what is going to happen — and if it is going to happen — until it is happening. If Anonymous wanted to, they could probably take down the phone network surrounding these cartels in Mexico.”

Earlier this week, reports emerged that the operation had been canceled over safety concerns. Los Zetas has claimed responsibility for the murders of three people in September who posted information about the cartel on social networks. Los Zetas is also believed to have recruited hackers to help it identify enemies online. By Wednesday, however, most observers and people claiming to be Anonymous members said #OpCartel was moving forward.

Greene said the sophisticated portals Anonymous uses makes it almost impossible for an individual participant to be tracked down.

It seems unlikely that Los Zetas would go through the trouble. Of the three people killed in September, only one has been identified. Therefore, it remains unclear if the other two actually posted messages on social networks or if Los Zetas killed a random man and a woman to send a warning to people who were posting about the cartel.

“Guy Fawkes’ Masks aren’t bulletproof. Even if they can’t find you.they’ll make an example as a warning out of somebody #opcartel #jussayin,” @Anonmauz tweeted earlier this week.

Or, as Evans noted, money may trump all.

“The cartels have contacts all over the world,” he said. “If they figure out who is doing this—and I believe they are sophisticated enough to do so—and they put out a $1 million hit on someone’s head, that person will be found.”