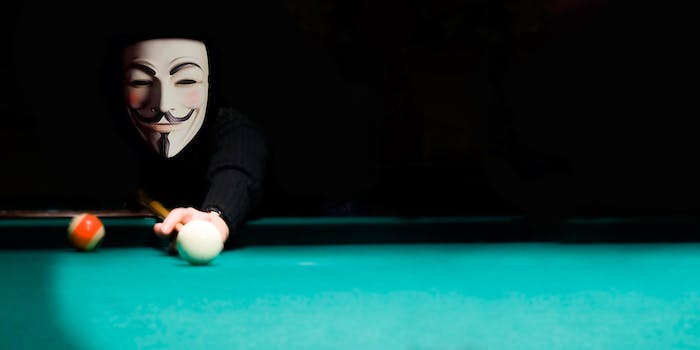 An owner of the school denies the abuse ever took place.

The hacktivist collective Anonymous has launched a campaign against a Utah boarding school for troubled teenagers after testimonies of alleged abuse surfaced four weeks ago online.

The complaints against Logan River Academy in Logan, Utah, read almost as if they’re from Guantanamo Bay inmates. Former students claim they were submitted to solitary confinement, beatings, and bullying.

Logan River co-owner Jeff Smith said that in more than 13 years of running the academy, there have been no issues as described in these testimonials.

“The allegations are unfounded,” Smith told the Daily Dot. “It’s some people who have an agenda and are trying to damage us. It’s taken on a life of its own. There’s no basis for the allegations out there.”

Smith also added that the academy is licensed and has regular on-site reviews. The academy’s 60 students also have access to these reviewers and can submit grievances that way. Smith could not provide any information on how many grievances have been filed to date.

One of the first testimonies to surface was from Michael Carter, 28, who spent 13 months at the academy. Carter posted a YouTube video on Oct. 13, claiming he was subjected to incessant indoctrination by members of the Church of the Latter Day Saints and punished for saying anything negative about the facility.

Smith would not comment on whether Carter was ever a student at the school.

Logan River Academy was founded in August 2000 and states on its website that it is one “of the premier residential treatment centers and therapeutic boarding schools” for teenagers suffering from substance abuse, depression, and behavioral issues. The academy accepts boys and girls from ages 12 to 18 at a cost of $8,900 a month. The academy has around-the-clock supervision and employs therapists, physicians, nurses, and teachers.

Much of what Carter discussed in his YouTube video has been echoed by other former academy members on shutdownloganriver.com.

Anonymous has used these testimonies to create a Vimeo video and lengthy Pastebin document to spearhead operation #ShutLoganRiver.

Anonymous has asked people to contact the academy and local authorities to “demand investigation into possible abuse.” A Change.org petition against the school has collected 808 digital signatures as of 4:20pm ET.

To further raise awareness regarding the academy, @youranonnews, one of the largest Twitter accounts for the Anonymous group, has called for a “tweetstorm”—flooding a specific hashtag with tweets until it trends globally—at 4pm ET Monday.

A search through the archives of HJNews.com, a media organization in Logan, revealed no news reports of abuse at the school over the past decade.

The academy has an “A+” rating from the Better Business Bureau, with no complaints in the past three years.

Smith believes that these allegations have been drummed up by the sibling of a former academy member who was unhappy his parents had sent his brother there.

“They used social media and the Internet to garner support for their cause, which initially was for the brother to get home,” Smith said. “It’s just morphed into this much bigger thing now. I think it has something to do with how connected people are. There are people who can rally around anything.”

Logan River Academy is a residential treatment center that has been in operation for over thirteen years and has served over 1100 students suffering from a variety of serious emotional, behavioral, and substance abuse problems and their families. Logan River Academy is, and has always been, fully licensed and in strict compliance with all regulatory and accreditation requirements. All students receive professional care, treatment, and education from only licensed clinicians and accredited teachers. All programs at Logan River Academy were developed and are carried out in strict accord with all applicable professional, ethical, educational, and medical standards. Students are not isolated, secluded, abused, or mistreated in any way. To the contrary, students facing an acute and temporary crisis receive increased supervision and support during the crisis to protect them and others and to best provide for their well–being and progress. Recently it has come to the attention of Logan River Academy that various individuals have posted false, inaccurate and misleading information about the Academy online and on social media. Many of these statements appear to have been made by former students dissatisfied with the results of the treatment. While the vast majority of students successfully complete the treatment program and return to their families, homes and communities greatly benefitted by their time at Logan River Academy, no program can guarantee success and satisfaction in all cases. Nevertheless, statements alleging illegal, unethical, inappropriate, and unsafe conduct are false. Logan River Academy is committed to maintaining a safe, nurturing, and effective treatment environment of great benefit to our students and their families.