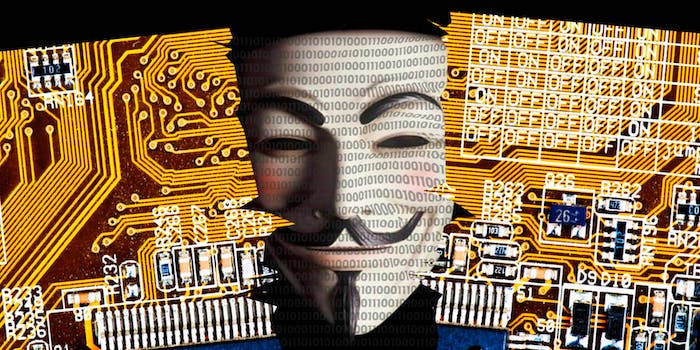 The hacktivist collective is angry over wargames that depicted the group as terrositic villains.

Hacktivist group Anonymous claims it has “compromised a FEMA server,” obtaining the title, name, agency, and address of hundreds of the Federal Emergency Management Agency’s contacts across the United States.

The move appears to be in response to a FEMA “wargame” that depicted Anonymous-style hackers as terroristic villains.

The data also includes summaries of FEMA exercises, such as “Communications at Emergency Incident Sites: Assigning Cellular Telephones to Specific Positions or Functions.”

Anonymous provided the Daily Dot with a copy of the data earlier today, a few hours before it released everything online. The group redacted logins, passwords, and social security numbers, saying its “intent is not to harm, [but] merely to issue a firm warning.” FEMA did not respond to the Daily Dot’s request to confirm the breach.

According to Anonymous, this data is just the first step.

“There is a significant amount of data that still needs to be analyzed pending potential release,” a member told the Daily Dot in an email.

The wargame, called the National Level Exercise (NLE) 2012,  was “part of a series of congressionally-mandated preparedness exercises designed to educate and prepare participants for potential catastrophic events,” according to the Department of Homeland Security.

FEMA, under the Department of Homeland Security, conducts an NLE each year.

Anonymous members are angry over the central villain in the NLE scenario, wherein business and financial interests are attacked by a cyberterrorist group called “The Void,” which was clearly meant as a stand-in for Anonymous.

This exercise had a broadcast aspect, with a fake newscaster (Jeanne Meserve, who used to be a real newscaster, and covered Homeland Security for CNN) making announcements and summing up aspects of the imaginary attack. The script for the three broadcast elements Anonymous believes, tried “to implicitly link financial gain and fraud to activist hackers.”

Anonymous also objected to the portrayal of “The Void” (and thereby Anonymous) as anti-American.

“This leak is dedicated to our fallen comrades, allies and those who fight for the same causes as us” said Anonymous in their accompanying statement. “For Jeremy Hammond, for Weev, for Edward Snowden, for everyone who has risked and continues to risk their freedom for their belief in a world free from constant, invasive surveillance.”