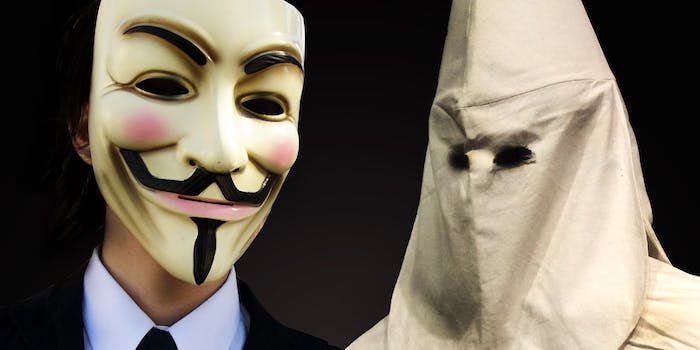 Anonymous is doxing KKK members (and I’m OK with it)

#OpKKK and exposure of Missouri KKK members raise an important question: If it's for a good cause, is doxing justified?

Can doxing be used for good? It seems like an odd question in a year when the prominent outing of personal details about women in gaming has become major news; of course we should oppose doxing! No one should be threatened with the release of personally identifying information! But that changes when the target of said outing is a booster of a major hate group: the KKK, an organization that has thrived in no small part because of its secretiveness. It’s easy to make racialized threats from the comfort of a white hood, but the story changes when that hood comes off.

After tangling with Anonymous over a controversial and racist flier distributed in and around St. Louis County in advance of anticipated protests surrounding a possible grand jury indictment over the Michael Brown shooting, the KKK got thoroughly spanked on Twitter when Anonymous seized control of the national account operated by the organization:

But Anonymous didn’t stop there. The nebulous organization also released personally identifying information, including addresses and phone numbers, of prominent members of the Traditionalist American Knights of the Ku Klux Klan, based in Missouri. The “cyberwarfare” threatened by Anonymous rapidly unfolded in real time. Coordinated attacks targeted content uploaded by the Traditionalist American Knights and its members, while various KKK supporters in turn threatened Anonymous.

The situation raises a legitimate and complicated ethical question about whether doxing might, on occasion, have its place. The idea might seem repugnant for some; arguing that what’s good for the goose is good for the gander isn’t necessarily a good appeal to logic if the goal is to be above the tactics of the other side. However, opposing hate groups sometimes requires meeting them on their own terms, and in this case, Anonymous’s decision to expose KKK members in the most dramatic of public fashion may have been an act of public service.

The saga started when the Traditionalist American Knights began distributing fliers threatening to use “lethal force” against Ferguson protesters in the event of another round of protests—which seems likely, as there are considerable doubts about whether the grand jury will indict Officer Darren Wilson in the death of Michael Brown. Anonymous warned the KKK that their interference with peaceful protest and threats of lethal force would not be tolerated in a video posted on Nov. 14 and since removed for violating YouTube’s terms of service, introducing viewers to #OpKKK.

Over the weekend, Anonymous stormed not just @KluKluxKlanUSA but also @YourKKKCentral, preparing both for #HoodsOff—exposing active members of the KKK to their own communities.

This is a situation so dramatically different from Gamergate that the two might as well be on different planets. One involves the exposure of personally identifying information that led to threats so severe that women were forced to leave their homes and seek security for public events. In this case, racist members of Missouri communities are being unmasked, and in some cases, those masks may have been pretty slippery in the first place, making it probable that at least some members of their community were aware of their KKK affiliations. Unmasking KKK members is not necessarily a bad thing, in that context; calling it doxing, in fact, would be a bit of a stretch, as simply revealing that someone belongs to a private organization is hardly equivalent to offering up personal contact information.

However, #HoodsOff went a step further, providing home addresses, phone numbers, and information about the families of KKK members. This is where the group may have crossed an defensible ethical divide and fallen into a crevasse. While exposing people as members of a racist hate group is indeed an act of service to the public, providing information that could make them targets of aggression is not.

Let’s look back at the “unmasking” of Michael Brutsch, a.k.a. Violentacrez, a notorious Reddit mod who was profiled by Adrian Chen on Gawker in 2012.

Many cheered the exposé, but others didn’t view it so favorably. Redditors argued that it had crossed the line from solid investigative journalism to something more sordid:

But here’s the thing. You are not a judge, and you are not a jury. Neither am I. If you had removed all references to Violentacrez’s real name and location, this could have been a very powerful article encouraging Reddit to clamp down and add more rules about what content is acceptable and what content isn’t.

Exposing personally identifying information about Violentcrez, some felt, was going a step too far. Even though his behavior was most definitely abhorrent, an open discussion about his family, the location of his home, and other personal details put him at personal risk. Jane Litte at Dear Author also expressed her unease with the article:

But what the criticisms of the Violentacrez expose—and the potential backlash against #HoodsOff—miss is that in both cases the doxing was punching up, not down, or across. Chen’s article in particular never advocated action against Brutsch; it was a profile of the real-life identity of an Internet troll.

Anonymous is out for blood. But even this is justifiable.

These instances of doxing are about exposing the people behind hateful behavior for who they really are. If such exposés created legitimate physical risks for the individuals involved, supporting their doxing would be unconscionable, but that seems highly unlikely. Like other people in positions of privilege, Violentacrez, like these KKK members, are unlikely to face abusive fallout from their public exposure, though the Internet may criticize them and be up in arms about their involvement in hateful activities.

Conversely, prominent feminists targeted by doxing attempts are the victims of punching down from people and organizations attempting to silence them.

To be racist in the United States is, on many levels, still a perfectly safe thing to be. To be a woman criticizing the misogynist content of games, however, isn’t. And until that changes, yes, we must admit that there are times when doxing is in fact justified for the greater social good, and when forcing darkness into light burns away evil.