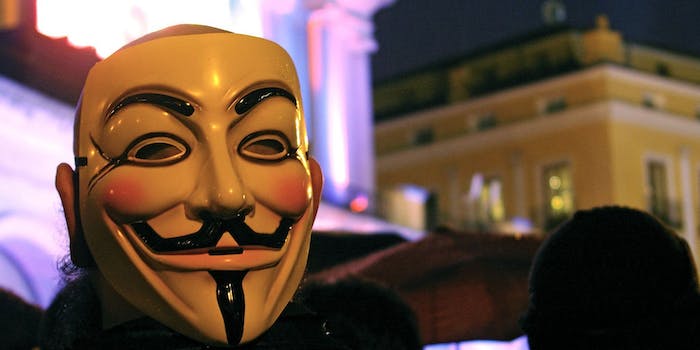 Warning: This article contains graphic images that may be disturbing to some readers.

Members of loosely organized hacktivist collective Anonymous are rallying around a five-year old Texas boy who was allegedly subjected to a shocking case of child abuse by his father and stepmother.

Earlier this week, a document entitled #OpBabyBoy was posted to the document-sharing site Pastebin. The document, with a title that echoed that other of Anonymous initiatives, aimed to solicit donations for Jordan Bleimeyer. It reads, in part:

The goal of #OpBabyBoy is to bring some joy to this child’s life. A bit of happiness. Most important, to show him people care about him. That he matters. His father & stepmother failed to do this. We won’t.

We’re asking that each of you help bring this frail, abused, frightened child a bit of happiness. No doubt we wish we could do this for every child in this situation. We can’t save the world, but we can make it better for a child, one child at a time.

Bleimeyer gained national attention earlier this week after law enforcement officials were called to the Spring, Texas, home of his father and stepmother because of a fistfight taking place on the home’s front lawn between Bleimeyer’s 16-year old stepbrother and their father, 23-year-old Bradley Bleimeyer. The teen allegedly began the fight after discovering that Bradley and his wife Tammi Bleimeyer, 33, were keeping an extremely malnourished Jordan locked in a small room underneath the staircase. By the time police arrived, Bradley and Tammi had fled the scene with the child. Using cellphone location data, police tracked them to a nearby hotel, where the couple was arrested and charged with felony child endangerment.

Harris County Constable’s Office Assistant Chief Mark Herman told KHOU that, in his nearly three decades of law enforcement, he had never seen such an egregious case of child abuse. “He was severely undernourished, bone sticking out, bumps, bruises,” Herman said. ?His skin was coming off on his back. It’s a horrific, horrific situation.”

Here are some pictures of what Jordan looked like after he was found. (Warning: Graphic): 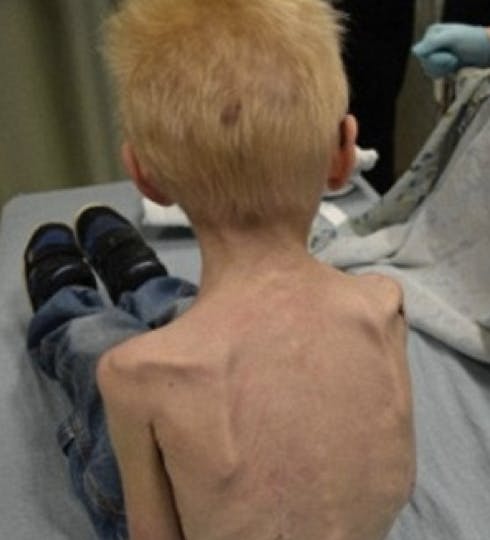 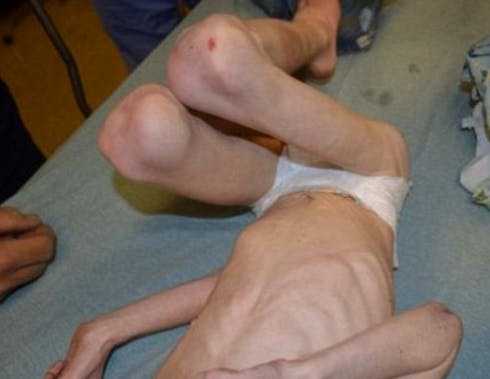 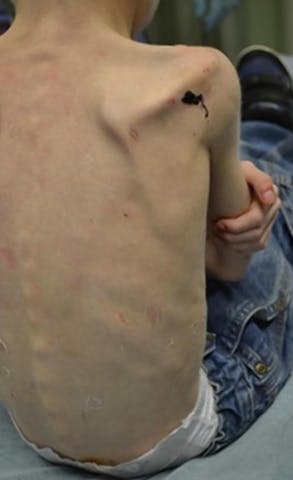 Jordan Bleimeyer, who weighed only 29 pounds at the time he was rescued, has been sent to a local hospital. His story quickly attracted the attention of the national news media.

He had a little mattress, he was kept locked up, he was given drugs to make him sleep when people would come to their home so he wouldn’t make any noise. He was locked up under that stairwell. In a separate room. His daddy hitting him. He can’t cry when the other children took his food. He was fed a piece of bread and a cup of water or milk a day. When he gets to eat food, he looks around at people because he thinks they’re going to take his food.

A Facebook group was created to solicit public donations of toys, clothing, and other gifts for Jordan. The boy’s biological mother, who said she hadn’t seen her son in two years, is now seeking custody.

It was at this point that Anonymous got involved.

As word of the campaign has spread across Twitter with the hashtags #OpBabyBoy and #ToysForJordan, it has triggered a strong emotional response from many Anonymous members and people who simply sympathize with Jordan’s plight:

Hearing from people that have sent gifts for #OpBabyBoy remember to take pics! These toys will help Jordan & other children #AnonCorpWatch

In #OpBabyBoy news I am so proud at how this spread and the love that has been shown!These will help more than just one child! Thank you all

@ComediAnon howdy!!! I sent out the #OpBabyBoy yesterday and I have some awesome folks sending stuff. Kills me.

The document posted on Pastebin warned against sending food because, due to Jordan extreme malnourishment, his doctors are likely putting him on a very specific diet and he might not be able to eat some of the food items people might otherwise send. Instead, the author asked interested donors to mail things like toys, coloring book, and kids’ DVDs.

?Please join us in letting this child know he matters, he has value, & that there ARE good people in the world,” the document urges. ?Even a simple, small greeting card will mean so much!”

The collective of hackers and online activists have a long history of sticking up for underdogs, especially young people, who they feel have been mistreated by those in positions of authority. The most famous incident involved a campaign aimed at exposing a town-wide coverup of the rape of a 16-year old girl by two high school football players in Steubenville, Ohio. The effort resulted in the rapists being sentenced to a year in jail; however, one of the Anonymous activists, Deric Lostutter, was arrested for his part in the action. Lostutter tells the Daily Dot that he currently faces up to 25 years prison. The production company of actor Brad Pitt recently optioned Lostutter’s story to be made into a feature film.

Correction: An earlier version of this report indicated that an “Anoymous activist” had been “sentenced” to 10 years in prision. That activist, Deric Lostutter, is, instead, currently awaiting idictment. In a private Twitter conversation, Lostutter told the Daily Dot that, “Through talks with [Assisstant U.S. Attorney Deborah Solove] they could serve me with as much as 25 years.” We have reflected that information in the copy above.