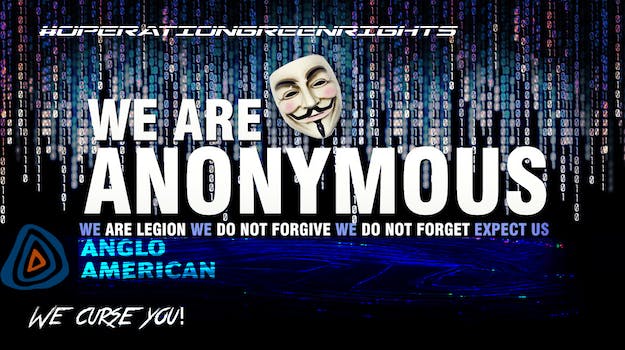 Anonymous associates have hit Anglo American, the world’s largest miner of platinum and other precious metals.

Anonymous associates have hit Anglo American, the world’s largest miner of platinum and other precious metals. The hack, which stole a large cache of company documents and data, is part of Operation Green Rights.

The data dump included details on over 500 investors and shareholders, as well as company emails. Anglo American is the world’s largest producer of platinum and also handles diamonds, copper and other natural resources. Headquartered in London, it has subsidiaries across the globe.

The company was also accused of beating and shooting activists in South Africa protesting mining on tribal lands and displacing people during mining operations, as well as polluting water sources in South America.

“Anglo American, you destroy nature and pursue and kill indigenous people,” said OpGreenRights’ statement on the hack, “In the name of tribal leaders, whom you have offended, and the natives you have deported, in the name of the miners killed during a strike against your dirty company, in the name of nature that you consider as a source of gain: We curse you!”

OpGreenRights is a series of hacks aimed at natural resource extraction companies and others whose activities have a pronounced and deleterious effects on both the natural world and food producing lands. Targets include tar sand developers and oil companies, such as Conoco, Exxon, Candian Oil Sands, as well as seed and chemical company, Monsanto.

An Occupy member who supports Anonymous gave the Daily Dot a glimpse into how these hacks are done and where their value lies.

“A lot of these hacks tend to be opportunity hacks,” the source said. “I don’t believe Anglo American was specifically a target. There is a big list of companies for OpGreenRights. I would assume they scan names from it and check for vulnerabilities until they hit.”

The fact that they are “opportunity hacks” is an interesting point. The skill level and resources of a collective like Anonymous vary wildly and the members rely to a large degree on collective efforts, rather than a concerted effort at code-breaking that you might see in a state-sponsored or a money-driven hack run by a centrally-controlled criminal group.

“This doesn’t mean it wasn’t a legit hack or that some good treasure wasn’t looted,” the source clarified. “The emails are what will make this a poor hack or an amazing hack. Hacks like this are meant to embarrass the companies and hope (is that) the emails contain corruption.”