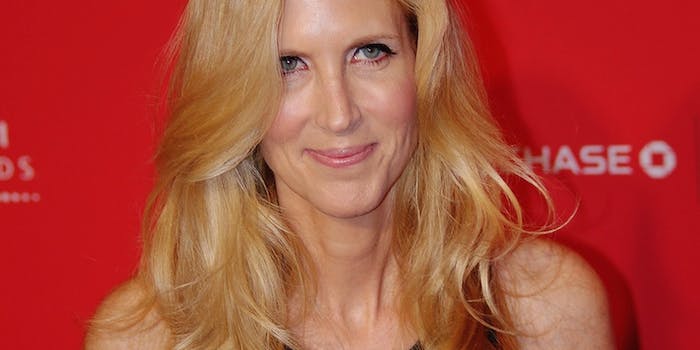 Ann Coulter's pro-gun tweet in the wake of Friday's elementary school shooting in Connecticut is just the most recent in a string of controversial tweets that have kept her name in the news (and at the top of Twitter's trending topics).

While the U.S. continues to grapple with the tragedy at a Connecticut elementary school where 27 people, including 20 children, were gunned down Friday, conservative author and pundit Ann Coulter has taken the opportunity to stir up controversy on Twitter once again.

Before an appearance on Sean Hannity’s radio program, Coulter tweeted the following message to her 306,000 followers:

The message was retweeted more than 170 times, and helped make Coulter one of the only national trending topics on Twitter not directly related to details from the shooting at Sandy Hook Elementary School. And as Twitter user Stanley Blackmon accurately pointed out, almost all of the tweets about Coulter criticized her position and called her out.

“I’m becoming more and more convinced that Ann Coulter is in the running for Antichrist,” @jaraevstheworld tweeted.

“So we can agree Ann Coulter’s won at trolling. Let’s give her the trophy or baby heart or whatever so she’ll just stop,” @thecharleswebb added.

Coulter has been an outspoken supporter of armed citizens and “wrote in 2007 defending the laws after the deadly mass shooting at Virginia Tech, the country’s worst school shooting,” thewrap reported. That article, which she linked to in a tweet this afternoon, has since been taken down.

Over the past year, Coulter has become a master Twitter troll. In just the last two months, her controversial tweets have helped her collect 76,000 followers. The following list is just some of the holidays, political scandals, and issues she has criticized on Twitter.

Nov. 4, 2011: Last November, businessman Herman Cain became the Republican frontrunner for president after a slew of debates swung in his favor. But almost as soon as Cain became America’s sweetheart, a handful of women accused the former Godfather Pizza chief executive of sexual assault and inappropriate behavior. Coulter weighed on the controversy with the following message, which was retweeted 777 times:

Oct. 16, 2012: For more than 20 years, National Coming Out Day has been a time for people from around the world to promote public awareness about lesbian, gay, bisexual, and transgender rights. For Coulter, this year’s event was a time for her to do the exact opposite.

The tweet was greeted angrily by gay rights supporters on Twitter, who called Coulter “evil” and wondered what type of drug cocktail she was on.

Oct. 23, 2012: With two weeks left until the election, Coulter stirred the political pot when after the second presidential debate between President Barack Obama and Mitt Romney, Coulter tweeted the following message:

“I highly approve of Romney’s decision to be kind and gentle to the retard.”

The tweet sent off shockwaves around Twitter, where it has been retweeted more than 2,800 times, favorited 1,150 times, and mentioned in more than 25,000 messages over the past 15 hours.

One of the people she insulted with her tweet was John Franklin Stephens, a 30-year-old blogger and Special Olympian with Down syndrome from Fairfax, Va. In an open letter to Coulter posted on the Special Olympics blog, Stephens questions Coulter’s remark. Unlike a majority of those upset, however, he did not address her with hateful vocabulary or death threats.

“Come on Ms. Coulter, you aren’t dumb and you aren’t shallow. So why are you continually using a word like the R-word as an insult?” Stephens asked.

Nov. 22, 2012: Of all the historical tragedies to make fun of, the Holocaust, in which 6 million Jews were killed, is considered one of the worst. That fact was lost on Coulter on eve of Thanksgiving when she tweeted the following message:

“HAPPY HOLOCAUST ON YOUR PLATE DAY AND TO ALL A GOOD NIGHT!”

The message was retweeted 92 times.

Jordan Valinsky contributed to this report.