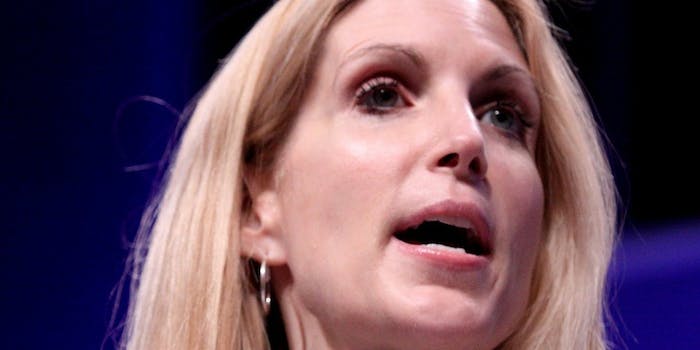 “I highly approve of Romney's decision to be kind and gentle to the retard," Coulter tweeted about Monday night's presidential debate.

With two weeks left until the election, Republicans and Democrats cannot agree on anything when it comes to the economy, foreign affairs, and health care.

But one topic they have met eye to eye on recently is their disdain for political commentator Ann Coulter.

During Monday night’s presidential debate between President Barack Obama and Mitt Romney, Coulter tweeted the following message to her 263,000 followers:

“I highly approve of Romney’s decision to be kind and gentle to the retard.”

The tweet sent off shockwaves around Twitter, where it has been retweeted more than 2,800 times, favorited 1,150 times, and mentioned in more than 25,000 messages over the past 15 hours.

“Honestly, this is the most disgraceful thing I’ve ever read on the Internet or anywhere,” Thomas Harp (@thomasharp) tweeted. “Shame on you.”

Other Twitter users were far less kind to the 50-year-old pundit. Some called her names while others insisted she be punched. Comedian Patton Oswalt, on the other hand, tried to explain why Coulter used that word.

“Ann Coulter died of prostate cancer in 2002. Her Twitter account’s a sentient emu skeleton with a swatch of eyelid skin stretched over it,” Oswalt tweeted. “If Ann Coulter’s calling the President a ‘retard’ it means he won/is going to win. She’s our un-pettable Punxsutawney Phil.”

On Reddit users expressed a similar outrage to the tweet while ruminating on how long it might take Sarah Palin to lash out against Coulter. Palin, who has a son with Down syndrome, has fired back at conservative radio host Rush Limbaugh and former White House Chief of Staff Rahm Emanuel for using “retard” as an insult.

Coulter has been a political troll of sorts over the years, often being booed off college campuses for criticizing gay marriage, liberals, and the media. While her most recent tweet was offensive, the best thing to do is ignore it, tweeted Will Stegemann (@betheboy).

“The worst thing you can do is pay attention to Ann Coulter,” Stegemann said. “No matter what she says, it’s only relevant if you pay attention.”