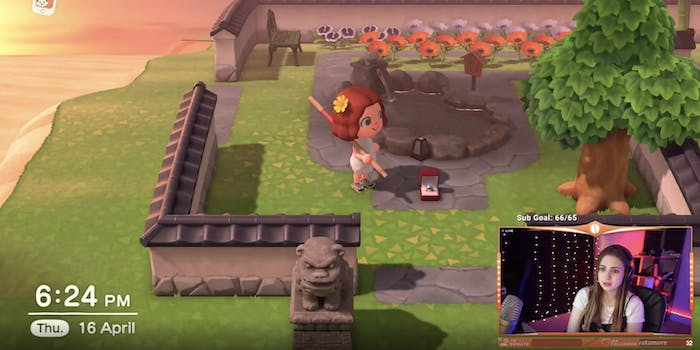 Viewers were heartbroken for her.

Animal Crossing: New Horizons continues to entertain users during quarantine. One Twitch streamer, Jenwaaa, made the game even more exciting when she decided to use the game to propose to her boyfriend. But when things didn’t go as planned, viewers were heartbroken for her.

Jenwaaa said a fan gave her a ring in Animal Crossing, which she decided to then give to her boyfriend, fellow Twitch streamer Enigma.

Jenwaaa planned to walk her boyfriend to her Animal Crossing zen garden, and show him the ring. Jenwaaa walked her followers to her garden on Twitch before she proposed.

When she was ready, Jenwaaa called her boyfriend in from the other room, just saying she wanted to show him something in the game. Jenwaaa’s boyfriend at first seemed impressed with what she had built.

“That’s awesome,” he remarked about the garden.

But he seemed in a hurry to leave. On the other hand, viewers were getting impatient because they were excited to see the proposal.

“What we have all been waiting for,” one Twitch viewer commented.

When Jenwaaa finally showed him the ring, he just laughed, said “OK dude,” and walked out of the room.

Jenwaaa looked hurt at her boyfriend’s reaction, and shut down her stream.

Fans were shocked and upset at her boyfriend’s reaction.

Another user called her boyfriend a “b*tch” for his reaction.

Jenwaaa said later she wasn’t that upset, because she is constantly joking about proposing to her boyfriend, so the Animal Crossing proposal wasn’t that serious.

If her boyfriend had said yes though, she would have had a different reaction. Jenwaaa told Dexerto she would have wanted to explore the possibility further. So there’s still hope fans will get to see a Twitch proposal at some point in the future.