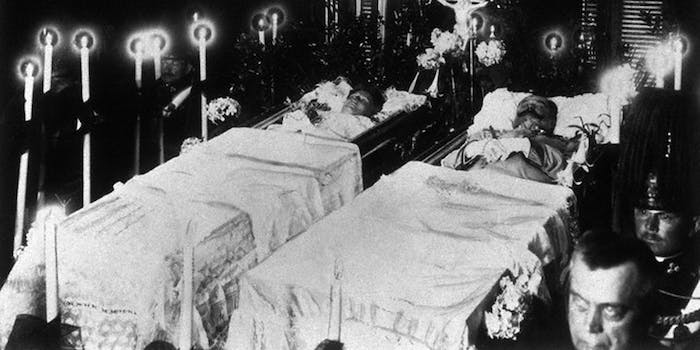 The art of faking your own death on the Internet

Is Andy Kaufman still alive? According to a new book, he might be hanging out with Elvis and Tupac.

Said confusion ramped up again this week, when Kaufman’s close friend and collaborator, Bob Zmuda, told the New York Post that the legendary performer is indeed alive and well, and may be revealing himself to the world very soon. This announcement arrives as a precursor to the book, Andy Kaufman: The Truth, Finally, which comes out October 7. Zmuda wrote this new biography with the help of Kaufman’s partner, Lynne Margulies.

It’s long been rumored that Kaufman had a fascination with faking his own demise, and various reports have suggested that he crafted an elaborate plan to do so, with the intent of resurfacing 20 or 30 years later. Flash forward to 2014, and the speculation around Kaufman’s death (or lack thereof) has almost become the biggest achievement of his life. Last year, The Huffington Post’s Mallika Rao ran a piece chronicling the layers of this conspiracy theory, from a meeting with a professional hoaxer who faked his own death in 1981 named Alan Abel, to an Internet community led by a man claiming to be Kaufman’s long lost son.

However, this latest batch of Kaufman gossip feels particularly strained. Part of what made Kaufman so unknowable was his penchant for faking people out, but in the age of the viral hoax, it seems unlikely he could keep the joke going this long.

The most recent case of “Andy Kaufman lives” rumors before this week’s popped up only last year. Kaufman’s brother, Michael, claimed that he was not only alive, but that he had fallen in love and fathered a daughter. However, the “daughter” was later exposed as an actress, and Michael Kaufman has since backtracked on these claims.

This time around, things are even weirder. Margulies, unlike Zmuda, believes Kaufman to be dead. But she alleges that he was bisexual, and passed away from AIDS, not cancer, as is commonly believed.

In 1999, the Milos Forman film, Man on the Moon, starring Jim Carrey as Kaufman, also stirred up interest in his life and death, amidst a somewhat ambiguous ending, which put the question of Kaufman’s passing in an almost magical light. But attempts to market the movie on this were diminished, when Kaufman’s official death certificate was unearthed.

Many may remember Zmuda best for the film’s portrayal of him, courtesy of a less famous Paul Giamatti. Zmuda has persisted as the chief, if not the only chronicler of all things Kaufman in the meantime. The Truth, Finally follows Zmuda’s Andy Kaufman Revealed!: Best Friend Tells All, as well as Dear Andy Kaufman, I Hate Your Guts, the latter of which is a compilation of hate mail Kaufman received during his wrestling phase, wherein he notoriously got in the ring with several women. The book features a foreword by Zmuda and and introduction by Margulies, whom he met during this period.

For Zmuda to come forward and say that Kaufman is alive now is a bit strange, since he’s previously refuted these rumors online. Granted, one has to remember that the source of these newfound rumors is the New York Post, a publication which isn’t necessarily known for its journalistic credibility. There’s also the unfortunate possibility that Zmuda is exaggerating the tales of Kaufman’s secret life after death in order to ramp up interest for his and Margulies’ impending book release, in the hopes that any new information, however far-fetched, will help them sell more copies.

That said, Zmuda may legitimately believe Kaufman is still alive, and the book may be the call for him to come out of hiding that Zmuda says it is. The trouble with this is that in the age of the Internet, it’s become so hard to take any rumors surrounding celebrity deaths seriously. Sure, usually it’s rumors of someone’s expiration that captures our attention, which makes Kaufman the rare case, in that almost all the rumors surrounding his circumstances suggest he’s still alive.

However, the end results (assuming Kaufman isn’t really alive) are the same, in that they take advantage of the strong bonds that people form with those in the public eye. More often than not, those bonds are transient, as well as completely one-sided. But the fact that we’re still talking about whether Andy Kaufman is alive, thirty years after his supposed death, shows what a strong attachment many still have to him, and to take advantage of that seems a bit cruel.

If information is a source of power and connections are a source of social capital, then a hoax is a manipulation of social power. The costs are significant in terms of lost trust and credibility… perpetrators are counting upon fans’ emotional attachment to the celebrities to generate an immediate reaction and override a more measured response of healthy skepticism. While a hoax may strike some as funny, and there are undoubtedly some instances of funny ones that we might commonly refer to as ‘practical jokes,’ most hoaxes are designed to promote the psychological or commercial interests of the perpetrator at the expense of the victims.

The other side of this is that we’ve all become so callous about celebrity death hoaxes, it’s hard to imagine a scenario wherein any news could come out regarding Kaufman that wasn’t fake. By now, it’s gotten so bad we’ve started to train ourselves to avoid being fooled. If Kaufman did fake his own death, it probably would’ve been hard for him to imagine a world where rumors about the health and well-being of the rich and famous are so rampant, that yet another one feels like nothing more than par for the course.

But certainly, Kaufman is unique, in that the rumors surrounding his death have transformed our whole perception of him. And considering what an enigmatic guy he was, maybe we shouldn’t rule out entirely that he’s one-upped us all. It’s not like he would be the first 20th century icon to want to disappear from public life. Look at someone like J.D. Salinger for instance, who published one of the most important works of American literature in the last hundred years, and then promptly spent the rest of his life trying to hide from his success.

The difference between someone like Salinger and someone like Kaufman, however, is that through most of his career, Kaufman desperately wanted to be seen. The American public may not have known the “real Andy Kaufman,” so to speak, but it’s impossible to deny that this was a guy who forced you to pay attention to him. Moreover, Kaufman came up during the first “Golden Age of Television,” and gained notoriety in a medium that demanded people know your face. This was never an issue for an older, literary-world pioneer like Salinger, who was rarely even photographed.

Which brings us to the next reason that Kaufman’s continued existence is so unlikely. In a country that increasingly watches our every move, using technology to make privacy that much more difficult, it’s virtually impossible that he could have gone on so long without being detected. Is it completely impossible? No, after all, several notorious criminals managed to exist in a digital society while avoiding detection for years, with the help of various underworld associates, of course. But it is extremely, extremely unlikely that Kaufman could pull off the same thing, especially if he’s had anything more than the most cursory interaction with the outside world over the last 30 years.

Perhaps it’s best that some icons remain unknowable. As the middling reviews for a recent book and documentary on Salinger prove, trying to remove the mystery can be an annoying proposition; ultimately, you’re either taking the fun out of the speculation or setting up expectations that the real “revelation” will never live up to. Kaufman’s legacy will live on no matter what, and whether he does or does not come back from the dead won’t change that. Obviously, it would change the final story of Andy Kaufman, but it’s unlikely this would make anyone love him less or more than they do right now.

Kaufman’s humor changed the world forever. He was a precursor to the weirdness of Tim and Eric, without being so unapproachable, and the genius trickery of Nathan Fielder, without the cynical edge. And if he is out there, hanging with Elvis, waiting for the right time to make his grand reappearance, then good on him, he really did pull off the greatest prank of all time, and if anybody could do it, it would be Andy Kaufman. But for now, if we really love Andy, the best thing to do is to let him go.

Photo via paulkrus/Flickr (CC BY 2.0)