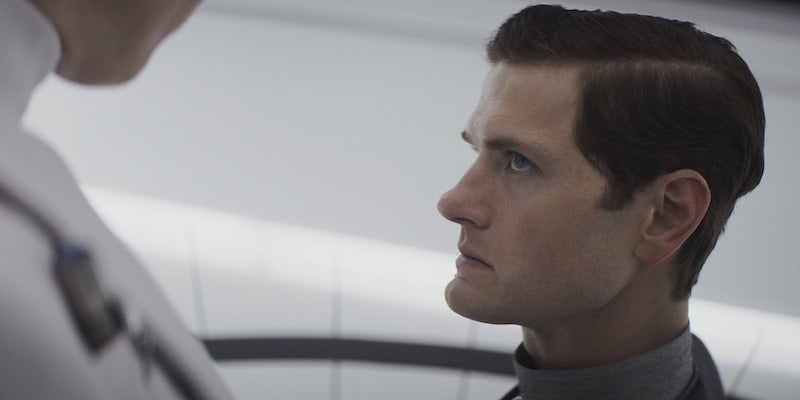 ‘Andor’ episode 9: Syril Karn is the Empire’s only true believer

Even the other Imperials don't know how to handle him.

Exploring the grimy origins of the Rebel Alliance, Andor has already introduced us to a wide spectrum of revolutionaries, all sharing one thing in common: A staunch belief that the Empire must be stopped, even at great personal cost. Over on the Imperial side, personal dedication is far less important.

All of the show’s villains benefit from Imperial power, enjoying the ability to bully the weak or profit from the Empire’s financial system. They parrot the party line about the Empire being a bastion of law and order, condemning the Rebels as terrorists. None, however, believe this as deeply and sincerely as Syril Karn, whose singleminded loyalty makes him an outlier.

Introduced as a mid-level corporate cop, Syril may have the strictest moral code in the entire show. Refusing an order to sweep a murder case under the rug, he pursues the suspect with self-destructive relentlessness, resulting in several deaths, an interplanetary scandal, and the end of his police career. But this only spurs him on. Unlike Cassian, Syril isn’t swayed by the temptations of a peaceful life. He keeps plugging away at an off-books investigation, thrilled to be questioned by ISB agent Dedra Meero – something that Dedra herself finds discomfiting. It’s just not normal to happily cooperate with an ISB interrogation.

Episode 9 sees Syril follow Dedra to her office building, prompting a conversation that reveals how little he understands the world around him. Accosting her on the street, he offers up his fervent thanks—both for a promotion at his new job (which she claims she had nothing to do with) and for continuing the investigation into Cassian Andor. He’s oblivious to the fact that she finds his enthusiasm repulsive.

In Syril’s mind, he and Dedra are kindred spirits in the battle to uphold Imperial law. Meanwhile, Dedra is caught between disgust and disbelief. “Are you stalking me?” she demands, trying to shake him loose. “I thought I’d ruined my life,” he replies, with wide-eyed intensity. “Just being in your presence, I’ve realized that life is worth living. I realized that if nothing else, there is justice and beauty in the galaxy.” To put it mildly, this is not the reaction Dedra typically receives for doing her job as a sadistic fascist enforcer.

From his very first scene, Syril fundamentally misunderstands how the Empire operates. He believes that the system is (or should be) a meritocracy and that corruption is a flaw rather than an integral element of Imperial society. He has fully internalized the propaganda that most people only accept on vague terms.

Dedra Meero, for instance, is a shining example of Imperial success—a competent go-getter who strives to destroy the Rebellion. But she isn’t noticeably driven by ideology. Her goal is to climb the ladder and outsmart her rivals. She’d behave exactly the same way if she worked at an investment bank. Very rarely does she encounter a true believer, because unlike in the Rebellion, those people aren’t necessary to the Imperial cause. There’s something comical about anyone seeing her as an admirable figure, given that in this episode alone, she ordered two torture sessions and an execution without trial.

Syril’s home life offers some insight into his rigid personal philosophy. Belittled by his controlling mother, his middle-class Coruscanti upbringing left him sheltered from the reality of the Empire at large. If he’d grown up somewhere like Ferrix, it would be much harder to maintain the delusion that Imperial authority is the only route to peace and justice. He seems startlingly naive compared to Cassian or Bix Caleen.

Within the structure of the show, this puts Syril in an interesting position. Rather than being a direct foil to Cassian, he’s more like the Imperial equivalent of Saw Gerrera: A volatile extremist whose behavior even alarms his supposed allies. In his attempts to uphold the law, he accidentally flouts the unwritten rules of the system. This often makes him one of the funniest characters to watch—and an intriguing wildcard as the story enters its final act.