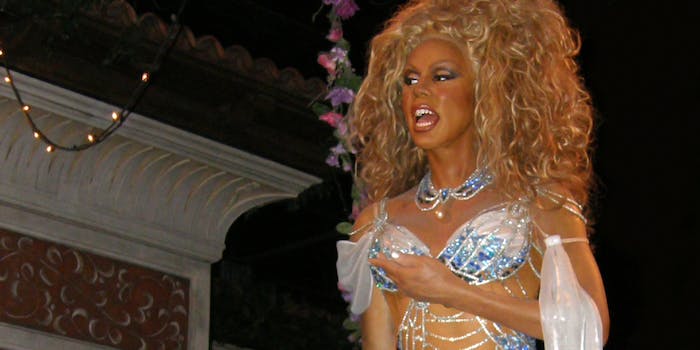 You can walk in the heels, Ru, but you’ll never own that life.

To say I’m a fan of your show is putting it lightly.

I think, at it’s best, RuPaul’s Drag Race isn’t just the best gay-themed show on TV. It’s a place where I feel at home, nestled amongst your queens and effeminate gays. On television, sissy boys are usually the butt of the joke, but on RuPaul’s Drag Race, they’re skilled comedians and performers. They can give face while being hurled through the air or make a glam jumpsuit of dental floss and tampons. They’re divas but more importantly they’re icons and role models to those of us who feel that RuPaul’s Drag Race is a space for gays like us.

I’ve long held the belief that what you enjoy can be problematic, but I can’t continue to ignore the fact that my joy comes at the expense of others.

Your show recently featured a segment in which contestants were shown pictures of women and asked to determine if their body parts belonged to a “female” (aka a biological woman) or a “she-male” (a drag queen). “Shemale” is well-known to be a derogatory term used against transgender women, and your show uses it liberally. Transgender activists rightfully freaked out—because this is an issue that has come up repeatedly. And it’s clear you still aren’t listening.

In the past, you’ve made it clear you don’t want to listen. During an interview, you told the Huffington Post that as a long-time LGBT activist, you’ve earned the right to use whatever language you want. You said that it was a matter of intent—because when you use the t-word (the one that rhymes with “fanny” or “banany”), it comes from a place of love; we’re all family here.

But the problem is that the community isn’t a family. When you look at gays, lesbians, transgender people, bisexuals and queer people, we’re a set of loosely connected people who often don’t have much in common. We’re not one community; we’re a thousand communities that have to share space with each other—to respect each other and co-exist peacefully. You’re no more in the transgender community than I am Channing Tatum or a Russian space princess.

And you and I, Ru, we don’t even know each other. I know you from TV and that time you were in the Brady Bunch movie and you know me as of two minutes ago. Let me introduce myself: I’m Nico Lang. I’m creepily obsessed with Amy Adams, I love putting nutella on everything and eating sandwiches in bed and last time I checked, I’m not related to you.

Even if you were my own grandmother, I wouldn’t let you call my friends she-males, although I don’t think my grandmother knows that word. She still doesn’t know what Facebook is and was surprised to find out that Anderson Cooper was gay. In other news, I think she might be headless.

We put up with a lot from the people we admire, but “family” doesn’t give them license to continue to screw up and say they’re doing it in the name of love. In the movie Love Story, Ali MacGraw claimed “love means never having to say you’re sorry.” That’s not true. Love makes you accountable and responsible. Love is the most powerful thing in the world, and it means that you’re held to a higher standard. Love means that you have to say sorry until you get it right.

I don’t expect you to apologize. I know you won’t. In the interview I mentioned before, you chided Lance Bass for apologizing when used transphobic language. You advised him to tell his transgender critics to “f*** off.”

Do you realize what you’re saying? Millions of gay men look at you as a life model, imitating the catchphrases and bon mots you’ve popularized in your show. Since RuPaul’s Drag Race premiered in 2009, you can’t go out without hearing cries of “Yaas queen!” or “You better werk.” Everybody knows what shade is these days. Even my straight boss accused someone of throwing shade the other day. It was weird.

By encouraging Lance Bass to use language that transgender people have told you time and again they find offensive, you’re further dividing our communities. You’re making it less likely that they’ll be friends with or even get to know a transgender person. How can you be friends with someone who calls you a “she-male” all the time?

If my straight friends decided to greet me by yelling “Hey, faggot!”, we wouldn’t be friends anymore. I have a complicated history with that word, from years of having it yelled at me in Middle School or written on my locker. It’s my history to claim and the history of guys like me who grew up believing that word made you nothing.

Originally, “faggot” came from the middle ages, the days when we burned witches. It wasn’t thought that gay people were so horrifying and disgusting that they didn’t even deserve a proper burning. We were just thrown in with the kindling, called “faggots” because we were no better than a pile of sticks. And I know what it’s like to have someone believe you should burn. I grew up in a Baptist church after all.

But I don’t know what it’s like to be called a “she-male” or be scared that my parents might love me less because my birth gender doesn’t match the person I know I am. I don’t know what it’s like to see my friends murdered or look at their death in the paper and see that the news couldn’t even get their gender right—to honor the person they died to be.

I’ll never know, and neither will you. You don’t get to claim that history. You can walk in the heels, but you’ll never own that life.

RuPaul, you’re a force for so much good in the world, but continuing to ignore this issue only will further the animosity many transgender people feel toward your show and the example it sets for the community. Every week, you challenge your contestants to break barriers and push themselves to do more in order to prove why they’re America’s Next Drag Superstar. To do that, they have to listen to their critics. It’s about time you took your advice.

Stay fierce, Ru, but tell those nasty words to sashay away.