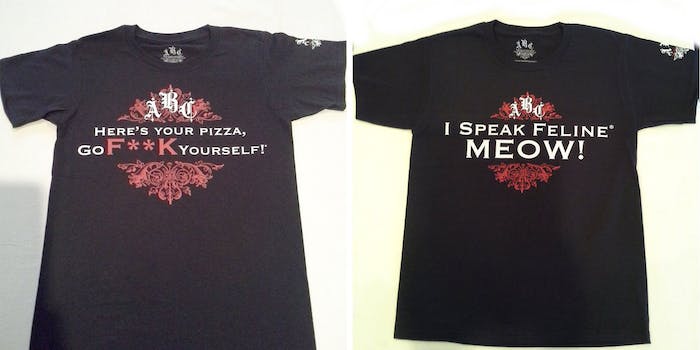 Now you can boast about "surviving" your dining experience at the Kitchen Nightmare.

It spawned a viral television episode, an epic Facebook meltdown, a tell-all Reddit AMA, and even a NSFW parody. And now, Amy’s Baking Co., the Kitchen Nightmare so vile that even celebrity miracle worker Gordon Ramsay couldn’t cope with it, has cashed in on its own notoriety.

The Scottsdale, Ariz., restaurant has started selling merchandise based off the notorious episode wherein viewers learned that controlling owner Amy Bouzaglo and her passive-aggressive husband Samy had driven off a hundred employees in under a year, then watched as Ramsay himself gave up and stormed out.

The merchandise, which so far consists almost totally of $30 T-shirts, makes self-aware fun of the restaurant, featuring quotes from the episode and urging its diners to embrace the hellish dining experience. “Here’s your pizza, go F**K yourself!” reads one shirt, while another proudly proclaims that the wearer has “survived” the ordeal.

Bouzaglo became known for her bizarre behavior both during the episode (she made cat noises) and after, when she went on a rampage against the many baffled viewers who showed up on Facebook. Shortly after the episode aired, rumors flew that Samy Bouzaglo faced deportation and that the bizarre baking business was actually a money-laundering front.

But the notoriety hasn’t been a total disaster for the restaurant, which briefly closed, then had a grand reopening. Viral videos of the episode on YouTube have been viewed millions of times, and the restaurant’s Facebook has gotten over 100,000 likes—though in this case, “like” is probably not the most accurate description.

“Did you buy them at Costco, like your desserts?” asked Facebook viewer Charles Hines when the site announced the opening of the merchandise store last night. (The restaurant’s response: “No, but we do love Costco!” Costco undoubtedly appreciates the recommendation.)

Lest you’re thinking this is one kitchen nightmare that’s all for show, that may not be true, at least for its employees. The grand reopening reportedly comes with a draconian employee contract that includes a non-compete clause, makes weekends and holidays mandatory for every employee, and includes a $250 fee if they no-show for either one.

Yikes. All that and they have to play a thankless role in the effort to restore the baking company’s good will: The company claims a portion of all their sales will go to help the victims and families of firefighters lost in a spring lightning fire, which must be small consolation to the waitstaff whose tips they stole during the episode.

As for whether anyone will actually give the restaurant money for its misplaced sense of humor, I guess if the next item on their list is to construct “Amy’s Funhouse of Horror” out of the menacing, meowing face of its owner, we’ll have our answer.