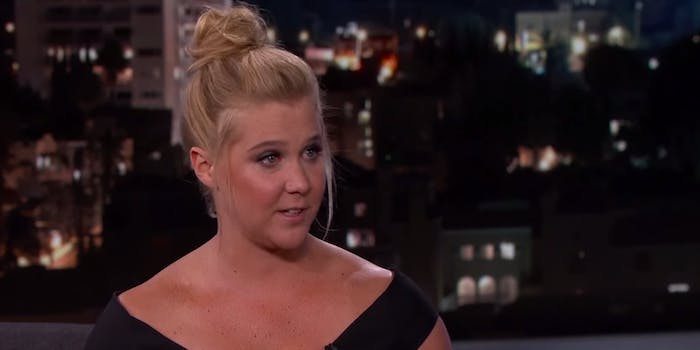 For all her gutbusting moments of triumph, one of Schumer's recent acts deadpanned. Horribly.

Without a doubt, Amy Schumer is one of the edgiest comedians to break and enter into mainstream American comedy. But for all her gutbusting moments of triumph, one of her recent acts deadpanned. Horribly.

Aside from the occasional red carpet stunts, Inside Amy Schumer paints the comic as the rambunctious BFF everyone wishes they had, with a side of incisive social commentary to boot. The jury’s still out, though, on just how effectively Schumer’s comedy pulls punches at an equal weight class or above, without taking cheap shots at marginalized groups. Now that she’s responded to questions and calls for accountability that, on the whole, came from a constructive, critical fan perspective, Schumer’s outright dismissal has generated a discussion about whether or not she’s truly as progressive and forward-thinking as she—and her public—thinks she is.

In an extended note posted on Twitter, Schumer addressed recent critiques of her comedy, particularly how it represents issues of race and feminism. Writing for the Daily Dot, Anne Thériault pointed to Schumer’s self-effacing “dirtbag” identity and a frank, hilarious style of addressing issues of sexuality, beauty standards, fatphobia, and rape culture. At the same time, Thériault also noted Schumer’s perpetuation of gendered stereotypes, as well as her need for improved awareness on issues of race, both on the show and in live appearances.

“While Schumer is undoubtedly funny and talented, a lot of her work seems like the same old bullshit being sold to us in glossy feminist packaging,” Thériault wrote. “It seems like people are quick to turn a blind eye to Schumer’s more troublesome work because she’s one of the ‘good’ ones. But how good can a comedian be when they’re using their platform to punch down? Of course, everyone is flawed and no one is perfect, but not making racist jokes is pretty basic. And the same goes for perpetuating harmful stereotypes about women.”

Combined with talk of Schumer’s purported “shockingly large blind spot around race,” as the Guardian’s Monica Heisey argued, Schumer said enough was enough. In doing so, she didn’t directly address the content of her comedy, but rather resorted to pulling out all the same tired talking points made by well-intentioned white people who may very well not be aware of their own privileges, limitations, or personal biases. Schumer wrote on Twitter, in part:

I will joke about things you are uncomfortable with. And that’s OK. Stick with me and trust that I am joking. I go in and out of playing an irreverent idiot. That includes making dumb jokes about race. I enjoy playing the girl who from time to time says the dumbest thing possible and playing with race is a thing we are not supposed to do, which is what makes it so fun for comics. You can call it a “blind spot for racism” or “lazy” but you are wrong. It is a joke and it is funny. I know that because people laugh at it. Even if you personally did not … Trust me. I am not racist. I am a devout feminist and lover of all people … So move on to the next person more deserving of your scrutiny and not the girl in your corner. Sincerely, Amy (a dirty half Jew).

Schumer seems to have bypassed the praise of her comedy that accompanied the constructive critiques, from people who otherwise assume she may have the best of intentions, even though the outcome feels like an attack on their humanity. It’s not all about “political correctness,” nor is it about audiences cozying up to comedy that may push their buttons. It’s about fine-tuning the act so that it can still be as edgy and thought-provoking without Schumer hurting the people she’s purportedly helping.

Of course, no comic will please everyone, and may ruffle feathers in an attempt to push the boundaries of social discourse, even intentionally. After all, good comedy isn’t all about the laughs. As Schumer demonstrates, comics can indeed serve a few chuckles with some nuggets of wisdom on the side. And now is the time for Schumer to show she’s listening, processing, and truly heeding her fans’ concerns. However, here’s where her responses elicited a chorus of boos:

1) “I am on your side and you shouldn’t criticize me when I’m being helpful.”

Being an ally isn’t an identity or a status symbol, it’s an action rooted in justice for communities that have been underserved, ignored, or marginalized. One can be helpful in some ways and harmful in others, but the people who are best suited to understand the distinction are members of the affected groups. In this context, Schumer’s an ally on racial issues, but is also working within feminism as a woman, where some of her peers have raised a challenge. Instead of writing them off as haters or merciless critics, Schumer can instead take heed and work to improve as best as she can, based on the constructive feedback from people who, by and large, are her fans.

Perhaps the most terse, defensive way to deflect criticism of racialized or gendered humor is the “everyone knows I was kidding” appeal. It just doesn’t work. Everyone already knows it’s a joke, and understands the words within context, but it’s the content of the words at issue for the groups raising pointed concern. If the joke was as good as the comic thinks it is, then how it was delivered and worded would remove any doubt. That’s where it can be beneficial for people like Schumer, Jerry Seinfeld, and their counterparts to learn how to properly filter critique and not dismiss any outcry as people being too concerned with “political correctness.”

3) “I’m not just your average white person. I have a marginalized identity too.”

At the end of Schumer’s Twitter note, she signs off with the not-so-subtle nod to her Jewish heritage, denoting that she’s different than a white supremacist or the average white person who has little or no personal connections with people of color and women who ascribe to ideals of gender equity and justice. However, it’s important for well-meaning white people like Schumer to not conflate one’s ethnoreligious heritage with the experience of being a person of color in America. Yes, she’s half-Jewish. However, she’s still a white woman, and thus a member of a group that wields power and privilege along lines of race.

4) “But people laughed, so clearly you’re just too uptight. Calm down.”

Claims of “oversensitivity” and “lacking a sense of humor” get routinely deployed to shut down criticism from marginalized groups, regardless of the offending party’s actual beliefs or motives. It assumes that criticism automatically aligns with being a complete killjoy when, indeed, the constructive remarks from critical fans come from a place of wishing to elevate the enjoyment by editing out elements that cause avoidable harm. Rather than shame or police the feelings of people in marginalized groups, people like Schumer who are subject to critique can ask more questions and have a dialogue about what specifically in her work didn’t go over well. Not all of the criticism has been sweeping and has taken the form of valid questions about how her work translates to different audiences.

5) “Comedy pokes fun at things that people usually can’t play around with, so I’m just doing my job.”

As Thériault highlighted, and as has been said often during discussions about political correctness and comedy, good comedy responsibly pushes buttons, typically to expose or elevate discussions about values and social norms that need to be questioned or called out. Schumer can do her job, and do it even better by figuring out how she strikes a balance between being edgy and being downright condescending, disrespectful, and dismissive of the subjects and people that made her comedic material so refreshing in the first place.