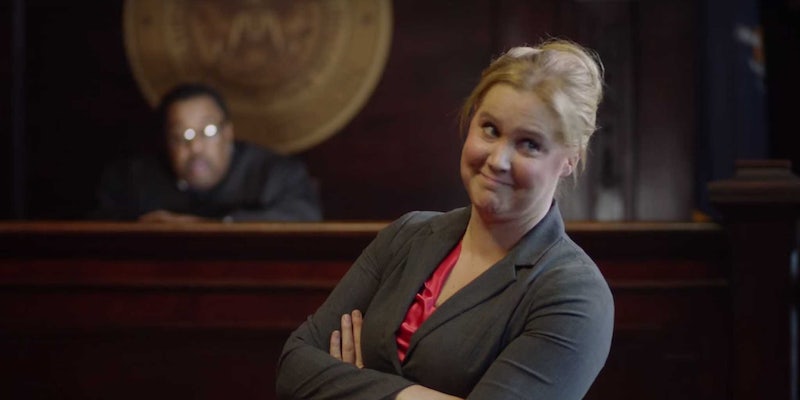 The Amy Schumer backlash and the problem with social justice trolling

We all need a 'teachable moment.'

Is Amy Schumer a racist? Well, that depends on who you ask. In a much-discussed piece for the Guardian, Monica Heisey argued that the Comedy Central star and “viral queen” has a “shocking large blind spot around race.” The Daily Dot’s own Anne Thériault felt Schumer’s feminist track record was lacking when it came to issues of intersectionality: “Amy Schumer frequently makes jokes that perpetuate stereotypes rather than dismantle them. … It’s hard not to feel like Schumer is only here for women who look like her.”

As someone who admires Amy Schumer’s work, even when she trips up, I think raising these issues about someone’s unintended racial politics are an important part of accountability. Criticism isn’t just about calling someone out; at its best, we ask questions of those in power. We not only demand change but guide others toward greater mindfulness. It shouldn’t be about cutting people down or burning them at the stake. It should be about helping all of us to be better.

So why then does so much of the response to Amy Schumer feel like trolling in the name of social justice?

At their first meeting, Aaron comments that he enjoys working in sports, because it means he gets to work with a lot of—at which point, Schumer interjects: “Black people?” This sets off a discussion between the two on the subject of whether Amy has any black friends. Attempting to prove to Aaron that she does, Amy shows him a photograph of a black waiter refilling her glass.

While Robinson claimed that his audience was silent (read: aghast!) at this joke, it got one of the biggest laughs in my packed Battery Park theater on opening night. I agree that many of her previous attempts at playing the “irreverent idiot”—or as she puts it, “the girl who… says the dumbest thing possible”—missed the mark, but I thought this was a necessary step forward for her. The jokes Heisey and Thériault took issue with made “crazy Latinas” the butt of the joke. Here, the problem isn’t the black waiter, but the character’s own blind spot on race. It accidentally offers an eerily direct response to the exact issues to which those authors were drawing attention.

The distinction between reproducing racism and commenting on a character’s flawed behavior is especially important within the context of Schumer’s film—and her greater work. The character of Amy is in no way aspirational: She dumps a guy simply because she’s too high to deal with his emotional needs. She spends most of the film alienating her friends and distancing herself from her loved ones—including her grieving sister, following the death of their father. Trainwreck’s protagonist fully lives up to the film’s title.

In an essay for the Atlantic, Megan Garber argues that Trainwreck signals the rise of the “ladyjerk,” in which female characters are allowed to be just as damaged as their male counterparts. She might not be nearly as bad as cable TV’s storied male anti-heroes—from Don Draper to Walter White—but Schumer is exploring daring new possibilities for women onscreen.

Her story—the wounds she inflicts on other people as she makes her way, fitfully, through the world—may not be particularly endearing. She herself might not be particularly likable. But that is not the point. And the not-the-point-ness itself is, in turn, a very good thing. It puts the Schumer of the big screen in league with the Mindy of The Mindy Project and the Liz of 30 Rock and the Annie of Bridesmaids. It claims that niceness is, like any other quality in the complex tangle of things that make a woman and a person, a contingency. It insists that assholery is, for better or for worse, an equal-opportunity affair.

And exploring the tribulations of the “female fuckup” has long been a theme in her work. The scene is strikingly similar to a well-received sketch from Inside Amy Schumer, her wildly popular TV show. In the segment, “Urban Fitters,” Saturday Night Live’s Sasheer Zamata played a clothing store cashier tasked with helping Schumer’s character check out. The problem is that “Amy” can’t seem to identify which retail worker helped her on the floor. The reason? He was black, and she feels weird about bringing it up.

According to the Onion A.V. Club’s Kate Knibbs (who has also contributed to the Daily Dot), this sketch is indicative of Schumer’s comedy at it’s best, by “[showing] Schumer’s character trying to be racially sensitive and failing.” Thus, “Urban Fitters” wasn’t punching down at the black employees who have to deal with racism every day of their lives, but those of us who are so uncomfortable talking about race that we come off more than a little racist.

In her character’s own struggle to see outside her own racial worldview, we can see something of Schumer herself, an imperfect person slowly working to be better. Amy Schumer has apologized on Twitter for her failings on race, and what’s unfortunate is that critiques like Robinson’s aren’t helping the conversation by continuing to insist that Schumer remains as clueless as the characters she plays.

But the “Trainwreck is racist” train isn’t just missing the point—it’s devaluing social justice by making it into something it shouldn’t be. This recent Amy Schumer controversy is reminiscent of the Trevor Noah backlash from earlier this year, when the South African comedian was named Jon Stewart’s replacement as the host of The Daily Show. From 2009 to 2012, Noah made some very unfortunate tweets (six in total) about “Jews” and “fat chicks,” which are more than offensive—they’re also bad comedy.

Criticism isn’t just about calling someone out; at its best, we ask questions of those in power.

As the Washington Post’s Caitlin Dewey pointed out, this wasn’t necessarily a commentary on Noah’s own views now—after all, a lot changes in three years—but the perils of growing up on the Internet. “A lot of people have made bad jokes in their 20s,” Dewey wrote. “The only difference now is that those jokes are memorialized forever on the Internet—and readily ripped out of their chronological context, and away from their intended audience, as contemporary proof of their sender’s bias or stupidity or ill intent.”

But that’s exactly what Noah’s critics did, applying the Mic model to a human being: These six tweets are everything you need to know about Trevor Noah. As author Jon Ronson explained in an NPR interview, this is indicative of the state of discourse in the Twitter era. “We’re trying to define each other by the worst tweet we ever wrote,” Ronson said. “We’re trying to see people’s tweets as like a kind of clue to their inherent evil, even though we know that’s not how human beings actually are.”

I don’t think these are “just jokes” or that Trevor Noah or Amy Schumer should get a free pass simply because they live in public, but our criticisms should be held to the same standards we ask of others. Too often our outrage devolves into the worst tendencies of the Internet, to deny those around us the same humanity we allow ourselves when we make mistakes. There’s nothing wrong with honest inquiry, but we should ask hard questions of our motives and our goals in doing so. Are we giving others a chance to educate themselves—or are we simply trolling?

There are a number of notable examples of this. The classic case is Justine Sacco, a no-name PR executive who quickly became a worldwide trending topic after an alarmingly racist AIDS joke she tweeted quickly went viral. While AidForAfrica used the gaffe for good—quickly registering the domain JustineSacco.com to solicit donations for HIV research—Sacco received a slew of rape and death threats. When Miley Cyrus performed what was essentially a minstrel show at the VMAs in 2013, she was slut-shamed just as often as critics (correctly) called out her race politics.

While these cases offer examples of trolling at its most violent and dangerous—bullying women off the Internet—trolling can also simply function to shut down actual conversation, and Schumer herself has received her own fair share of death threats. True criticism should instead generate a productive discussion—as well as further dialogue and understanding. As Flavorwire’s Sarah Seltzer wrote in response to the Trevor Noah controversy, mindful criticism “teaches those with a platform to be more sensitive, and if we’re funny, to be funnier and sharper without being bigoted or dismissive.”

This is about progress, not perfection, and Amy Schumer’s “teachable moment” shouldn’t be a one-way street. If the lesson of Trainwreck shows us anything, it’s that learning—especially as an adult—can be difficult, and it seems all of us have a lot of growing up to do.