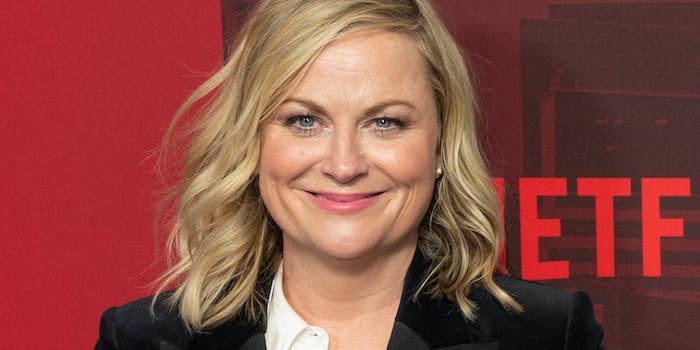 The woman's original photo is from 2008, and it looks a little different.

The story is fake and appears to have originated in 2019 on the site World News Daily Report, whose tagline is “Where facts don’t matter.” A disclaimer at the bottom of the site states, “World News Daily Report assumes all responsibility for the satirical nature of its articles and for the fictional nature of their content.” There are also no reports of this incident in local Miami newspapers.

Many people made jokes about SNL frantically trying to get Poehler on this weekend’s show.

Others called back to a prescient line from Parks and Recreation.

This story has been widely circulated over the last year, but Snopes stepped in Wednesday to debunk it, linking to a Smoking Gun story about a 2008 raid on a Houston strip club, in which 15 women were arrested. The same mugshot is featured, but it shows that the photo in the WNDR story has obviously been digitally altered to make the woman’s smile and eyes appear bigger.

Poehler has not commented on any of this, but her recent Late Night with Seth Meyers appearance was repromoted last night, with the caption, “Amy Poehler reveals a surprising misconception people have about her.” (It’s not the stripper story.)

As of Wednesday morning, the trending story has not been labeled as fake or satire by Twitter.