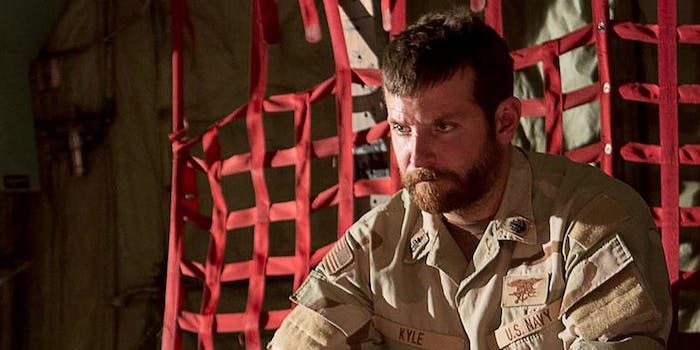 A Republican yahoo made a movie about a Navy SEAL during the Iraq Occupation, and apparently no one foresaw that it would be a total shitshow that would send this country into online hysterics. Clint Eastwood is a man who accused an invisible Obama, alighting upon an empty stool, of being “absolutely crazy” at the Republican National Convention in 2012. He is also a man who is a lauded filmmaker and universally beloved icon, because if America loves anything as much as a war movie, it’s a geriatric western star and his emotionally exploitative directorial work. American Sniper is the culmination of the unquestioning American patriotism that soars as high as an eagle and stands as strong as the second amendment, tied in a pretty bow by the antiquated standards of Hollywood.

Michelle Obama praises the racist propaganda film American Sniper. She watched it on Air Force One and just loved it. https://t.co/or3VhCATf0

American Sniper is your typical pro war propaganda film plz do not allow it to desensitize you or make you feel as if these wars are just.

No desire to see #AmericanSniper. From the reviews, it sounds like a nasty piece of war #propaganda. Somewhat surprised that still works.

A hero is not a racist psychopath #AmericanSniper

A hero is someone who fights for social justice, feeds the poor & helps the homeless

At the same time, the film gives voice to the fact that we as a country have no idea how to have a discussion about a military conflict that has spanned over a decade and affected us all to varying degrees. My mom wanted to see American Sniper because my stepbrother is in the special forces. One of my friends wanted to see the film because she was considering marrying her marine boyfriend. My boyfriend and I wanted to see the film because we wanted to test our resolute political liberalism. The point being, this is a rare film about a subject that in reality we all have some connection to as Americans. For that reason, combined with the film’s enormous budget and the fact that it stars one of the industry’s top leading men as real life sniper Chris Kyle—Bradley Cooper, who landed an Oscar nomination for the role—one would think that American Sniper might actually have had something to say.

Full disclosure, I had to get slightly drunk on whiskey to get myself in that theater last week, which had the opposite effect than intended. My inebriation served only to dull American Sniper’s glorification of war (which is a moot point, of course it was going to do that), while bringing into sharp focus the racist, Islamaphobic, misogynistic themes rampant in a story with a complete lack of narrative drive. Now let us crescendo through those topics.

American Sniper requires of its viewer great leaps in assumptions. One of those leaps is that Chris Kyle and his wife have a healthy relationship founded in love and trust. Chris meets Taya, portrayed by Sienna Miller, at a bar. She is, of course, there by herself because she’s the kind of cool gal who needs to knock back a few no frills shots after work (we never find out what she actually did before becoming a housewife and mother). She also isn’t a “slut,” though, and doesn’t want anything to do with the military men strangely swarming the watering hole. Enter Kyle, who disarms her (pun intended) by seeming uninterested. Insert coy back-and-forth. Then they binge drink, then she throws up (what’s cuter than a girl who can hang, but still needs your help at the end of the night?), he holds her hair, and they get married.

Full disclosure, I had to get slightly drunk on whiskey to get myself in that theater last week.

We’re also are led to believe that Kyle is brimming with patriotism because he goes to war after shielding his hot wife from the television on 9/11. He is in fact so patriotic that despite putting two babies inside of her, he insists on doing four tours of Iraq. She cries a lot on the satellite calls. She’s crying and pregnant at the doctor. She’s crying while the baby cries, too. But he’s still a good husband, and a good American.

To be clear, I am not making an argument against the thousands of U.S. Army men and women who leave their families to serve our country, rather that the relationship between Kyle and his wife is a missed opportunity in the film to explore the very real aspect of the support and strength required of families waiting on soldiers to come home. All we really see Taya do is cry and nag.

While portraying those four tours of Iraq, which is the bulk of the film, we never see civilian Iraqis. Instead we are presented a world in which men, women and children are all militant. Even a kid just playing in the rubble is tempted to pick up the rocket launcher of an Iraqi that Kyle just killed from a rooftop and shoot it into a crowd of marines. Every single Iraqi woman is presented as a veiled she-devil, quietly waiting for her opportunity to pick up a burner phone and blow something up. A family, whose home the Americans have just bombarded, invites the SEALs to eat with them, but only because they are actually terrorists. Even the sheikh is involved with the film’s central villain. The film glosses over Kyle’s unit accidentally getting the sheikh’s son killed but gruesomely exploits every American soldier killed or injured.

While portraying those four tours of Iraq, which is the bulk of the film, we never see civilian Iraqis.

It isn’t that these portrayals aren’t real reflections of what the war was like, but the fact that the ramifications of the American occupation on Iraqi civilians isn’t even alluded to is one-sided at best, racist at worst.

It would be easy to explain away some of these glaring errors in judgment on Eastwood’s part, if the real life Chris Kyle hadn’t been defamed in character by public statements from people who knew him, and by his own book, American Sniper: The Autobiography of the Most Deadly Sniper in U.S. History. In the book, Kyle admits to being extremely competitive for “kills,” and refers to Iraqis as “savages.” He also upon returning stateside reportedly told egregious lies, culminating in a lawsuit by Jesse Ventura of all people, when Kyle lied about punching him for criticizing the military at a bar. By omitting those truths, it’s clear Eastwood didn’t feel the need to tell what would have been a compelling story about a complicated man, but rather chose to glorify the impossible ideal of an entirely virtuous killer.

The biggest shame of all in American Sniper is that it entirely misses the opportunity to explore the real dangers and realities of veteran PTSD, especially in our contemporary times when so many men and women have finally returned home from the Middle East. All of the disabled veterans in the film spend their time jovially bantering at a center where they shoot guns all day and make jokes about each other’s accuracy. Cooper’s portrayal of stateside Kyle is that of a man with a hangover. He’s visibly annoyed by his son at one point and made uncomfortable by a solider who recognizes him for being “the legend.”

The film ends on Sienna Miller giving the most ominous look allowed while still being pretty, to a fellow veteran that Kyle is trying to help by taking him to the gun range. That soldier ended up killing Kyle that day, a scene that if shown would have been pivotal for the discussion of veteran PTSD around the country. Apparently, it was too sensitive to show, unlike the scene where Kyle kills an Iraqi child and another has an electric screwdriver put through his head. The film instead devolves into a montage of actual footage from the memorial service held in February of 2013 for Chris Kyle at Cowboy Stadium in Arlington, Tex.

This film was meant as a one-sided tribute, rather than an exploration of what it meant to fight in Iraq.

The omission of that scene, and alternate insertion of memorial footage, makes it alarmingly clear that this film was meant as a one-sided tribute, rather than an exploration of what it meant to fight in Iraq. Some are saying that the frenzied praise, rational criticism, and responses to criticism that American Sniper has garnered makes the film more divisive than the actual War in Iraq. The response to the film is actually just an echo of the fact that we as a country are to this day incredibly divided about the conflict in the Middle East, as well as a chilling reminder of the events that began the most divided political landscape our country has ever seen. American Sniper makes it clear that what we talk about when we talk about war is always going to be an argument.

This article originally appeared on the Frisky and was republished with permission. Read more from the Frisky:

Who the Hell Still Uses Douche?

How to Handle the Office Fight