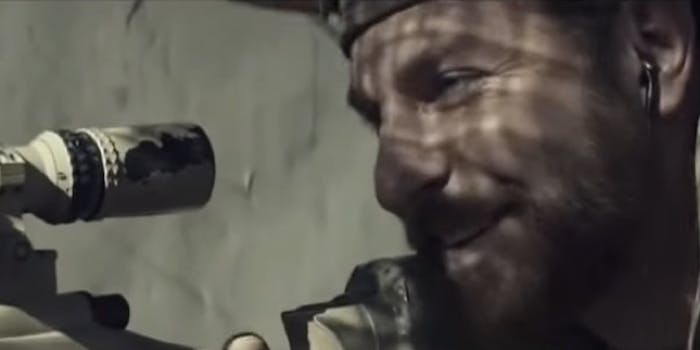 An Internet prankster’s goofball edit of a scene from American Sniper, the ultrapatriotic 2014 Oscar contender starring Bradley Cooper, has taken on a second life as part of a sincere news article. The post in question was supposed to show what movies can teach us about the lives of military families, but it ended up illustrating a different lesson entirely—a lesson about Internet #content.

The fake American Sniper scene, chopped to make it seem as if legendary sniper Chris Kyle is nonchalantly picking off targets while his wife talks dirty to him over the phone, is the work of one Zack Danger Brown. Brown is best known as the man who ran a successful crowdfunding campaign to make potato salad and later got booted from Kickstarter for proposing to grind a jet ski into powder and send it to his backers. Basically, he loves to do weird stuff online and see how people will react.

Brown posted the video over a year ago, but it wasn’t until recently that his work got the attention it deserves. In a post on Medium, Brown describes how his throwaway gag ended up being mistaken for an actual clip from American Sniper.

Despite the fact that the video is faker than Bradley Cooper and Sienna Miller’s plastic baby, Warner Brothers even ran some official American Sniper ads against it on YouTube. This is actually smart: rather than take down videos that make partial use of its movies, WB is attempting to make a little money on them.

But it’s also a strange example of the dissonance created by our not-quite-human advertising algorithms. Now there’s a real ad for American Sniper on a spoof of American Sniper. As Brown points out, there was probably no human behind this somewhat odd decision.

However, there was a human who opted to put the fake video into a real, sincere article titled  “6 movie scenes that show what military families go through.” The piece originally ran Feb. 24 on We Are the Mighty, a news site focused on U.S. servicemembers. To Brown’s delight, it was republished the next day by a much larger news outlet: Business Insider. 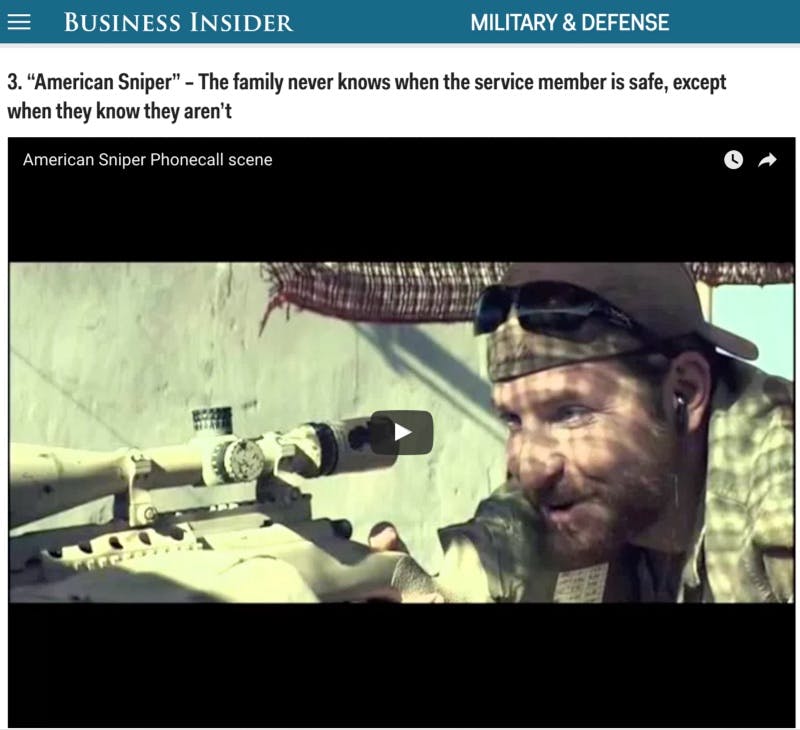 “Taya Kyle had it especially bad in this scene,” the copy explained. Indeed.

Weeks after the story first appeared, and six days after Brown called it out on Medium, the parody video still hasn’t been replaced on either We Are the Mighty or Business Insider. It remains an odd little Trojan horse in the middle of a heartfelt, sympathetic article about the challenges endured by troops and their families.

As the demand for monetizable #content outpaces the current capacities of the people and programs that create it, cracks appear in the machine and pranksters can slip in. The cutthroat competition for precious attention on the internet incentivizes speed over accuracy—the first “American Sniper phone call scene” video you find will usually be the right one, and it (literally) doesn’t pay for a person to check.

Meanwhile, software is still susceptible to identifying a parody as the real thing, and even buying ads against it.

Although the 2016 Internet can seem like a depressing and desolate memescape at times, strange and fascinating things still happen.