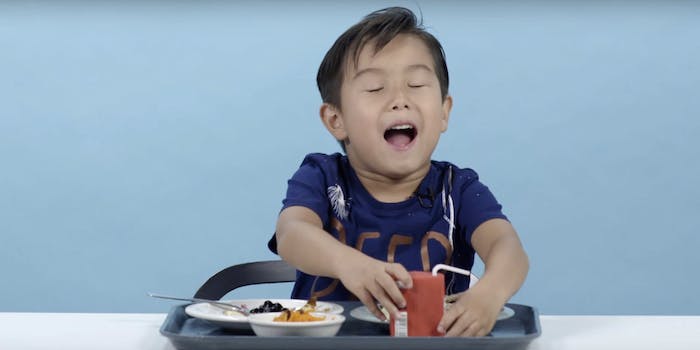 American kids sample school lunches from around the world

Some of them are more open-minded than others.

It really is a crapshoot when it comes to school lunches here in the United States—you never know if you’re going to end up with a digestible cheeseburger or some mound of semi-nutritional goop. But a few kids got the chance to find out that school lunches really run the gamut all around the globe.

In a YouTube clip from Cut Video, youngsters chow down on what other students from other countries eat at midday. We know kids can be pretty picky eaters, but what should be considered a chance to indulge in some cultural sampling quickly turns into rudeness about other nations’ palates. Some of them, however, quickly realize that they might rather be eating the lunches of Sweden or Afghanistan than their own domestic dishes.

Kid we trust the most? The one in the polo shirt who’s totally down to get treated to some wine at 1:55.