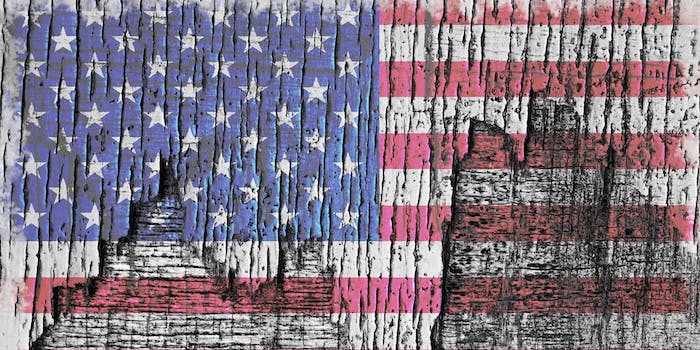 The American Dream is alive, if you're a straight white man.

This week in depressing news, the American Dream is dead.

Actually, according to Nobel Prize winner Joseph Stiglitz, it never existed to begin with. “The American Dream is a myth,” Stiglitz said last week at a speaking engagement in New York, where he was promoting his upcoming book, The Great Divide: Unequal Societies and What We Can Do About Them. According to Stiglitz, the post-WWII era was the last time the ideal version of the American economy was working.

But Stiglitz wagers that since then, not only market fluctuations but toxic American politics, particularly the ones implemented during the Reagan-era, have brought the kind of income equality necessary to facilitate the American dream to a grinding halt. This is evident in such factors as median income dropping all the way down to where it was 40 years ago, while CEO salaries have inflated to 300 times that of the typical American worker.

Stiglitz also notes that minimum wage jobs have become a necessity for too many Americans, instead of starter positions for those just entering the workforce.

CEO salaries have inflated to 300 times that of the typical American worker.

On the eve of the 2012 presidential election, when it started to become clear that President Obama would be the victor, Fox News’ Bill O’Reilly declared that we weren’t living in a “traditional America” anymore. He wasn’t the only one. Other conservatives were also quick to spout platitudes about how this is no longer “your father’s America.”

The funny thing is that, at least economically, they were right. America’s growing wealth gap has rendered upward social mobility all but impossible. Between various factors such as health care, student loan debt, and the growing cost of retirement, income inequality in this country is now more pronounced than ever. Stiglitz himself has been preaching this for years, now with The Great Divide, and previously with his 2012 book, The Price of Inequality.

While he’s hardly the first scholar to wonder whether the American Dream is dead, the scarier part is that the American people are starting to believe this, too. Several polls from the last year alone show U.S. citizens doubting the American Dream’s believability and questioning its achievability.

But there’s a missing piece here: Who are we really talking about when we discuss income inequality and lack of upward mobility? Who are the Americans that truly epitomize the growing consensus that wherever you are, that’s where you’ll stay?

The catch is that the economic divide Stiglitz has zeroed in on is about more than class. Income inequality is just as much a symptom as it is a causality of the other social factors which have long fractured our country. This is why the American Dream has never really existed for anyone in this country save for one group: straight white males.

It’s not so much that straight white males can’t be poor and unsuccessful, of course, especially if they come from a lower-class family background. Rather, it’s that—as opposed to every other demographic in the U.S.—straight white males do not have an automatic handicap when it comes to achieving the American Dream as a result of their gender, sexuality, or race.

Take black Americans, for example. Studies show that while lower income families are more likely to stay stuck in a cycle of poverty, 84 percent of Americans make more money than their parents did. This, however, is not true for black Americans, who are likely to make less money than their parents’ generation—which, in turn, makes it even harder for them to escape the bottom rung of the economic ladder. This is why whites have 22 times as much income on average. On top of which, black Americans who do manage to accumulate wealth have a harder time keeping it.

As opposed to every other demographic in the U.S., straight white males do not have an automatic handicap.

“The American Dream has always been defined by upward mobility, but for black Americans, it’s harder to get into the middle class, and a middle-class lifestyle is more precarious,” writes Sean McElwee at the Huffington Post. He goes on to cite “housing segregation,” the “war on drugs and mass incarceration,” “segregated employment opportunities,” America’s “two-tiered education system,” and “wealth gaps” as mitigating factors which provide evidence to this effect.

He also notes the the way the right has created a harmful narrative designed to obscure all this: “The conservative mind-set is ahistorical—we are told to throw away the legacy of slavery and segregation and expect blacks to pull themselves up by their own bootstraps, ignoring the structural dynamics keeping them down.”

McElwee crafted his essay post-Ferguson, when it became impossible to deny that black Americans were lacking in the metaphorical bootstraps necessary to pull oneself up by. Small steps in terms of representation are not enough to fix this. As long as Dr. Martin Luther King’s dream goes unfulfilled, so will the American Dream for black Americans.

Then there’s women. Despite making up more than half of the world’s population, the gender pay gap in this country remains astonishingly wide. By giving women just 77 percent of what men who do the same jobs earn, we continue to deny them access to the American Dream.

The unsophisticated answer as to why this still occurs probably has to do with the fact that a large portion of America still sees women primarily as wives and mothers rather than working professionals. The gender pay gap, and everything else that prevents women from achieving the American Dream, is a result of pervasive sexism, which resides at the heart of our culture.

And what about LGBT Americans? Queer folks are also affected by an equal pay gap, as ThinkProgress’ Joshua Garcia reports that “gay men earn 10-32 percent less than straight men with similar productive capacities.” Although same-sex marriage is quickly sweeping the nation, you can still be fired in 29 states for having a photo of your same-sex partner on your work desk; in states like Indiana and Arkansas, meanwhile, a much-publicized debate has raged over whether businesses have the right to refuse customers on the basis of gender identity or sexuality.

Furthermore, it’s impossible to look at the disproportionate number of homeless trans youth or murdered trans women in this country and actually come to the conclusion that the American Dream has been realized by the LGBT community.

When someone like Bill O’Reilly waxes nostalgic about how “the white establishment is now the minority,” those outside of that establishment can’t do anything but shake their heads in disgust.

Though the power center of O’Reilly’s “white establishment” is still intact, the U.S. economy has suffered for it. Barring women, the LGBT community, non-white Americans, and all the intersections therein from the American Dream hasn’t kept it alive, it’s just shown how the promise of that American Dream was faulty to begin with. We should strive to redefine that dream, as a beacon of hope for new generations of Americans.

Because if the rampant income equality that currently exists in this country has taught us anything, it’s that we can’t survive when straight white men are the only ones with a chance at attaining it.

Chris Osterndorf is a freelance journalist whose work has appeared on websites such as Mic , Salon, xoJane, the Week, and more. When he’s not writing, Chris enjoys making movies with friends. He currently lives in Los Angeles.