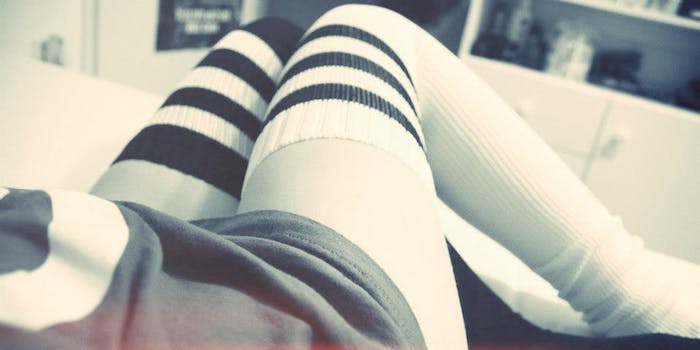 Will criticism from a pervy photoshoot finally bring American Apparel down?

Dov Charney's out, but it doesn't seem like much has changed.

American Apparel has landed itself in the news yet again with a controversial advertising campaign, this time in Britain, where the nation’s Advertising Standards Agency (ASA) has banned an advertisement for appearing to sexualize a child. It’s not the first time the company has been called to task in Britain, or elsewhere, for its highly sexualized and sometimes almost fetishistic advertising. Each time it happens, the conversation gets bigger, and we may have reached the tipping point, courtesy of the Internet.

For American Apparel, the discussion about its practices has simply become too big to ignore. While it might previously have relied on a deliberately provocative business strategy—like Urban Outfitters does with its perennial attempts to grab headlines with grossly offensive products—that tactic might not be effective anymore. The starkest illustration of that may be the forced resignation of the company’s notoriously sexist and creepy CEO, Dov Charney, in the summer of last year.

The incident happened because American Apparel faced growing pressure from both inside and outside. Women working with the company had come forward to express concerns about their treatment, while activists were infuriated by reports of harassment, the company’s “no uglies allowed” hiring practices, and American Apparel’s objectifying advertisements, most of which feature very young, slim models in sexually suggestive poses.

In this particular case, the ad at the center of the controversy features a young woman with dashing red hair sporting a thong bodysuit. As is common with fashion websites attempting to sell clothing, she’s shown from multiple angles so prospective buyers of the product can get a sense of how it might look. In the process, however, her bum is on full display, most particularly in a shot where she’s shown looking over her shoulder with a flirty smile—something that had some viewers, and the ASA, frowning.

Whether people are tut-tutting over bums or not, it’s impossible to avoid the fact that the model looks extremely youthful. That’s in keeping with precedent at American Apparel, and with the look and overall messaging it wants to send with its product lines. This model, however, could easily pass as 16 or even younger, though American Apparel has indicated she’s actually 20. The company believed it was in the right, but the ASA ruled that perception matters more than intent: A viewer could perceive the model as underage, the advertisement is sexualizing, and thus, the ad appears to sexualize a minor.

Her point isn’t without merit; last year, the company was taken to task by the ASA for featuring what amounted to an upskirt photo of a schoolgirl in an advertising campaign. That time, the model involved was 30, according to the firm, which attempted to justify the ad despite the fact that it was featured in a campaign called “School Days,” and the advertised product was—wait for it—the “Lolita Skirt.” British authorities were unimpressed. In a dark twist, British media reporting on the incident had to censor the images to avoid running afoul of internal standards as well as public watchdogs.

To say that the company has a recurring problem is, to say the least, a profound understatement. You can see a choice selection of—censored but still possibly NSFW—particularly egregious offenders at Business Insider.

British authorities certainly aren’t afraid to hit American Apparel where it hurts, arguing that the firm needs to behave in a socially responsible manner. They’ve repeatedly expressed concerns over the sexualized and also voyeuristic nature of the company’s advertising campaigns. American Apparel either refuses to learn or relishes the public attention, and the company also has numerous other venues to express itself—like the U.S.

With much different advertising standards and more lax approaches to the subject, the United States is the land of “nearly anything goes,” and when it comes to American Apparel, it does. But could that be about to change? The Internet is changing the dynamics surrounding companies like American Apparel, because it’s no longer possible to avoid criticisms of the sexism and sexualization in the company’s advertising.

When the company first started blowing up in the heady days of the aughts, social media was in an extremely nascent phase, with only a few early adopters slowly edging into the fold. Today, however, that’s changed. Radically. When American Apparel runs a particularly eyebrow-raising ad, it spreads across the Internet like wildfire, leaving the company eating crow.

Like many other major firms, American Apparel has found itself throwing social media interns under the bus, hastening to come up with excuses for their advertising, and trying to weasel out of responsibility for discrimination. When Nancy Upton, a size 12 woman with a personable smile and endless curves, won a voter’s choice award to be the company’s next model, American Apparel revoked her win—she was not, they explained, their demographic. A decade ago, the incident might have slipped by without a ripple, but instead the Internet got angry.

It’s even become the target of pointed art and commentary, as seen in “American Able,” a photography project featuring a disabled artist who wanted to challenge notions about disability and sexuality. The Internet facilitates easy sharing of creative work like this, confronting the public with a necessary conversation.

Change is, as it were, only a Change.org petition away, and there are nearly 200 petitions alone on the popular site related to American Apparel. These include petitions targeted at the company’s porn-style advertising, sexualized imagery, and use of models who look under the age of 18. The Internet is here, it’s angry, and it knows how to mobilize. American Apparel is being forced to adapt to a landscape in which it can be held instantly accountable for its actions.

The Internet may be on the cusp of accomplishing what activists have been trying to do for the last decade. The company’s new CEO, Paula Schneider, says: “My goal is to make American Apparel a better company, while staying true to its core values of quality and creativity.” She claims to be specifically interested in making some radical changes to the company’s advertising style, tone, and approach; perhaps she’s tired of adjudicating endless disputes between American Apparel and government agencies like the ASA, or maybe she’s frustrated by the recurring PR flareups that happen with every new campaign.

Of course, making changes at American Apparel is what the Internet has been trying to do all along. It’s about time the company caught up.