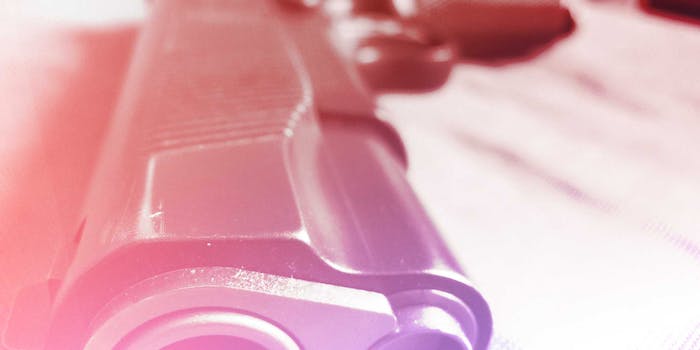 There's been at least one shooting per day this year. It cannot remain this way.

Once again, America is being forced to talk about gun control, otherwise known as “the impossible dream.” This time, the discussion has been reignited following shooting deaths of two journalists in Virginia, caught on live television. But the tone of the dialogue feels awfully familiar. Same rhetoric, different massacre.

With an election drawing near, the opinions of many presidential candidates placed the event within the context of national politics. Donald Trump trotted out the tired mental illness trope, a typical framework to derail the conversation from gun laws. And although avowed gun control advocate Hillary Clinton doubled-down on the need for action, she didn’t go into specifics. Even the Internet’s favorite politician, Bernie Sanders, has skirted the issue, which is unsurprising given his somewhat checkered history on the matter. And while Chris Christie acknowledged the shooting as a “tragedy,” he insisted that “more laws” are not the answer.

These responses are indicative of career politicians passing the buck on a complicated, but necessary policy issue. Oddly enough, however, Christie may be on to something: We don’t need more gun laws. In fact, we need different gun laws altogether. The existing ones just don’t work.

On a state-by-state level alone, American gun laws are astoundingly lenient, especially when it comes to legal age of ownership. In Vermont, 16-year-olds are allowed to conceal carry as long as they have the permission of a parent. They can also purchase handguns in the state, while Minnesota, Alaska, Maine, and New York allow 16-year-olds to purchase rifles. Montana even permits the sale of firearms to 14-year-olds. In many of these states, you are allowed to carry a firearm before you can join the military, vote, go see an R-rated movie, or drive a car. And in 20 states, there is no age restriction on the purchase and possession of shotguns.

Some state laws governing where guns can be carried are just as worthy of ridicule. For example, in places like Colorado, Oregon, Wisconsin, and Utah, concealed carry is allowed on college campuses. And in Mississippi, you can do that and take guns into courthouses, polling locations, and terminals at airports. There are also a growing number of states that may strike down federal restrictions on carrying guns in bars, daycare centers, and churches.

In Indiana and North Dakota, an employer can be sued for even asking about gun possession, while in Georgia employees can’t be fired for bringing a gun to work. Florida and 24 other states have enacted infamous “stand your ground” laws. And for violent felons in Minnesota, Ohio, Washington, Georgia, Nebraska, and Montana, there are easy pathways to getting gun rights back shortly after leaving prison.

In 20 states, there is no age restriction on the purchase and possession of shotguns.

State gun laws remain woefully inconsistent and inane, but gun advocates’ reactions to tragic shootings may be even worse. Incidents like the Sandy Hook massacre, for example, prompted stronger pushes for legislation that would make it easier for anyone to buy a gun and carry it everywhere, regardless of federal restrictions.

Under federal law, there is no minimum age for gun possession. Although other countries find this puzzling, these regulations likely won’t change anytime soon. Thanks to a political stalemate, there’s seemingly no amount of mass shootings that could actually propel congress or the President to enact real gun control in America.

“When Mr. Obama or the mayor of Charleston says that gun control would be a logical response to Wednesday’s killings, the message triggers a tribal response,” according to the Economist. “The America that believes that guns make the country more dangerous—urban, educated, Democratic America—is proposing to disarm the America that is sure (indeed increasingly sure) that safety lies in keeping firearms close by. As a result, nobody is about to disarm anyone.”

The NRA has managed to convince many Americans that the Second Amendment is etched in stone, making it utterly impossible to change. The right to bear arms—as designed by the Founding Fathers—has little in common with the way we perceive it today, and there’s no reason why we can’t change our approach to lethal weapons. Australian comedian James Jeffries summed it up in a surprisingly insightful bit of stand-up:

“I’ve had people come up to me… and scream… ‘You can not change the second amendment.’ And I’m like, yes you can. It’s called an amendment… Don’t think your constitution is set in stone, you’ve changed things before. You used to have prohibition… You used to have this other thing in America called slavery!”

As an Australian, Jeffries has a profoundly different viewpoint on gun control. In fact, Australia has demonstrated proven results when responsible gun control laws get implemented. Following the Port Arthur Massacre in 1996, then-Prime Minister John Howard led a bipartisan effort to push through the National Firearms Programme Implementation Act. At the time, much of the Australian public wasn’t in favor of it, but the results have been undeniable. There were 11 mass shootings in Australia, adding up to 100 deaths in the decade prior to 1996, but none have occurred in the nearly 20 years since.

State gun laws remain woefully inconsistent and inane, but gun advocates’ reactions to tragic shootings may be even worse.

“In the decade after the gun control law was passed, gun homicides fell by 59 percent and firearm-related suicides fell by 65 percent,” writes Huffington Post Canada’s Joshua Ostroff. “There was no related increase in non-firearm homicides and suicides. An earlier study estimated that 200 lives were saved every year thanks to the decrease in suicides alone.”

How do countries like Australia get these results? Gun control measures are never simple, but they are rational. There’s a distinct logic to most countries’ gun control measures—and they stand in direct contrast to the United States’ laissez-faire approach.

As Dr. David Hemenway notes in an interview with The World Post:

“The background check in the United States basically just confirms you’re not a convicted felon, and it doesn’t allow for much police discretion. Other countries have a much higher bar to pass. … Almost all of those countries require gun training before you’re able to obtain a gun, and once you get a gun, you have to store it properly. Many other countries don’t let you obtain a handgun without a good reason.”

Similar legislative measures have also proven effective in the United Kingdom, Canada, Japan, Israel, and Norway. But the U.S. prefers to be willfully ignorant, even to recent trends. Of the 12 worst shootings in U.S. history, six have occurred since 2007. There have been 885 mass shootings since Sandy Hook alone. And new data appears to indicate that we are now averaging one incident that qualifies as a mass shooting per day.

New data appears to indicate that we are now averaging one incident that qualifies as a mass shooting per day.

But mass shootings are part of a much larger problem: 300 people are shot in the U.S. every day. Of those, 90 die. And astoundingly, Americans account for less than 5 percent of the world’s population, but almost 50 percent of the world’s guns. With 29.7 million gun homicides on record every year, we have more average gun deaths per capita then the next four countries on the list combined. States with more guns have more gun deaths. And it’s been found that suicide is 96.5 percent more effective when a gun is used, so, unsurprisingly, the states with the most guns also report the most suicides.

Because of our gun laws, the United States is a global embarrassment. Nearly every other developed nation has enacted smart policy reforms that make our existing measures seem seem pathetic, if not archaic. Yet government officials still can’t muster the will to clamp down on gun violence.

Per Dr. Hemenway’s words, when other countries debate the adoption of stricter gun control laws, they tend to ask themselves, “Do we want to end up like the United States?”

Photo via Teknorat/Flickr (CC BY 2.0) | Remix by Max Fleishman