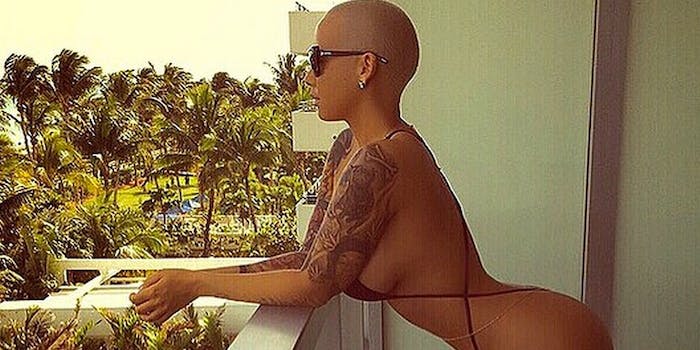 Amber Rose and Kim Kardashian have nothing to apologize for.

If you are a celebrity and you don’t have a NSFW photo of yourself on the Internet, do you even exist? Model, actress, and former Wiz Khalifa boo Amber Rose sought to answer this existential quandry by following up scantily clad or fully bare photos of Kim Kardashian, Chelsea Handler, Lena Dunham, and Miley Cryus (who has made it into an art form) with her own string bikini photos on Instagram. Although Rose looks inhumanly amazing, like a walking Photoshop job, the Internet comments were predictably slut-shaming, with many critics taking her to task for being both attractive and a mother.

After the 31-year-old mom’s fans defended her right to pose in any household materials she likes (I prefer yarn for my NSFW selfies), Amber Rose lashed out at her mommy-shamers, advising them in an Instagram post to hereby “kiss [her] MILFY a** b***hes.” This is nearly the exact same dialogue that the Internet had last year, when the aforementioned Kim K’s Paper magazine cover managed to “break the Internet,” but perhaps not in the way Kardashian might have liked. By posting their nearly nudes on the Web, Rose and Kardashian are not only exposing our sexist mores when it comes to race and gender, but also our expectations of how women behave, especially mothers. We don’t just have a problem with motherhood or female sexuality—we have a problem with women.

What does it mean to be a mother in 2015? As Kim Kardashian discovered, it means that you need to cloister yourself and don a habit the moment you start showing. Throughout Kardashian’s pregnancy, critics dissed her for being too sexy, wearing unflattering clothing, and getting fat, in the time-honored tradition of every non-Cindy Crawford pregnant person ever. Star magazine mourned the socialite’s “65-pound weight gain” and “pregnancy nightmare,” while the always classy InTouch Weekly proclaimed that she “can’t stop eating!” In everyday terms, this translates to: Human woman has child inside her, craves food as is her biological imperative, and is not a magic pregnancy robot.

In an essay for the Huffington Post, Emma Gray and Margaret Wheeler Johnson argue that what we say about Kim Kardashian is important to how we view all women. “These headlines affect us all, even when we tell ourselves we aren’t paying attention, that we write them off as trash,” Gray and Wheeler write. “They leak into the cultural ether and affect how women see themselves and other women and how much time and thought and energy women put into fixing bodies that aren’t broken. When will we acknowledge that all of us, even Kim Kardashian, deserve to spend our lives thinking less about how we look and more about what we can do—and that the former definitely gets in the way of the latter?”

Ryan Reynolds could be half naked on the cover of every magazine in the country with a baby at home, but when it comes to mothers, we don’t want to see that.

As both women and mothers, however, Kim Kardashian and Amber Rose are doubly bound by our conflicting desires when it comes to women’s bodies. While we like MILFs, women often face a burden that fathers do not, that their behavior might reflect poorly on their children. Ryan Reynolds could be half naked on the cover of every magazine in the country and still have a baby at home, but when it comes to mothers, we don’t want to see that, whether it’s posting breastfeeding photos on Instagram or trying to own their post-baby bodies. North West and Rose’s son, Sebastian, might have their share of side eye for their mothers when they grow up (Amber Rose did date Wiz Khalifa, after all), but their mothers’ sexy selfies should be the least of their problems. Remember that time Kim K was in a Tyler Perry movie?

In an essay for Time, Claire Howorth explains it’s not just chauvinist dudes you swipe past on Tinder who like their women in the kitchen—it’s society itself. “We Americans like our moms and wives a certain way, for the most part,” Howorth writes. “We like them in minivans and on the sidelines—spread the Jif, not the legs. Just look at our advertisements (which have come a long way, even in my adulthood). There’s the Cadillac mom, so chic, so pulled together, so…fully dressed. There’s the series of LG Appliance ads—humorously written, but nevertheless relegating moms to the kitchen, the laundry room, the home front.”

This is why radio host Jeff Mancow once informed former Playboy bunny Kendra Wilkinson that she was no longer “sexy” after giving birth to two kids. “You don’t need to shake your ass anymore,” Mancow told her. “You’re married, you’ve got a kid, you’re a mom. You were Marilyn Monroe when I first met you; now you’re Mrs. Brady.” The shock jock further explained, “You’re a mom now, you can’t be cool as a mom… You can’t be cool with a baby hanging off you, and drool all over your shirt.” According to Parenting.com’s Sarah Preston Gorenstein, its staff once had a debate over whether Angelina Jolie had “too many kids” to still be considered sexy. (Answer: I think she’s doing fine.)

As Heather Havrilesky explains in a New York Times essay, this rhetoric is indicative of the sense of ownership many feel over mothers and their behavior—whether it’s the mythic Welfare Mom, the Tiger Mom, Honey Boo Boo‘s mom, or Amber Rose and Kim Kardashian. “Motherhood is no longer viewed as simply a relationship with your children, a role you play at home and at school, or even a hallowed institution,” Heather Havrilesky writes. “Motherhood has been elevated—or perhaps demoted—to the realm of lifestyle, an all-encompassing identity with demands and expectations that eclipse everything else in a woman’s life.”

There are a number of ways to fail at motherhood without even trying.

Havrilevsky compares it to “lugging around a giant umbilical cord,” but it’s more like a giant magnifying glass that blows up even the smallest detail to outsize proportions. While this means that moms are expected to keep it PG, there are a number of ways to fail at motherhood without even trying. When Obama was running for president in 2007 and 2008, his wife’s outspoken presence was seen as a liability to the campaign, deemed too aggressive. The New Yorker infamously depicted her as a militant Black Panther on their cover, illustrated with a ‘70s afro and a machine gun. When Michelle Obama became First Lady, she was rebranded as a Martha Stewart figure, curbing the politics for a PR-friendly healthy living campaign.

What the case of Michelle Obama shows is that our cultural panic around motherhood is really reflective of our hangups about women in general, especially those fail to conform to the narrow roles we’ve set for them. The thing that makes people most angry about Kim Kardashian isn’t that she’s naked but that she continues to be unapologetically herself, flaunting her celebrity, her privilege, and her booty in public. In the Paper magazine photo, you can see just a hint of a Mona Lisa smile on Kim K’s face; she knows what she’s doing. Similarly, Amber Rose knows she has nothing to apologize for—she’s just being herself, hanging out in a string bikini on a tropical balcony. What else do you do on a Sunday?