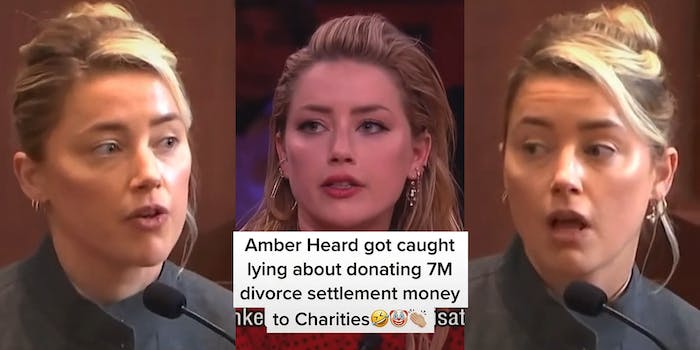 ‘I haven’t been able to fulfill those pledges because I’ve been sued’: Amber Heard sparks TikTok debate over Johnny Depp settlement donation

'She literally said she pays it in small payments annually...'

Once again the internet is on fire scrutinizing the Johnny Depp and Amber Heard defamation trial. This week, Heard is getting grilled by social media users for not yet fulfilling upon a promise to donate $7 million from her divorce settlement with Depp—which she claims she has been unable to do because she keeps getting sued by him.

On TikTok, a viral video with over 109,000 views showed Heard being intensely cross-examined on Monday by Depp’s lawyer Camille Vasquez, about a claim Heard made in a 2018 interview that she donated the $7 million that she received from her divorce settlement with Depp to the American Civil Liberties Union (ACLU) and the Children’s Hospital Los Angeles.

“You still haven’t donated the $7 million divorce settlement to charity. Isn’t that right?” Vasquez asks in the clip, cutting Heard off multiple times as she tries to respond in a heated back-and-forth.

“I use pledge and donation synonymous with one another. They mean the same thing,” Heard describes. “I haven’t been able to fulfill those pledges because I’ve been sued.”

Vasquez then criticizes Heard for not immediately donating the $7 million, which she received 13 months prior to Depp suing her.

Last month during the trial, an ACLU executive testified that more than $1 million has been donated in Heard’s name since her promise was made: $350,000 of the donations came from Heard, while $100,000 came from Depp’s divorce settlement money, and $500,000 from her ex-boyfriend Elon Musk. Yesterday, Heard claimed she planned to donate the full $7 million in increments but has been stalled due to having to allegedly pay millions of dollars in legal costs for the trial.

Users in the comments section of the viral TikTok debated the criticism of Heard. Many “pro-Depp” users commented hateful messages toward Heard, criticizing her definition of “donated,” while others defended her or complained about the trial as a whole.

“Why does this matter? This trial isn’t about finding the truth, its just about making the other person look bad, its nothing but a gossip trial,” one TikToker commented.

Twitter users are also in a frenzy debating this latest trial controversy. One viral tweet about the controversy, which received over 15,000 likes, responded to a tweet from the New York Post, which included a headline reading: “Heard admits she didn’t donate divorce settlement.”

“She literally said she pays it in small payments annually but had to stop because he keeps suing her,” the Twitter user said.

In response, many Twitter users shared their take on the donations and trial as a whole.

“Her excuse that she didn’t donate any money yet is invalid since she had it for 13 month before any lawyer and court fees ensued,” one user criticized.

“She was making the payments yearly for tax purposes. (Which she has every right to do) She paid all the way up until he sued her,” another defended.

“Lots of orgs like periodic payments bc it makes budgeting easier than huge one time payments,” a third argued.

Others reflected on the disproportionate negative social media attention directed toward Heard during the trial.

“The smear campaign is active and it’s very real,” one user tweeted.

As previously reported by the Daily Dot, Depp is suing Heard for $50 million in damages in response to her claims that she was the victim of domestic violence in a 2018 essay in the Washington Post, saying he himself was in fact the victim of abuse in their relationship. Heard claims she has only ever acted in self-defense, and is counter suing for $100 million.

Memes, jokes, reenactments, and lip-syncs of the trial have gone viral on a daily basis during the trial. Heard has faced particular sexist hate and scrutiny, with people picking apart her testimony and hashtags like #amberheardisaliar, #amberheardisapsycho, and #justiceforjohnny attracting millions of posts.

Survivors of domestic abuse have spoken out about the social media frenzy surrounding the trial, including to news outlets like NBC News, saying the media response to the trial will discourage survivors of abuse from sharing their experiences.

We’ve reached out to the TikToker (@daniiela.asmr) via comment on their viral TikTok, Twitter user (@zatannazatxra) via Twitter message, to representatives for Depp and Heard listed on their respective IMDb Pro pages.