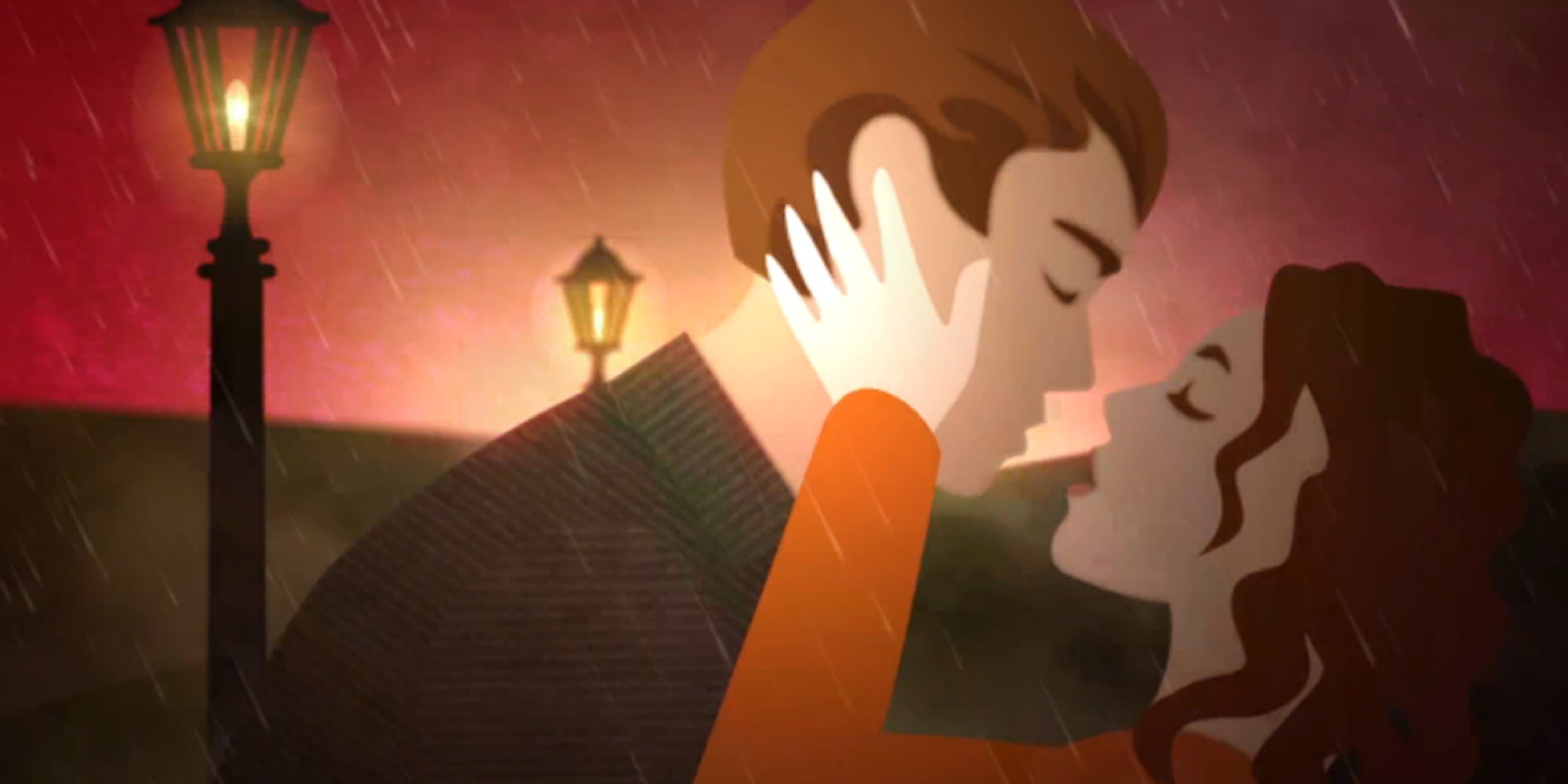 Corporate entities have woken up and smelled the fandom. Now they're all over it.

What an earth-shattering week this has been for fandom. In the space of a few days, we suddenly have two incredibly huge corporate entities, Amazon and Yahoo, actively courting major chunks of fandom culture—for better or for worse.

Maybe instead of “suddenly,” I should say “inevitably.” 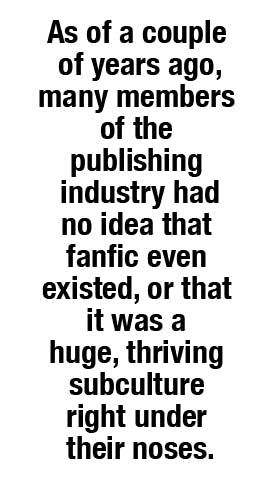 As of a couple of years ago, many members of the publishing industry literally had no idea that fanfic existed, or that it was a huge thriving subculture right under their noses.

I’m not exaggerating. The publishing industry literally did not know about fanfic. In 2010 I attended the first annual Book Blogger Con, which attracted a number of publishing industry denizens who were in New York as a part of Book Expo (which later took control of the blogger convention). During the opening panel, keynote speaker Maureen Johnson polled a ballroom full of members of the publishing industry. She asked them if any of them had ever heard of “fanfiction.”

Only about 15% of the room raised their hands.

This was 2010, two years after Lawrence Lessig’s important book Remix identified “remix culture” as a key part of Internet culture. Two years after the Organization for Transformative Works was founded and created the Archive of Our Own; five years after YouTube was created; and eight years after J.K. Rowling gave out awards to her favorite fanfiction archives on her short-lived website.

They were the whales and we fans were the barnacles. They were so essential to us, such a huge part of our culture. And they literally did not know we existed. 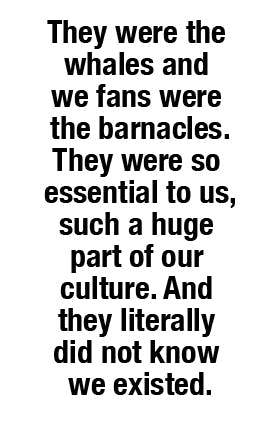 Ever since that moment (three years ago this week), I have watched the publishing industry struggle to acknowledge the existence of fanfiction, only to be confounded by it in the wake of Fifty Shades. What followed after Fifty Shades was a series of ongoing attempts by the publishing industry to capitalize on a trend it had only just begun to understand. The subsequent race to capitalize on fanfiction made it only more obvious how absolutely and utterly blindsided by fanfiction they were, making decisions that showed their ignorance of the wider culture.

One “popular” fanfic on Movellas, for example, got a much-publicized publishing deal—despite having hit counts that paled in comparison to the biggest hits on Archive of Our Own, much less Wattpad. (It eventually sputtered out and died as an e-book-only offering.) Members of the publishing industry who were also active in fandom privately complained to me that editors in their own circles didn’t seem to have any idea that fanfiction wasn’t just poorly spelled Bella and Edward couplings on Fanfiction.net, or to realize that many works of fanfiction rivaled acclaimed published works in their literary skill and level of critical reflection. They simply didn’t know about the numerous established fandom-based e-book presses that had turned “pull to publish” fics into a cottage industry. They didn’t know where to find the good porn. They didn’t know anything except that Fifty Shades of Gray was fanfiction. And they had no idea what that meant. 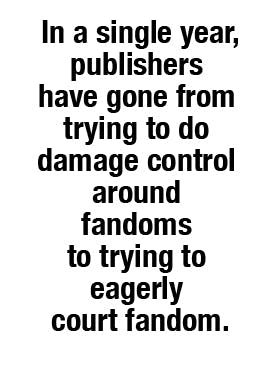 Prior to Fifty Shades, if publishers knew about fanfiction at all, it was because they had heard horror stories of fans suing authors for plagiarism; of authors having to hide their fandom identities; of authors “graduating” from fandom and leaving it behind like a cast-off shoe. Fandom was something to overcome if you were a writer from fandom, something to be wary and mindful of if you were an author who had a fanbase.

Now, in a single year, publishers have gone from trying to do damage control around fandoms to trying to eagerly court fandom. We can see this, for example, in the total about-face that writer Orson Scott Card did last year regarding fanfiction. Card is a lifelong, vehemently anti-fanfic opponent who once compared it to someone stealing his house. Last year, in a complete reversal of his position, he hosted a fanfic contest. I doubt this was because his personal opinion has changed—not with views as adamant and oft-stated as his. No, it was much more likely because he realized, in a post-Fifty Shades publishing environment, that the publishing industry was starting to play ball with fans on an entirely different level. If he didn’t warm up to fanfic, he might start (or perhaps already was) facing hostility from both fans and publishers wanting him to let bygones be bygones.

This is hardly the first time outsiders have tried to capitalize on fandom. Corporate-sponsored fanfiction contests are notorious within fandom for doing exactly what Amazon is now attempting to do with Kindle Worlds: insisting that while fans write the stories, the copyright belongs, not to the author, but to the corporation. Last year a similar contest from Random House prompted a strongly worded note of caution from the Organization for Transformative Works, a non-profit advocacy group for fandom that tries to protect fans from the ways corporations may try to exploit them.

As John Scalzi pointed out yesterday, Amazon and its participatory partner Alloy are inviting fans to write “media tie-in writing done with intentionally low bars to participation.” Along with that comes all kinds of shameless corporate exploitation, just as we’ve seen countless times before:

[T]here’s a difference between writing fan fiction because you love the world and the characters on a personal level, and Amazon and Alloy actively exploiting that love for their corporate gain and throwing you a few coins for your trouble.

Six years ago, a short-lived company called Fanlib disastrously tried and failed to do what Amazon is doing now. At the time, Fanlib—which invited fans to contribute storylines to shows and ongoing franchises—was roundly condemned by fandom, and ultimately died a quiet death.

Times have changed since then, however. Fandom is bigger, broader, younger, and less able to circulate its hard-won wisdom (and wariness) to younger communities. In addition to the mainstreaming of fandom and the increased interest in fandom on the part of corporate marketing departments, two websites have essentially brought about a fandom generational shift: Tumblr and Wattpad. 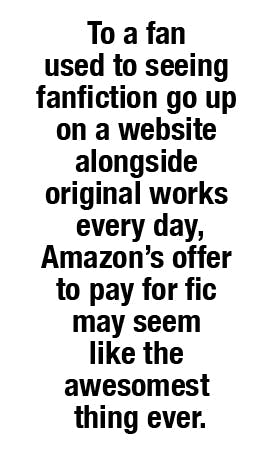 It’s hard to describe to old-school members of fandom—who are used to fanfiction being a quiet, out-of-the-way subculture—just how big Wattpad has become. In addition to posting astronomical reader statistics, Wattpad is part of a new group of free websites, including Movellas and Figment, that allow fanfic to be posted alongside free original works.

Most Wattpad users have never heard of the AO3, OTW, or Fanlib. The typical Wattpad user is in their teens or tweens. She has no idea of the decades that fans spent fighting for rights that may seem basic now but were huge concerns even ten years ago: the right to be left alone; the right to freely publish fanfiction without fear of having an entire archive shuttered by a corporation; the right to exist.

To a fan without that history, used to seeing fanfiction go up on a website alongside original works every day, Amazon’s offer to get paid for fic will probably seem like the awesomest thing ever.

And who’s to say a thirteen-year-old will care about having their copyright taken away from them?

At best, the rest of the publishing industry will warily watch what happens with this program, and learn from its success or failure.

At worst, they’ll rush cluelessly in to try to mimic it, just as they’ve rushed cluelessly around searching for profitable fanfics for the last year.

Either way: fans, hold on to your hats. And your copyright. It’s going to be a bumpy, fascinating ride.