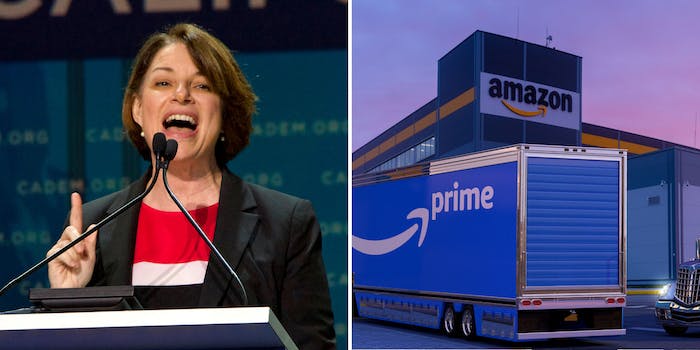 'Amazon decided that it wanted to take over and dominate the package delivery market.'

Tech advocates are refuting Amazon’s renewed attacks on the American Innovation and Choice Online Act (AICOA) as the tech giant insists the bill would degrade its Prime service and the Amazon user experience.

Amazon and industry-backed lobbying groups have been critical of the AICOA before. In November of last year, Chamber of Progress, a group funded by Amazon, said in a blog post the bill would “eliminate both the funding model and logistics model that make Prime possible.”

The AICOA is a new antitrust bill working its way through Congress. It was originally introduced last year, as a part of President Joe Biden’s push to regulate big tech, but was revised and reintroduced in March. It would ban numerous anti-competitive business practices from the likes of Apple, Google Microsoft, and Amazon, but some critics have said the bill may do more harm than good.

Amazon’s argument against the bill hinges on its ability to house Prime products in-house via its Fulfillment By Amazon program. The program allows small sellers to offer Prime to their customers by allowing Amazon to store, package, and ship their products for a per-product fee. Under the bill, Amazon says, they would be unable to offer the fast shipping that users have come to expect from Prime.

“In other words, [Sen. Amy] Klobuchar’s bill would break the essential link between Fulfillment by Amazon—where merchants pay a fee to participate—and Amazon Prime, where Amazon’s ability to fulfill orders in-house is key to them arriving within two days,” the blog post said.

The AICOA passed out of committee last year, but was amended and was reintroduced to the Senate in March by Sen. Amy Klobuchar (D-Minn), sparking a renewed interest in the bill—and renewed critiques from Amazon.

In a recent blog post, the company said the bill would mandate Amazon “allow other logistics providers to fulfill Prime orders” making it “difficult, and potentially impossible in practice” to offer two or one-day shipping. The company claims the changes the bill would implement would “materially hurt” not just Amazon, “but, more importantly, every American consumer and small business that currently relies on the Prime service.”

Amazon’s fast delivery has been met with criticism in recent years, as Amazon delivery drivers begin to share their experiences with the company. Long hours, awful working conditions, and abuse from customers have been documented on TikTok and Reddit, turning the public against the tech giant. Now, with a union push and lawsuit upon lawsuit, public support of the company has waned—even as Americans’ usage of Prime has not.

The fervent opposition to the bill by Amazon has been met with skepticism by tech advocates, who claim the bill would help small businesses, not hinder them. In a tweet thread, Stacy Mitchell, co-director of the Institute for Local Self-Reliance—a tech advocacy group—said the bill would force Amazon to actually compete.

“Right now, Amazon forces its captive base of sellers to use Amazon’s own shipping and storage services. If sellers don’t, then their items aren’t eligible for Prime, which means their sales plummet,” she said. “Many of these businesses would prefer to use another shipper, like UPS or the Postal Service, because it would be cheaper or better for their items. But they’re stuck with Amazon’s fulfillment, even as Amazon keeps jacking up the fees it charges them.”

Amazon has consistently raised fees to sell on its platform for small businesses while forcing them to use its in-house shipping in order to be Prime-eligible. It’s costing sellers more and preventing them from choosing how to deliver products to consumers.

Mitchell says Amazon’s claim of degradation of the Prime shipping experience is “burst-out-laughing absurd,” pointing out that, until recently, Amazon used third-party shipping carriers to fulfill its one- and two-day deliveries.

“Nothing has changed over at UPS, FedEx, or the Postal Service,” she said. “What changed is that Amazon decided that it wanted to take over and dominate the package delivery market.”

Mitchell points to the now-defunct Seller Fulfilled Prime program, which allowed sellers who consistently met Prime delivery times using third-party shippers to get the Prime label on the website. But in 2019, Amazon decided to shutter the program, attempting to strong-arm sellers to use its own fulfillment program instead.

The AICOA could open that option back up to a number of sellers, potentially saving them from the high fees Amazon is charging.

“Lo and behold, Amazon’s market share in shipping soared,” she said. “Amazon has surpassed FedEx and will soon overtake UPS and even USPS, as the biggest package shipper in the US.”

Amazon is pushing to kill a bill that will, according to proponents of the bill, largely help small businesses, other shipping companies, and—most of all—consumers.

By appealing to Americans who have become overreliant on Prime, Amazon is hoping to continue to hold on to its monopoly for as long as it possibly can.