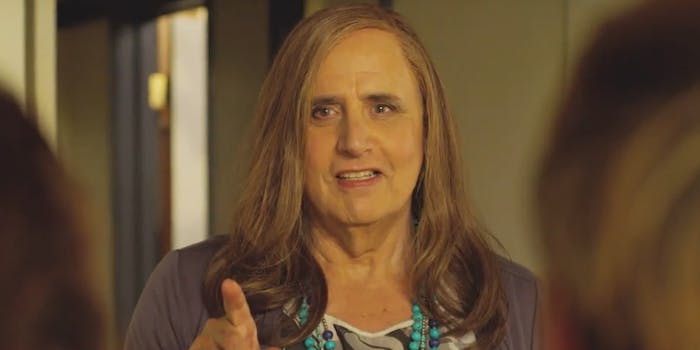 With Transparent and The Cosmopolitans, the best new TV shows are on the Internet.

In the Internet programming wars, Amazon remains the definite dark horse. Not only do they lack the cache of Netflix, they’re a long way from having anyone equate them to their significant other. But with their new pilot season upon us, it’s clear that we shouldn’t count out Amazon as a content provider just yet.

When it came time for Netflix to announce themselves as a contender in the original programming game, they did it by hiring big guns to back them up. With House of Cards, they brought in buzzy playwright Beau Willimon, who was assisted by Hollywood heavyweights Kevin Spacey and David Fincher. Meanwhile, Orange Is the New Black creator Jenji Kohan was coming off of her immensely successful Showtime series Weeds, which was on for eight seasons (despite perhaps dipping in quality toward the latter half of its run).

But Amazon has searched for talent in slightly more surprising places. One of their most interesting new pilots, The Cosmopolitans, arrives courtesy of indie director Whit Stillman, who gushed about how great it is to work with them this week in an interview with the New Republic. And they made an even bigger gamble when they bet on veteran TV writer Jill Soloway, who brought them her critically acclaimed new series, Transparent, about a family whose patriarch (Jeffrey Tambor) makes the decision to transition late in life.

Although audiences have yet to generate the kind of excitement for Amazon originals that they’ve exhibited towards Netflix’s flagship series, a roar is beginning to grow. TIME Magazine just named Transparent (the first season of which will debut in full come late September) the best new show of the season. And with The Cosmopolitans potentially joining their wheelhouse, too, Amazon is slowly making a legitimate name for itself in the brave new world of streaming television.

To reiterate, Amazon’s method for finding creativity seems to be built at least in part on enlisting entertainment industry underdogs. At first glance, Soloway isn’t such an unconventional choice. She spent years as a scribe on Six Feet Under and The United States of Tara before being handed her own show. But prior to Transparent, Soloway wrote and directed the film Afternoon Delight, which proved to be a critical and commercial disappointment (though it does have its ardent fans).

But beyond Soloway herself, Amazon’s real daring in pursuing a show like Transparent is how completely dissimilar it is from anything else out there. Soloway’s own father came out as transgender three years ago, but she has stated that the series is not strictly autobiographical. Instead, her goal is to explore issues of gender in a multifaceted way. And the most exciting part in all of this is that Soloway has committed to involving people of the trans* community at every level of the show’s production.

For allowing her the ability to make a show so incredibly bold in its aim, Soloway has given Amazon a lot of credit. The Daily Dot’s Rae Votta and Nico Lang attended a screening of Transparent at Outfest earlier this year, where they reported that, “Soloway revealed that Amazon Studios offered an unexpected deal—if it didn’t develop the series, she could take it back. She listed that as one of the defining reasons she’s happy bringing her show to air with Amazon.”

In addition to this special deal, Votta and Lang noted, “Amazon has given Soloway and her cast an incredible amount of freedom in telling this story the best way they know how. Perhaps this is why parts of the pilot feel like almost nothing else on television, unfolding more with the precision of an independent film (à la Nicole Holofcener) than anything you’d see on NBC’s lineup.”

Indeed, Soloway herself has said as much, too. While discussions around House of Cards paint the show as being overtly cinematic, it looks exactly like any other “dark” drama you would see on HBO, compared to Transparent, which Soloway describes as, “like a five-hour movie more than 10 episodes.”

This quality is present in The Cosmopolitans as well. Amazon’s first high profile attempt at original programming, the Washington D.C. comedy Alpha House from “Doonesbury” cartoonist Garry Trudeau, felt like a cross between the “insider knowledge” angle of House of Cards and the biting political satire of Veep. But The Cosmopolitans and Transparent are different. It’s almost easier to imagine discovering them in an arthouse theater, as opposed to at home on your Roku. And in many ways, the pilot of each show unfolds more like the first act of a movie than the first episode of a TV show.

This makes a bit of sense where Stillman is concerned, since he comes from movies, though he’s hardly your conventional Hollywood director. After a string of indie classics in the ‘90s, Stillman went thirteen years without making a thing, following his period comedy The Last Days of Disco in 1998. His comeback was to be 2011’s Damsels in Distress, but similar to Soloway’s recent effort at feature filmmaking, Damsels underwhelmed at the box office.

Now, Stillman has echoed Soloway in his praise of Amazon as a work environment, especially compared to other experiences he’s had with TV in the past. In his interview with the New Republic, he elaborates:

After Last Days of Disco I thought, I’d really like to work in TV where I can just keep going with the same characters and not have to reinvent the wheel every couple of years. So I was working with these big production companies to write scripts that they would then take to a network, but nothing ever comes of it. I once asked how these companies could afford to commission so many scripts they didn’t do much with, and they said, ‘One word: Seinfeld.’ But it was this crushing feeling, like you’re working in a void and by the time you turn a script in, no one’s paying attention.

It was different with Amazon because you really feel close to the printing press. It’s like being in a college newspaper, like the Harvard Crimson, where we had three printing presses downstairs. I already had a relationship with Amazon because one of the first things they had done was option Metropolitan for a remake. They wanted something in Paris, and I was really keen on it, and then we shot it very quickly.

What Amazon is doing in hiring these unlikely showrunners is building their own brand of auteur television. They may not be as flashy as Netflix, but the people they’ve got behind them have strong visions, and they’re trusting those people to help set them apart from the rest of the pack. Basically, within the streaming landscape, Amazon is becoming the Showtime to Netflix’s HBO. These networks also went through a fierce rivalry, in the struggle to dominate the premium cable audience, but today, they successfully exist apart from each other. They each have shows that are audacious, profitable, and uniquely their own.

And the one thing that Amazon has fortunately adopted from Netflix is their distribution model. At least with Transparent, they will be releasing all the episodes at once. This is a wise move; although Amazon’s crowdsourcing method of television (users vote on pilots to determine which ones will go to series) is still an intriguing idea, their confusing decision to release three episodes altogether, and then one a week after that, has seemingly held them back in a binge-hungry market.

Although the future of The Cosmopolitans is for the moment uncertain, if Amazon users can greenlight a show like Transparent, then the possibilities for their future as a content provider are thrilling. It’s too late for Amazon to be Netflix, and thankfully, they now appear to know that. But by bringing in extraordinary visionaries like Stillman and Solloway, they are well on their way to creating a distinctive, stable brand all of their own.

And why should we expect any less? They’re already taking over the world—they should at least be able to provide us with some great television while they’re at it.