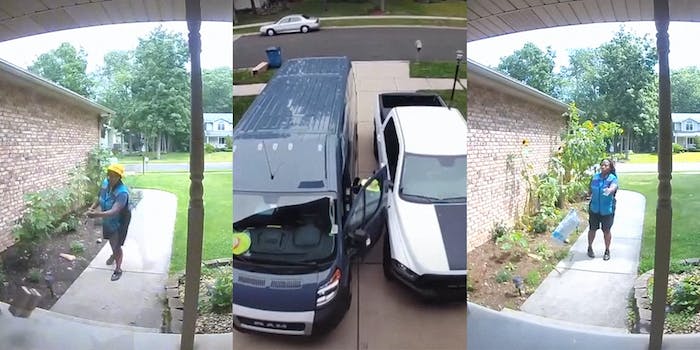 'She's literally everything the training videos say NOT TO DO.'

Thanks to the magic of Ring doorbell footage, a TikToker got to share a montage of clips that didn’t reflect well on Amazon. Most of them feature the same delivery driver throwing packages on different days, topped off by video showing an Amazon delivery truck that’s dinged a car in the driveway with its door.

The video comes courtesy of TikToker @sayo.sameshima, who has generated more than 3.3 million views in just a single day up on the platform.

The approximately 45 second video shows four different package tosses from the same Amazon delivery driver, along with an amazing phone conversation she appears to be having as she delivers a package that appears to be too large and heavy to throw.

“I don’t know what you want me to do,” she repeats several times, before pivoting to, “I don’t know how I do anything wrong in the bed! I don’t get that!”

“All you do is criticize me,” she goes on to say, before adding a “WTF” and a “come on, now” to punctuate her thoughts.

Commenters going to the TikTok were amazed by the delivery person’s style and panache, with one remarking, “I feel like she’s using more energy doing everything wrong than if she just did it the right way.”

Another, in that same vein, noted, “She’s literally everything the training videos say NOT TO DO.”

One person asserted, regarding the last scene, “You’re not even supposed to park in the driveway. Amazon rule.”

A number of people wondered how the person in question was still employed, and the creator appeared to shed some light, tagging in another TikToker who noted, “She was turned in 3 times, we finally don’t see her anymore, kinda miss her antics lol.”

She did have some admirers. One commenter shared, “First of all, I like her.”

The Daily Dot has reached out to Amazon for comment.

Update 7:18 am CT Sept. 12: Sameshima got back in touch with the Daily Dot, and directed us to a friend whose daughter uploaded the original video to Facebook. That friend then put it up on TikTok, noting, “We thought maybe a couple hundred likes would happen,” and when it got taken down for a community guidelines violation, Sameshima then put it up on hers. The parent and daughter, who live in a Chicago suburb in Indiana, don’t know the whereabouts of the Amazon driver.

“No, we complained twice (the truck and throwing) asking for our packages to stop being thrown and her not to pull in drive way, and she was still our delivery lady,” the parent said, “After the 3rd complaint, we haven’t seen her last couple deliveries.  And yes we got lots of deliveries lol, I broke my leg beginning of June, so was dependent on online for a bit.”

The original TikTok video has been made private.