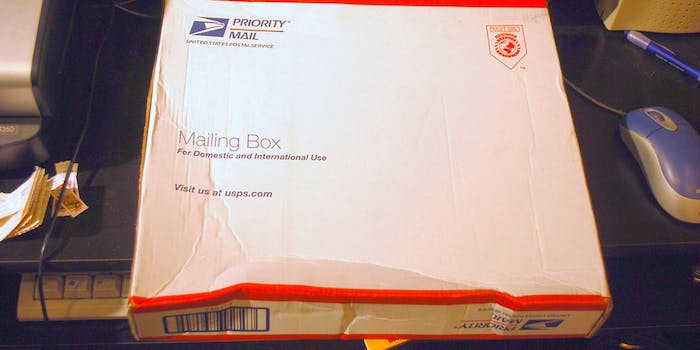 So, your company’s attempt at a movie-related marketing campaign turns into a discussion about the incompetence of your employees.

On March 25, user alientity took to r/videos to ask the rhetorical question, “Hey USPS employees, is this an accepted delivery method?” It accompanied a rather revealing video, “Lazy USPS Driver throws heavy box with hard drive against garage door.”

Fellow redditors suggested that alientity take to social media to rectify the issue. After all, it seemed to be the method of choice for New York City resident Derek Smith, who recently took to Twitter to call out his apartment building’s property management company for deplorable living conditions.

It was redditor marwynn, however, who suggested using an existing Twitter hashtag to really drive the point home to the USPS.

“Have you tweeted USPS? They’re running their #AmazingUSPS thing now (Spider-man related) and this would be a great way to get your concerns heard. This is unacceptable,” marwynn said.

Within hours, a search for the #AmazingUSPS hashtag did not bring up results related to the postal service’s role in the upcoming Amazing Spider-Man 2 movie. Instead, such a search brought up the latest discussion about alientity’s plight, copies of the video itself, and, of course, other users’ issues with the postal service.

#AmazingUSPS Just look at the amazining service! No wonder postal is dying. @USPS

Glad this #USPS isn’t my guy! http://t.co/dhcee3C5PD #AmazingUSPS is this standard?

64GB SD card mailed 2/21, delivered on 3/20… without the SD card. But they did give me a nice sticker #AmazingUSPS pic.twitter.com/ZigJHZngwz

It’s the beginning of a PR nightmare. So far, USPS has yet to publicly respond.

Image via Paul Sullivan/Flickr (CC BY 2.0)