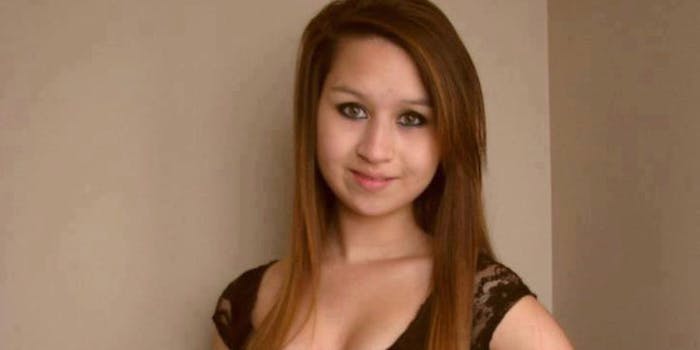 The suspect was arrested in January for indecent assault and child pornography. The man’s lawyer, Christian van Dijk, told the Associated Press Thursday that one of his client’s alleged targets was “a 15-year-old girl from British Columbia.”

That girl is almost certainly Amanda Todd, the Canadian teenager whose plea for help on YouTube went viral in 2012. In it, she detailed the online stalking, blackmail, and harassment that led her to sex and drug use and, eventually, suicide attempts.

Todd’s suicide had an enormous impact on the Web and put a national spotlight on cyberbullying. What happened to her was much worse than bullying, however.

During a news conference about the suspect’s arrest Thursday afternoon, Carol Todd, Amanda’s mother, held back tears. “This is truly a day that we’ve been waiting for,” she said. “I always knew deep in my heart that what my daughter told was the truth.”

Amanda Todd’s story begins in late 2010. While video-chatting on a teen hub called BlogTV, she was asked to flash the camera. She did. Users took screengrabs of her over the span of a couple days, then uploaded the footage and posted links in a separate chatroom.

BlogTV was a popular site for young teens, and there were special rooms for users aged 13 to 15. Nudity was against the rules, but the site was poorly moderated, which made it an attractive place for pedophiles to lurk.

Todd, who had just turned 14, quickly began receiving threats from an unnamed man. He demanded that she strip for him in private, and he told her he would send photos of Todd to her friends and family if she refused. He made good on his threat. The man stalked Todd on the Web for two years, mostly on Facebook, demanding more private cam shows. Anonymous, the Internet vigilante group, took up Todd’s cause and quickly identified a young man named Kody Maxson as its suspect. It released its evidence along with Maxson’s personal information. Much of it, including his address and employment history, was inaccurate. The RCMP quickly wrote off Maxson as “a person of no interest.”

But if Maxson wasn’t directly, personally responsible for Todd’s harassment, he was tied to the group that was.

As I reported in 2012, Amanda Todd herself even leaked Maxson’s name to an anonymous informant. There is additional evidence that Maxson ran with a group of pedophiles and stalkers, called “cappers,” that had a long history of sexually exploiting teens, and he was in contact with Amanda Todd while she was blackmailed. Maxson also faced unrelated criminal charges of sexual assault and sexual interference with a minor, and and was notorious in this community for blackmailing other young women. In 2010, he was awarded Blackmailer of the Year by the webseries The Daily Capper, which documented the cappers’ activity during that time period.

In 2012, Maxson told the Vancouver Sun that Todd’s real stalker was a man known as Viper, a “capper” believed to be around 40 years old who had ties to at least one 14-year-old girl. The Daily Capper described Viper as “a role model for Kody.”

The Washington Post reports that the suspect has dual Dutch and Turkish nationality. He has been in detention since a January arrest in a vacation house in Oisterwijk. He has no wife or children.

The suspect’s lawyer, Van Dijk, said he doesn’t believe prosecutors have the evidence to make a conviction. He also suggested his client’s computer may have been hacked.

The RCMP has been criticized for mishandling Todd’s case. A friend of the family told me that the police “failed Amanda. … They did not take over her social media like they should have.” Police could have posed as the victim to entrap the predator, she said. A CBC documentary, The Sextortion of Amanda Todd, has argued the same.

On Twitter, civic advocate Sandy Garossino called on Canada to extradite the suspect. Others criticized Facebook for not being able to adequately control abuse.

Will Canada seek extradition of accused in #AmandaTodd? Dozens of other victims & other countries also apparently involved.

Facebook is valued at $150 BILLION. It should be able to block anonymous adult predators from blackmailing little kids. #AmandaTodd

If there’s one thing we can take away from these charges—child pornography, extortion, criminal harassment and Internet luring are four of the five—it’s that cyberbullying is just the beginning of the threats posed to teenagers, especially teenage girls, on the Internet.