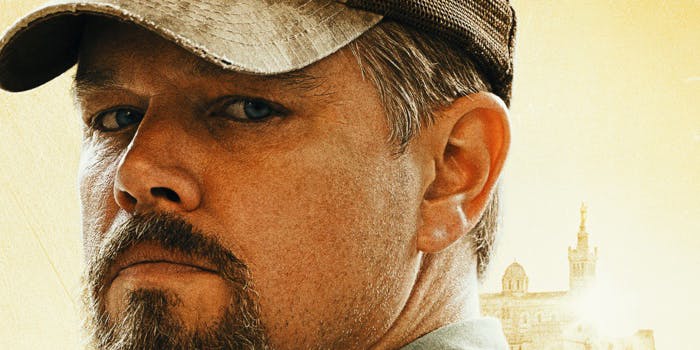 ‘Does my name belong to me?’: Amanda Knox criticizes ‘Stillwater’ using her life to promote the movie

She also highlights an ethical issue cropping up with true crime narratives.

Amanda Knox has spoken out about Stillwater using her name and story to promote the film, which has launched a larger discussion about the ethics of true crime narratives and using real-life inspiration for fictional stories.

Stillwater stars Matt Damon as an Oklahoma father who takes matters into his own hands after his daughter Allison (Abigail Breslin) is serving a nine-year sentence in a French prison for murdering her girlfriend, a crime that Allison says she didn’t commit. Directed by Academy Award winner Tom McCarthy, it debuted at Cannes earlier this month before being released in theaters.

While Stillwater’s story is fictional, it had at least one connection to real-life events. McCarthy acknowledged that he was initially inspired by Amanda Knox, the American college student convicted of murdering her roommate Meredith Kercher while studying abroad in Italy before her conviction was eventually overturned by Italy’s highest court. Press notes for Stillwater also state that McCarthy was “one of the many people who found himself fascinated by the details of the 2007 Amanda Knox case, although those press notes don’t include any mention of Knox’s case being overturned.

McCarthy further highlighted the connections between Stillwater and Knox in an interview with Vanity Fair. He noted that he and fellow writers Thomas Bidegain and Noé Debré used the barebones of Knox’s story, “an American woman studying abroad involved in some kind of sensational crime and she ends up in jail,” and then came up with a fictional story.

“There were so many characters around the case that I really followed pretty closely,” McCarthy explained. “But really the first thing that I took away from it was, what would that be like as an American student to go over [to Europe] for what should be one of the most exciting moments in a young-adult life and to find yourself in that tragedy? There were just so many layers to that story that kept anyone who was following pretty riveted…. Who are the people that are visiting [her], and what are those relationships? Like, what’s the story around the story?”

In the wake of McCarthy’s interview and the film’s release, Knox addressed the connections to her in a lengthy Twitter thread (which she also published as a Medium post) in which she called out the film for profiting “off my name, face, and story without my consent.”

“This new film by director Tom McCarthy, starring Matt Damon, is ‘loosely based’ or ‘directly inspired by’ the ‘Amanda Knox saga,’ as Vanity Fair put it in a for-profit article promoting a for-profit film, neither of which I am affiliated with,” Knox wrote. “I want to pause right here on that phrase: ‘the Amanda Knox saga.’ What does that refer to? Does it refer to anything I did? No. It refers to the events that resulted from the murder of Meredith Kercher by a burglar named Rudy Guede. It refers to the shoddy police work, prosecutorial tunnel vision, and refusal to admit their mistakes that led the Italian authorities to wrongfully convict me, twice.”

In her thread and post, Knox takes issue with several aspects of how Stillwater uses her story to prop itself up. She pointed not just to the Vanity Fair article but several Stillwater pieces (such as a Deadline review and a New York Times profile of Damon) that frame her as a convicted murderer when her conviction was overturned. She added that Stillwater “is by no means the first thing to rip off my story without my consent at the expense of my reputation” and had to sue Lifetime over its film about her.

Knox also resents that she’s blamed for how Kercher’s murder is framed and named after her by the press, adding that changing how we talk about these events—perhaps putting the focus on Kercher or Guede—could help to change that. It already happened with what some are now calling one of President Bill Clinton’s sex scandals versus using Monica Lewinsky’s name.

But Knox also highlights that Stillwater is just one of several instances where someone was inspired by her life and created their own work around it without reaching out to her. She says the Fox show Proven Innocent (whose premise was “What if Amanda Knox became a lawyer?”) only reached to her right before the show debuted to get her to promote it. The author Malcolm Gladwell wrote about her in one of his books and only reached out only to get permission to use Knox’s audiobook in his own audiobook. McCarthy, his writers, and Damon didn’t reach out to her either.

In her post, Knox further illustrates just how a movie like Stillwater, despite only partly inspiring the story, could harm her reputation and open her up to harassment despite having zero involvement with the film. Conspiracy theories around Kercher’s death and the belief that Knox still knows something about the case still follow her to this day.

What Knox’s thread does is open up a conversation, one that has already been happening in the true crime world: What moral obligation do people have to the subjects of these stories when those stories inspire things like podcast deep dives or the plots of movies? And when people do tell these stories, who we. True crime podcasts, in particular, have faced plenty of criticism in recent years for either not giving enough focus to victims or for not reaching out to the family or friends of murder victims. (Just last month, a planned podcast surrounding Vincent Chin’s murder was canceled after Chin’s family and the journalist whose work helped to spark the activists who demanded justice weren’t contacted.)