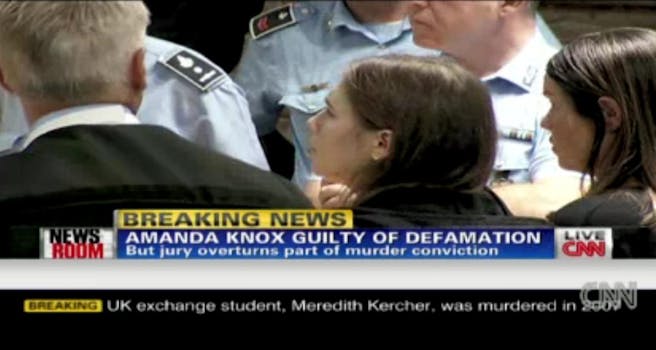 A judge and jury overturned the conviction of American Amanda Knox, convicted in Italy of murdering her roommate. People on Twitter celebrated.

After spending four years in jail, Amanda Knox is free.

Knox was convicted in 2009 in Italy of murdering her British roommate in 2009. A judge and jury overturned that conviction today — and people turned immediately to Twitter, mostly to celebrate.

The court did uphold her conviction of defamation against  Patrick Lumumba, an early suspect in the case, according to CNN. That crime carries a sentence of three years. Because Knox already served four, she was free to go. Knox and her ex-boyfriend Raffaele Sollecitoto were to be released from prison in Perugia, Italy, reported CNN.

In the United States, and around the world, Knox has been a top trending topic with multitudes of people praising her release. Since 4 p.m. ET, only minutes after the appeals verdict was read in Italy, Knox has been mentioned more than 15,000 times, according to statistics from Topsy, a social media search engine.

“No evidence! The prosecutor was CRAZY! He made up the same story for multiple cases. its only right that she was set free! #AmandaKnox,” tweeted @officialerikak.

On Dec. 4, 2009, an Italian panel of judges convicted Knox for the murder of her roommate Meredith Kercher.  Also convicted was Rudy Guede, an Ivory Coast native, according to CNN.

Knox’s arrest, and her conviction, captured the world media’s attention and even inspired to a made-for-TV movie called “Amanda Knox: Murder on Trial in Italy.” Her courtroom appearances were televised and heavily scrutinized, which was very similar to the O.J. Simpson murder case.

Simpson was found not guilty 16 years ago today in the deaths of his ex-wife Nicole Brown Simpson and her friend Ronald Goldman, according to the New York Times.

This may not, however, be the end of the line for Knox.  “Either side can appeal this court’s ruling to Italy’s High Court, but such an appeal would be on narrow technical grounds only,” according to CNN.