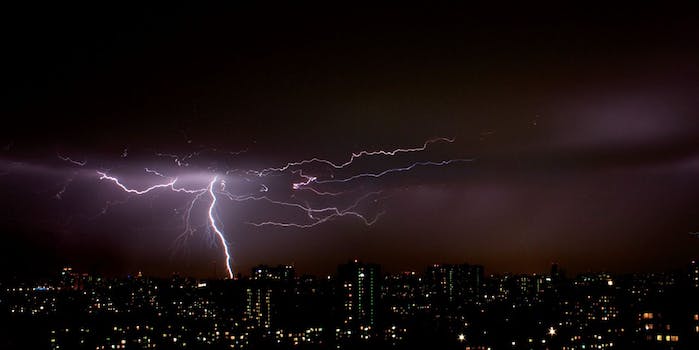 What an electric moment.

When there’s a hail storm brewing but circumstances call for you to be out in the elements, using an aluminum pan to protect yourself from the stony precipitation might not be the worst idea ever conceived.

But when lightning is added to the mix, it’s probably actually better to stay put than risk a higher chance of electrocution from said lightning.

Unfortunately for the dude in the GIF below, that knowledge came too late.

Redditor IVIIRAGE was apparently on the scene at the time. The incident occurred at the University of Texas-San Antonio last week, IVIIRAGE wrote, and thankfully “the guy under the aluminum pan was alright. His thought process was the pan would block the softball size hail we were getting. He didn’t think it through.”

Clearly. IVIIRAGE also said that the pan-wearing dude wasn’t hit by lightning but that “it was close by.”

We haven’t yet heard from Aluminum Pan Guy, but here’s hoping he’ll know what to do in the future when it’s lightning outside: wait for the bad weather to stop, use an umbrella instead of something metallic. Also, never become a demagogue and run for public office.